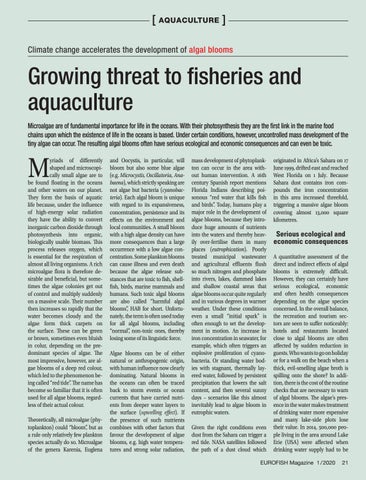 Growing threat to ďŹ sheries and aquaculture Microalgae are of fundamental importance for life in the oceans. With their photosynthesis they are the ďŹ rst link in the marine food chains upon which the existence of life in the oceans is based. Under certain conditions, however, uncontrolled mass development of the tiny algae can occur. The resulting algal blooms often have serious ecological and economic consequences and can even be toxic.

yriads of differently shaped and microscopically small algae are to be found floating in the oceans and other waters on our planet. They form the basis of aquatic life because, under the influence of high-energy solar radiation they have the ability to convert inorganic carbon dioxide through photosynthesis into organic, biologically usable biomass. This process releases oxygen, which is essential for the respiration of almost all living organisms. A rich microalgae flora is therefore desirable and beneficial, but sometimes the algae colonies get out of control and multiply suddenly on a massive scale. Their number then increases so rapidly that the water becomes cloudy and the algae form thick carpets on the surface. These can be green or brown, sometimes even bluish in colur, depending on the predominant species of algae. The most impressive, however, are algae blooms of a deep red colour, which led to the phenomenon being called â&#x20AC;&#x153;red tideâ&#x20AC;?. The name has become so familiar that it is often used for all algae blooms, regardless of their actual colour. Theoretically, all microalgae (phytoplankton) could â&#x20AC;&#x153;bloomâ&#x20AC;?, but as a rule only relatively few plankton species actually do so. Microalgae of the genera Karenia, Euglena

and Oocystis, in particular, will bloom but also some blue algae (e.g. Microcystis, Oscillatoria, Anabaena), which strictly speaking are not algae but bacteria (cyanobacteria). Each algal bloom is unique with regard to its expansiveness, concentration, persistence and its effects on the environment and local communities. A small bloom with a high algae density can have more consequences than a large occurrence with a low algae concentration. Some plankton blooms can cause illness and even death because the algae release substances that are toxic to fish, shellfish, birds, marine mammals and humans. Such toxic algal blooms are also called â&#x20AC;&#x153;harmful algal bloomsâ&#x20AC;?, HAB for short. Unfortunately, the term is often used today for all algal blooms, including â&#x20AC;&#x153;normalâ&#x20AC;?, non-toxic ones, thereby losing some of its linguistic force. Algae blooms can be of either natural or anthropogenic origin, with human influence now clearly dominating. Natural blooms in the oceans can often be traced back to storm events or ocean currents that have carried nutrients from deeper water layers to the surface (upwelling effect). If the presence of such nutrients combines with other factors that favour the development of algae blooms, e.g. high water temperatures and strong solar radiation,

mass development of phytoplankton can occur in the area without human intervention. A 16th century Spanish report mentions Florida Indians describing poisonous â&#x20AC;&#x153;red water that kills fish and birdsâ&#x20AC;?. Today, humans play a major role in the development of algae blooms, because they introduce huge amounts of nutrients into the waters and thereby heavily over-fertilise them in many places (eutrophication). Poorly treated municipal wastewater and agricultural effluents flush so much nitrogen and phosphate into rivers, lakes, dammed lakes and shallow coastal areas that algae blooms occur quite regularly and in various degrees in warmer weather. Under these conditions even a small â&#x20AC;&#x153;initial sparkâ&#x20AC;? is often enough to set the development in motion. An increase in iron concentration in seawater, for example, which often triggers an explosive proliferation of cyanobacteria. Or standing water bodies with stagnant, thermally layered water, followed by persistent precipitation that lowers the salt content, and then several sunny days â&#x20AC;&#x201C; scenarios like this almost inevitably lead to algae bloom in eutrophic waters. Given the right conditions even dust from the Sahara can trigger a red tide. NASA satellites followed the path of a dust cloud which 

Serious ecological and economic consequences A quantitative assessment of the direct and indirect effects of algal blooms is extremely difficult. However, they can certainly have serious ecological, economic and often health consequences depending on the algae species concerned. In the overall balance, the recreation and tourism sectors are seen to suffer noticeably: hotels and restaurants located close to algal blooms are often affected by sudden reduction in guests. Who wants to go on holiday or for a walk on the beach when a thick, evil-smelling algae broth is spilling onto the shore? In addition, there is the cost of the routine checks that are necessary to warn of algal blooms. The algaeâ&#x20AC;&#x2122;s presence in the water makes treatment of drinking water more expensive and many lake-side plots lose their value. In 2014, 500,000 people living in the area around Lake Erie (USA) were affected when drinking water supply had to be