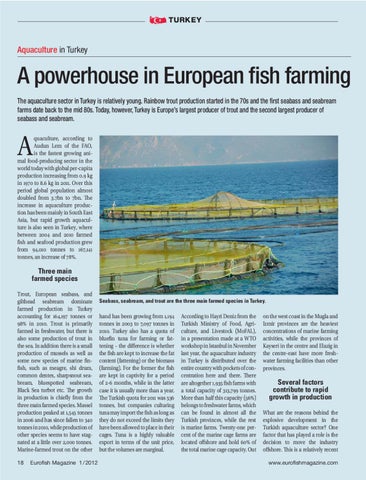 quaculture, according to Audun Lem of the FAO, is the fastest growing animal food-producing sector in the world today with global per-capita production increasing from 0.9 kg in 1970 to 8.6 kg in 2011. Over this period global population almost doubled from 3.7bn to 7bn. The increase in aquaculture production has been mainly in South East Asia, but rapid growth aquaculture is also seen in Turkey, where between 2004 and 2010 farmed fish and seafood production grew from 94,010 tonnes to 167,141 tonnes, an increase of 78.

Three main farmed species Trout, European seabass, and gilthead seabream dominate farmed production in Turkey accounting for 164,197 tonnes or 98 in 2010. Trout is primarily farmed in freshwater, but there is also some production of trout in the sea. In addition there is a small production of mussels as well as some new species of marine finfish, such as meagre, shi drum, common dentex, sharpsnout seabream, bluespotted seabream, Black Sea turbot etc. The growth in production is chiefly from the three main farmed species. Mussel production peaked at 1,545 tonnes in 2006 and has since fallen to 340 tonnes in 2010, while production of other species seems to have stagnated at a little over 2,000 tonnes. Marine-farmed trout on the other 18

Seabass, seabream, and trout are the three main farmed species in Turkey.

hand has been growing from 1,194 tonnes in 2003 to 7,097 tonnes in 2010. Turkey also has a quota of bluefin tuna for farming or fattening – the difference is whether the fish are kept to increase the fat content (fattening) or the biomass (farming). For the former the fish are kept in captivity for a period of 2-6 months, while in the latter case it is usually more than a year. The Turkish quota for 2011 was 536 tonnes, but companies culturing tuna may import the fish as long as they do not exceed the limits they have been allowed to place in their cages. Tuna is a highly valuable export in terms of the unit price, but the volumes are marginal.

According to Hayri Deniz from the Turkish Ministry of Food, Agriculture, and Livestock (MoFAL), in a presentation made at a WTO workshop in Istanbul in November last year, the aquaculture industry in Turkey is distributed over the entire country with pockets of concentration here and there. There are altogether 1,935 fish farms with a total capacity of 313,799 tonnes. More than half this capacity (56) belongs to freshwater farms, which can be found in almost all the Turkish provinces, while the rest is marine farms. Twenty-one percent of the marine cage farms are located offshore and hold 60 of the total marine cage capacity. Out

on the west coast in the Mugla and Izmir provinces are the heaviest concentrations of marine farming activities, while the provinces of Kayseri in the centre and Elazig in the centre-east have more freshwater farming facilities than other provinces.

Several factors contribute to rapid growth in production What are the reasons behind the explosive development in the Turkish aquaculture sector? One factor that has played a role is the decision to move the industry offshore. This is a relatively recent www.eurofishmagazine.com

Celebrating the 10th anniversary of Eurofish this issue covers Turkey and Armenia. The processing section looks at product labelling.

Celebrating the 10th anniversary of Eurofish this issue covers Turkey and Armenia. The processing section looks at product labelling.