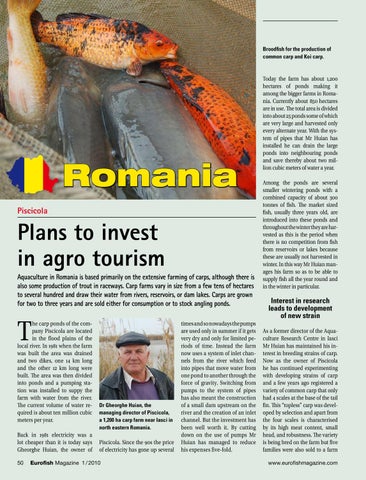 Broodfish for the production of common carp and Koi carp.

Plans to invest in agro tourism

Aquaculture in Romania is based primarily on the extensive farming of carps, although there is also some production of trout in raceways. Carp farms vary in size from a few tens of hectares to several hundred and draw their water from rivers, reservoirs, or dam lakes. Carps are grown for two to three years and are sold either for consumption or to stock angling ponds.

he carp ponds of the company Piscicola are located in the flood plains of the local river. In 1981 when the farm was built the area was drained and two dikes, one 14 km long and the other 12 km long were built. The area was then divided into ponds and a pumping station was installed to suppy the farm with water from the river. The current volume of water required is about ten million cubic meters per year. Back in 1981 electricity was a lot cheaper than it is today says Gheorghe Huian, the owner of

Piscicola. Since the 90s the price of electricity has gone up several

times and so nowadays the pumps are used only in summer if it gets very dry and only for limited periods of time. Instead the farm now uses a system of inlet channels from the river which feed into pipes that move water from one pond to another through the force of gravity. Switching from pumps to the system of pipes has also meant the construction of a small dam upstream on the river and the creation of an inlet channel. But the investment has been well worth it. By cutting down on the use of pumps Mr Huian has managed to reduce his expenses five-fold.

Today the farm has about 1,200 hectares of ponds making it among the bigger farms in Romania. Currently about 850 hectares are in use. The total area is divided into about 25 ponds some of which are very large and harvested only every alternate year. With the system of pipes that Mr Huian has installed he can drain the large ponds into neighbouring ponds and save thereby about two million cubic meters of water a year. Among the ponds are several smaller wintering ponds with a combined capacity of about 300 tonnes of fish. The market sized fish, usually three years old, are introduced into these ponds and throughout the winter they are harvested as this is the period when there is no competition from fish from reservoirs or lakes because these are usually not harvested in winter. In this way Mr Huian manages his farm so as to be able to supply fish all the year round and in the winter in particular.

Interest in research leads to development of new strain As a former director of the Aquaculture Research Centre in Iasci Mr Huian has maintained his interest in breeding strains of carp. Now as the owner of Piscicola he has continued experimenting with developing strains of carp and a few years ago registered a variety of common carp that only had 4 scales at the base of the tail fin. This “topless” carp was developed by selection and apart from the four scales is characterised by its high meat content, small head, and robustness. The variety is being bred on the farm but five families were also sold to a farm www.eurofishmagazine.com