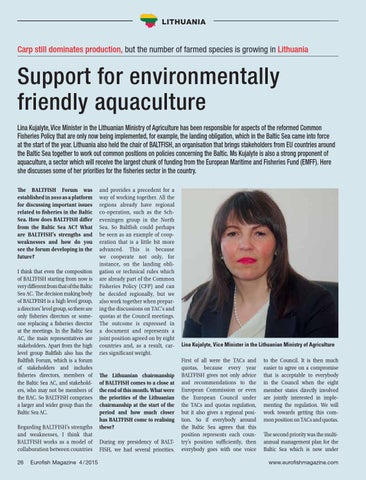 Carp still dominates production, but the number of farmed species is growing in Lithuania

Support for environmentally friendly aquaculture Lina Kujalyte, Vice Minister in the Lithuanian Ministry of Agriculture has been responsible for aspects of the reformed Common Fisheries Policy that are only now being implemented, for example, the landing obligation, which in the Baltic Sea came into force at the start of the year. Lithuania also held the chair of BALTFISH, an organisation that brings stakeholders from EU countries around the Baltic Sea together to work out common positions on policies concerning the Baltic. Ms Kujalyte is also a strong proponent of aquaculture, a sector which will receive the largest chunk of funding from the European Maritime and Fisheries Fund (EMFF). Here she discusses some of her priorities for the ďŹ sheries sector in the country. The BALTFISH Forum was established in 2010 as a platform for discussing important issues related to fisheries in the Baltic Sea. How does BALTFISH differ from the Baltic Sea AC? What are BALTFISHâ&amp;#x20AC;&amp;#x2122;s strengths and weaknesses and how do you see the forum developing in the future? I think that even the composition of BALTFISH starting from now is very different from that of the Baltic Sea AC. The decision making body of BALTFISH is a high level group, a directorsâ&amp;#x20AC;&amp;#x2122; level group, so there are only fisheries directors or someone replacing a fisheries director at the meetings. In the Baltic Sea AC, the main representatives are stakeholders. Apart from the high level group Baltfish also has the Baltfish Forum, which is a forum of stakeholders and includes fisheries directors, members of the Baltic Sea AC, and stakeholders, who may not be members of the RAC. So BALTFISH comprises a larger and wider group than the Baltic Sea AC. Regarding BALTFISHâ&amp;#x20AC;&amp;#x2122;s strengths and weaknesses, I think that BALTFISH works as a model of collaboration between countries 26

and provides a precedent for a way of working together. All the regions already have regional co-operation, such as the Scheveningen group in the North Sea. So Baltfish could perhaps be seen as an example of cooperation that is a little bit more advanced. This is because we cooperate not only, for instance, on the landing obligation or technical rules which are already part of the Common Fisheries Policy (CFP) and can be decided regionally, but we also work together when preparing the discussions on TAC&#39;s and quotas at the Council meetings. The outcome is expressed in a document and represents a joint position agreed on by eight countries and, as a result, carries significant weight.

Lina Kujalyte, Vice Minister in the Lithuanian Ministry of Agriculture

First of all were the TACs and quotas, because every year BALTFISH gives not only advice and recommendations to the European Commission or even the European Council under the TACs and quotas regulation, but it also gives a regional position. So if everybody around the Baltic Sea agrees that this position represents each countryâ&amp;#x20AC;&amp;#x2122;s position sufficiently, then everybody goes with one voice

to the Council. It is then much easier to agree on a compromise that is acceptable to everybody in the Council when the eight member states directly involved are jointly interested in implementing the regulation. We will work towards getting this common position on TACs and quotas. The second priority was the multiannual management plan for the Baltic Sea which is now under www.eurofishmagazine.com

Featuring Lithuania and Finland, this issue reviews the North Atlantic Seafood Forum among other events and includes articles on recreational fishing, sustainability, and the cold chain.