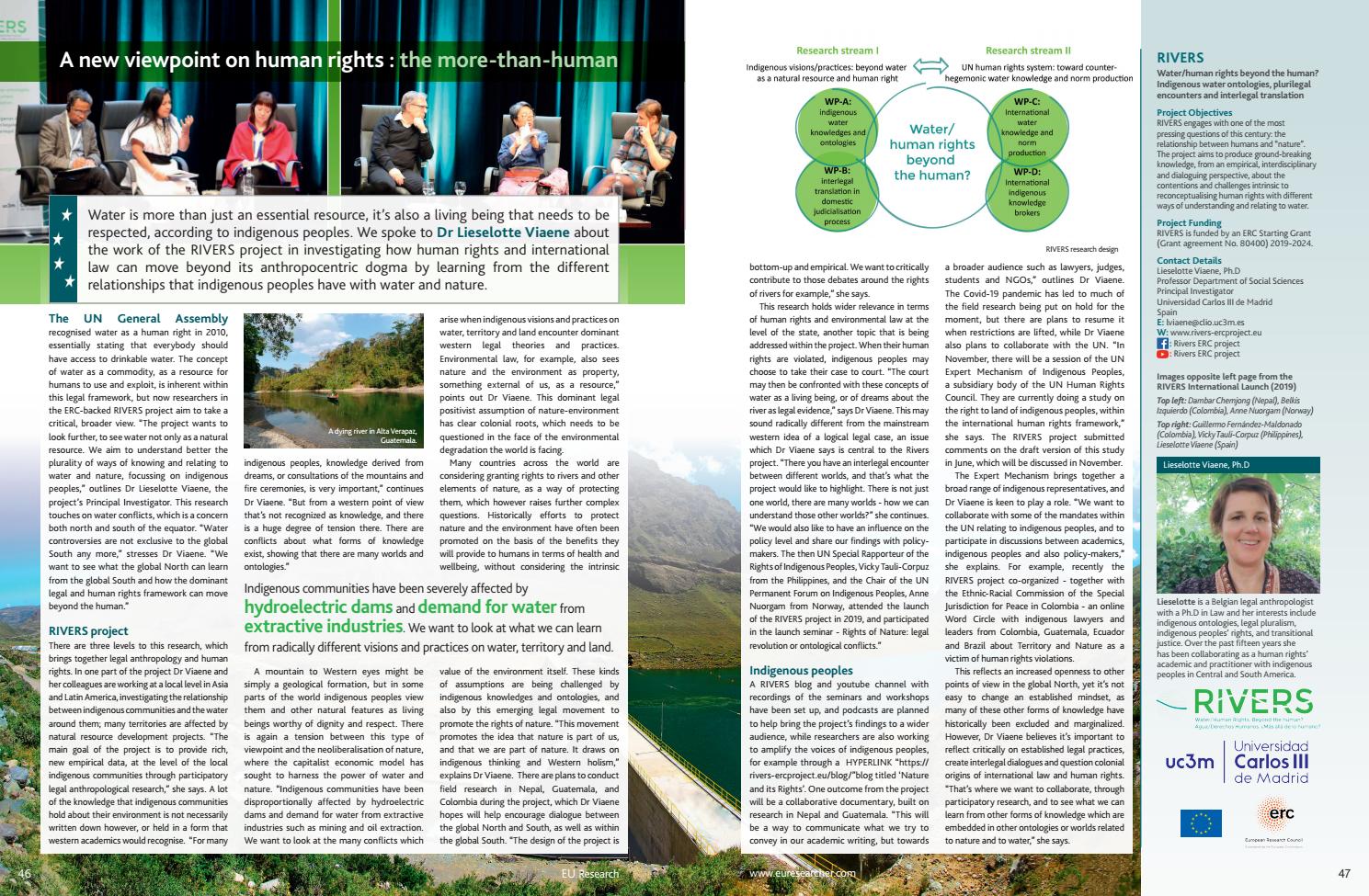 from Blazon Publishing and Media Ltd 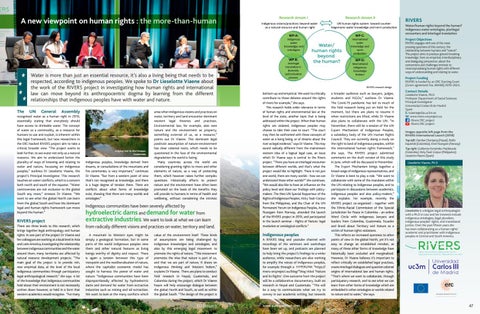 A new viewpoint on human rights : the more-than-human

Water is more than just an essential resource, it’s also a living being that needs to be respected, according to indigenous peoples. We spoke to Dr Lieselotte Viaene about the work of the RIVERS project in investigating how human rights and international law can move beyond its anthropocentric dogma by learning from the different relationships that indigenous peoples have with water and nature. The

recognised water as a human right in 2010, essentially stating that everybody should have access to drinkable water. The concept of water as a commodity, as a resource for humans to use and exploit, is inherent within this legal framework, but now researchers in the ERC-backed RIVERS project aim to take a critical, broader view. “The project wants to look further, to see water not only as a natural resource. We aim to understand better the plurality of ways of knowing and relating to water and nature, focussing on indigenous peoples,” outlines Dr Lieselotte Viaene, the project’s Principal Investigator. This research touches on water conflicts, which is a concern both north and south of the equator. “Water controversies are not exclusive to the global South any more,” stresses Dr Viaene. “We want to see what the global North can learn from the global South and how the dominant legal and human rights framework can move beyond the human.”

RIVERS project There are three levels to this research, which brings together legal anthropology and human rights. In one part of the project Dr Viaene and her colleagues are working at a local level in Asia and Latin America, investigating the relationship between indigenous communities and the water around them; many territories are affected by natural resource development projects. “The main goal of the project is to provide rich, new empirical data, at the level of the local indigenous communities through participatory legal anthropological research,” she says. A lot of the knowledge that indigenous communities hold about their environment is not necessarily written down however, or held in a form that western academics would recognise. “For many

indigenous peoples, knowledge derived from dreams, or consultations of the mountains and fire ceremonies, is very important,” continues Dr Viaene. “But from a western point of view that’s not recognized as knowledge, and there is a huge degree of tension there. There are conflicts about what forms of knowledge exist, showing that there are many worlds and ontologies.”

arise when indigenous visions and practices on water, territory and land encounter dominant western legal theories and practices. Environmental law, for example, also sees nature and the environment as property, something external of us, as a resource,” points out Dr Viaene. This dominant legal positivist assumption of nature-environment has clear colonial roots, which needs to be questioned in the face of the environmental degradation the world is facing. Many countries across the world are considering granting rights to rivers and other elements of nature, as a way of protecting them, which however raises further complex questions. Historically efforts to protect nature and the environment have often been promoted on the basis of the benefits they will provide to humans in terms of health and wellbeing, without considering the intrinsic

RIVERS engages with one of the most pressing questions of this century: the relationship between humans and “nature”. The project aims to produce ground-breaking knowledge, from an empirical, interdisciplinary and dialoguing perspective, about the contentions and challenges intrinsic to reconceptualising human rights with different ways of understanding and relating to water.

bottom-up and empirical. We want to critically contribute to those debates around the rights of rivers for example,” she says. This research holds wider relevance in terms of human rights and environmental law at the level of the state, another topic that is being addressed within the project. When their human rights are violated, indigenous peoples may choose to take their case to court. “The court may then be confronted with these concepts of water as a living being, or of dreams about the river as legal evidence,” says Dr Viaene. This may sound radically different from the mainstream western idea of a logical legal case, an issue which Dr Viaene says is central to the Rivers project. “There you have an interlegal encounter between different worlds, and that’s what the project would like to highlight. There is not just one world, there are many worlds - how we can understand those other worlds?” she continues. “We would also like to have an influence on the policy level and share our findings with policymakers. The then UN Special Rapporteur of the Rights of Indigenous Peoples, Vicky Tauli-Corpuz from the Philippines, and the Chair of the UN Permanent Forum on Indigenous Peoples, Anne Nuorgam from Norway, attended the launch of the RIVERS project in 2019, and participated in the launch seminar - Rights of Nature: legal revolution or ontological conflicts.”

value of the environment itself. These kinds of assumptions are being challenged by indigenous knowledges and ontologies, and also by this emerging legal movement to promote the rights of nature. “This movement promotes the idea that nature is part of us, and that we are part of nature. It draws on indigenous thinking and Western holism,” explains Dr Viaene. There are plans to conduct field research in Nepal, Guatemala, and Colombia during the project, which Dr Viaene hopes will help encourage dialogue between the global North and South, as well as within the global South. “The design of the project is

A RIVERS blog and youtube channel with recordings of the seminars and workshops have been set up, and podcasts are planned to help bring the project’s findings to a wider audience, while researchers are also working to amplify the voices of indigenous peoples, for example through a HYPERLINK “https:// rivers-ercproject.eu/blog/”blog titled ‘Nature and its Rights’. One outcome from the project will be a collaborative documentary, built on research in Nepal and Guatemala. “This will be a way to communicate what we try to convey in our academic writing, but towards

a broader audience such as lawyers, judges, students and NGOs,” outlines Dr Viaene. The Covid-19 pandemic has led to much of the field research being put on hold for the moment, but there are plans to resume it when restrictions are lifted, while Dr Viaene also plans to collaborate with the UN. “In November, there will be a session of the UN Expert Mechanism of Indigenous Peoples, a subsidiary body of the UN Human Rights Council. They are currently doing a study on the right to land of indigenous peoples, within the international human rights framework,” she says. The RIVERS project submitted comments on the draft version of this study in June, which will be discussed in November. The Expert Mechanism brings together a broad range of indigenous representatives, and Dr Viaene is keen to play a role. “We want to collaborate with some of the mandates within the UN relating to indigenous peoples, and to participate in discussions between academics, indigenous peoples and also policy-makers,” she explains. For example, recently the RIVERS project co-organized - together with the Ethnic-Racial Commission of the Special Jurisdiction for Peace in Colombia - an online Word Circle with indigenous lawyers and leaders from Colombia, Guatemala, Ecuador and Brazil about Territory and Nature as a victim of human rights violations. This reflects an increased openness to other points of view in the global North, yet it’s not easy to change an established mindset, as many of these other forms of knowledge have historically been excluded and marginalized. However, Dr Viaene believes it’s important to reflect critically on established legal practices, create interlegal dialogues and question colonial origins of international law and human rights. “That’s where we want to collaborate, through participatory research, and to see what we can learn from other forms of knowledge which are embedded in other ontologies or worlds related to nature and to water,” she says.

Lieselotte is a Belgian legal anthropologist with a Ph.D in Law and her interests include indigenous ontologies, legal pluralism, indigenous peoples’ rights, and transitional justice. Over the past fifteen years she has been collaborating as a human rights’ academic and practitioner with indigenous peoples in Central and South America.

We spoke to Dr Lieselotte Viaene about the work of the RIVERS project in investigating how human rights and international law can move beyond its anthropocentric dogma by learning from the relationships that indigenous peoples have with water and nature.