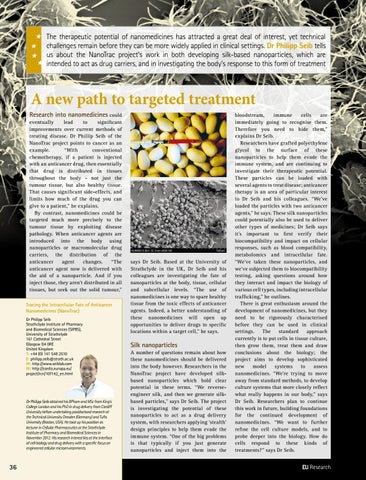 The therapeutic potential of nanomedicines has attracted a great deal of interest, yet technical challenges remain before they can be more widely applied in clinical settings. Dr Philipp Seib tells us about the NanoTrac project’s work in both developing silk-based nanoparticles, which are intended to act as drug carriers, and in investigating the body’s response to this form of treatment

A new path to targeted treatment Research into nanomedicines could eventually lead to significant improvements over current methods of treating disease. Dr Phillip Seib of the NanoTrac project points to cancer as an example. “With conventional chemotherapy, if a patient is injected with an anticancer drug, then essentially that drug is distributed in tissues throughout the body - not just the tumour tissue, but also healthy tissue. That causes significant side-effects, and limits how much of the drug you can give to a patient,” he explains. By contrast, nanomedicines could be targeted much more precisely to the tumour tissue by exploiting disease pathology. When anticancer agents are introduced into the body using nanoparticles or macromolecular drug carriers, the distribution of the anticancer agent changes. “The anticancer agent now is delivered with the aid of a nanoparticle. And if you inject those, they aren’t distributed in all tissues, but seek out the solid tumour,” Tracing the Intracellular Fate of Anticancer Nanomedicines (NanoTrac) Dr Philipp Seib Strathclyde Institute of Pharmacy and Biomedical Sciences (SIPBS), University of Strathclyde 161 Cathedral Street Glasgow G4 0RE United Kingdom T: +44 (0) 141 548 2510 E: philipp.seib@strath.ac.uk W: http://www.seiblab.com W: http://cordis.europa.eu/ project/rcn/107142_en.html

Dr Philipp Seib obtained his BPham and MSc from King’s College London and his PhD in drug delivery from Cardiff University before undertaking postdoctoral research at the Technical University Dresden (Germany) and Tufts University (Boston, USA). He took up his position as lecturer in Cellular Pharmaceutics at the Strathclyde Institute of Pharmacy and Biomedical Sciences in November 2012. His research interest lies at the interface of cell biology and drug delivery with a specific focus on engineered cellular microenvironments.

says Dr Seib. Based at the University of Strathclyde in the UK, Dr Seib and his colleagues are investigating the fate of nanoparticles at the body, tissue, cellular and subcellular levels. “The use of nanomedicines is one way to spare healthy tissue from the toxic effects of anticancer agents. Indeed, a better understanding of these nanomedicines will open up opportunities to deliver drugs to specific locations within a target cell,” he says.

Silk nanoparticles A number of questions remain about how these nanomedicines should be delivered into the body however. Researchers in the NanoTrac project have developed silkbased nanoparticles which hold clear potential in these terms. “We reverseengineer silk, and then we generate silkbased particles,” says Dr Seib. The project is investigating the potential of these nanoparticles to act as a drug delivery system, with researchers applying ‘stealth’ design principles to help them evade the immune system. “One of the big problems is that typically if you just generate nanoparticles and inject them into the

bloodstream, immune cells are immediately going to recognise them. Therefore you need to hide them,” explains Dr Seib. Researchers have grafted polyethylene glycol to the surface of these nanoparticles to help them evade the immune system, and are continuing to investigate their therapeutic potential. These particles can be loaded with several agents to treat disease; anticancer therapy is an area of particular interest to Dr Seib and his colleagues. “We’ve loaded the particles with two anticancer agents,” he says. These silk nanoparticles could potentially also be used to deliver other types of medicines; Dr Seib says it’s important to first verify their biocompatibility and impact on cellular responses, such as blood compatibility, metabolomics and intracellular fate. “We’ve taken these nanoparticles, and we’ve subjected them to biocompatibility testing, asking questions around how they interact and impact the biology of various cell types, including intracellular trafficking,” he outlines. There is great enthusiasm around the development of nanomedicines, but they need to be rigorously characterised before they can be used in clinical settings. The standard approach currently is to put cells in tissue culture, then grow them, treat them and draw conclusions about the biology; the project aims to develop sophisticated new model systems to assess nanomedicines. “We’re trying to move away from standard methods, to develop culture systems that more closely reflect what really happens in our body,” says Dr Seib. Researchers plan to continue this work in future, building foundations for the continued development of nanomedicines. “We want to further refine the cell culture models, and to probe deeper into the biology. How do cells respond to these kinds of treatments?” says Dr Seib.

With a key feature examining the implications of the BREXIT vote and it's effect on European research. This issue highlights the latest research under Horizon 2020 with particular emphasis on Solid State Physics, Plasma Materials and Health