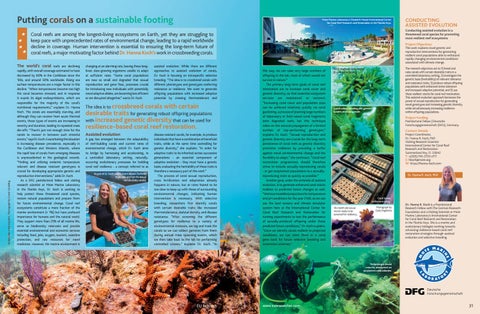 Putting corals on a sustainable footing

Coral reefs are among the longest-living ecosystems on Earth, yet they are struggling to keep pace with unprecedented rates of environmental change, leading to a rapid worldwide decline in coverage. Human intervention is essential to ensuring the long-term future of coral reefs, a major motivating factor behind Dr. Hanna Koch’s work in crossbreeding corals. The world’s coral reefs are declining rapidly, with overall coverage estimated to have decreased by 80% in the Caribbean since the ‘80s, and around 50% worldwide. Rising sea surface temperatures are a major factor in this decline. “When temperatures become too high the coral becomes stressed, and in response it expels its algal endosymbionts, which are responsible for the majority of the coral’s nutritional requirements,” explains Dr. Hanna Koch. The corals are essentially starving, and although they can recover from acute thermal events, these types of events are increasing in severity and duration, leading to repeated mass die-offs. “There’s just not enough time for the corals to recover in between such stressful events,” says Dr. Koch. Exacerbating the situation is increasing disease prevalence, especially in the Caribbean and Western Atlantic, where the rapid loss of corals from emerging diseases is unprecedented in the geological records. “Finding and utilizing endemic temperature tolerant and disease resistant genotypes is crucial for developing appropriate genetic and reproductive interventions,” adds Dr. Koch. As a DFG postdoctoral fellow and visiting research scientist at Mote Marine Laboratory in the Florida Keys, Dr. Koch is working to help protect these threatened coral species, restore natural populations and prepare them for future environmental change. Coral reef ecosystems constitute a mere fraction of the marine environment (&lt; 1%) but have profound importance for humans and the natural world. They support more than 25% of all marine life, serve as biodiversity reservoirs and provide essential environmental and economic services including food, jobs, oxygen, tourism, coastline protection, and raw resources for novel medicines. However, the marine environment is

changing at an alarming rate, leaving these longlived, slow-growing organisms unable to adapt at sufficient rates. “Some coral populations are now so small and degraded that sexual reproduction and gene flow, processes crucial for introducing new individuals with potentially novel adaptive alleles, are becoming less efficient or are disrupted altogether,” warns Dr. Koch.

assisted evolution. While there are different approaches to assisted evolution of corals, Dr. Koch is focusing on intraspecific selective breeding. “The idea is to crossbreed corals with different phenotypes and genotypes conferring resistance or resilience. We want to generate offspring populations with increased adaptive potential by crossing thermotolerant and

resilience-based coral reef restoration. Assisted evolution A gap has emerged between the adaptability of reef-building corals and current rates of environmental change, which Dr. Koch aims to bridge by harnessing and accelerating, in a controlled laboratory setting, naturallyoccurring evolutionary processes for building coral reef resilience - a concept referred to as As part of Dr. Koch’s team, intern Allyson DeMerlis helps raise and test the sexual recruits (baby corals).

disease resistant corals, for example, to produce individuals that have a combination of beneficial traits, while at the same time controlling for genetic diversity,” she explains. “In order for adaptive traits to be inherited across successive generations - an essential component of adaptive evolution - they must have a genetic basis; evaluating the heritability of these traits is therefore a necessary part of this work.” The process of coral sexual reproduction, cross fertilization and adaptation already happens in nature, but at rates feared to be too slow to keep up with those of surrounding environmental changes, indicating human intervention is necessary. With selective breeding, researchers first identify corals with certain desirable traits like increased thermotolerance, skeletal density, and disease resistance. “After screening the different genotypes for resilience to a variety of environmental stressors, we tag and track the corals so we can collect gametes from them during annual mass spawning events, which we then take back to the lab for performing controlled crosses,” explains Dr. Koch. “In

this way, we can raise very large numbers of offspring in the lab, most of which would not survive in nature.” The primary long-term goals of coral reef restoration are to increase coral cover and genetic diversity, so that essential ecosystem services are maintained or restored. “Increasing coral cover and population sizes can be achieved relatively quickly via coral gardening, a process of planting large numbers of laboratory or field-raised coral fragments onto degraded reefs, but this technique relies on the asexual propagation of a limited number of top-performing genotypes,” explains Dr. Koch. “Sexual reproduction and genetic diversity are crucial for the long-term persistence of coral reefs as genetic diversity promotes resilience by providing a buffer against novel environmental change and the flexibility to adapt,” she continues. “Coral reef restoration programmes should therefore strive to include sexually-reproducing corals - or get outplanted populations to a sexuallyreproducing state as quickly as possible.” Another goal, under the umbrella of assisted evolution, is to generate enhanced coral stocks resilient to predicted future changes as well. “We have modelled projections for temperature and pH conditions for the year 2100, so we can use the land nursery and climate simulator system here at the International Center for Coral Reef Research and Restoration for running experiments to test the performance of sexually-produced offspring under those predicted future conditions,” Dr. Koch explains. “Once we identify corals resilient to projected conditions, we can store them in a coral gene bank for future selective breeding and restoration schemes.”

The research objectives are to 1) breed and raise corals with certain desirable traits in a controlled laboratory setting, 2) investigate the genetic basis (heritability) of relevant tolerance and resistance traits, 3) produce robust offspring populations with enhanced stress tolerance and increased adaptive potential, and 5) use these resilient stocks for coral reef restoration. This assisted evolution approach harnesses the power of sexual reproduction for generating novel genotypes and increasing genetic diversity while simultaneously increasing resilience within offspring populations.

Dr. Hanna R. Koch is a Postdoctoral Research Fellow with The German Research Foundation and a Visiting Scientist at Mote Marine Laboratory’s International Center for Coral Reef Research and Restoration in the Florida Keys. She is a marine and evolutionary biologist working towards advancing resilience-based coral reef restoration strategies through assisted evolution and selective breeding.

Coral reefs are among the longest- living ecosystems on Earth, yet they are struggling to keep pace with unprecedented rates of environmental change. Human intervention is essential to ensuring the long-term future of coral reefs, argues Dr. Hanna Koch