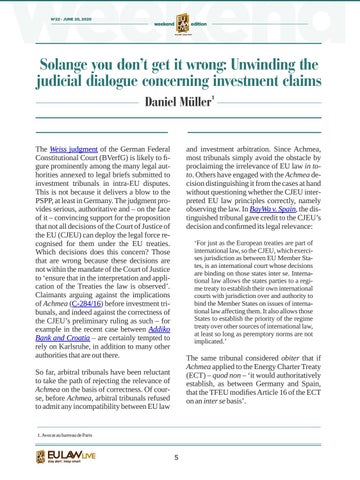 The Weiss judgment of the German Federal Constitutional Court (BVerfG) is likely to gure prominently among the many legal authorities annexed to legal briefs submitted to investment tribunals in intra-EU disputes. This is not because it delivers a blow to the PSPP, at least in Germany. The judgment provides serious, authoritative and – on the face of it – convincing support for the proposition that not all decisions of the Court of Justice of the EU (CJEU) can deploy the legal force recognised for them under the EU treaties. Which decisions does this concern? Those that are wrong because these decisions are not within the mandate of the Court of Justice to ‘ensure that in the interpretation and application of the Treaties the law is observed’. Claimants arguing against the implications of Achmea (C-284/16) before investment tribunals, and indeed against the correctness of the CJEU’s preliminary ruling as such – for example in the recent case between Addiko Bank and Croatia – are certainly tempted to rely on Karlsruhe, in addition to many other authorities that are out there.

and investment arbitration. Since Achmea, most tribunals simply avoid the obstacle by proclaiming the irrelevance of EU law in toto. Others have engaged with the Achmea decision distinguishing it from the cases at hand without questioning whether the CJEU interpreted EU law principles correctly, namely observing the law. In BayWa v. Spain, the distinguished tribunal gave credit to the CJEU’s decision and conrmed its legal relevance: ‘For just as the European treaties are part of international law, so the CJEU, which exercises jurisdiction as between EU Member States, is an international court whose decisions are binding on those states inter se. International law allows the states parties to a regime treaty to establish their own international courts with jurisdiction over and authority to bind the Member States on issues of international law affecting them. It also allows those States to establish the priority of the regime treaty over other sources of international law, at least so long as peremptory norms are not implicated.’

The same tribunal considered obiter that if Achmea applied to the Energy Charter Treaty (ECT) – quod non – ‘it would authoritatively establish, as between Germany and Spain, that the TFEU modies Article 16 of the ECT on an inter se basis’.