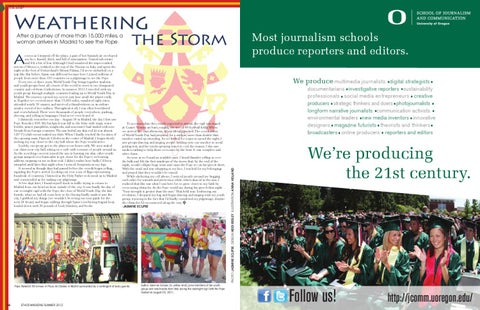 Weathering After a journey of more than 15,000 miles, a woman arrives in Madrid to see the Pope.

To accommodate the crowds expected to attend, the vigil was staged at Cuatro Vientos air base, roughly the size of 48 football fields. When we arrived late that afternoon, it was already packed. The coordinators of World Youth Day had prepared for a million; more than double that number ended up attending. As we looked for a spot to spend the night, I saw groups dancing and singing, people holding onto one another to avoid getting lost, and fire trucks spraying water to cool the masses. I also saw medics rushing to help those overcome by the heat. It was complete and utter chaos. As soon as we found an available spot, I heard thunder rolling in over the hills and felt the first raindrops of the storm that, by the end of the night, would collapse huge tents and cause the Pope to cut his speech short. With the wind and rain whipping at my face, I reached for my belongings and prayed that they wouldn’t be ruined. While sheltering my cell phone, I noticed people around me hugging each other for warmth and protection while others danced in the rain. I realized that this was what I was here for: to grow closer to my faith by overcoming obstacles. As the Pope would say during his speech that night: “Your strength is greater than the rain.” That held true. Embracing my revelation, I dropped my bag and began dancing and singing with my youth group, rejoicing in the fact that I’d finally completed my pilgrimage, despite the obstacles I’d encountered along the way. -JASMINE ECLIPSE

Author Jasmine Eclipse (in yellow shirt) joins members of her youth group and new friends from Italy during the overnight vigil with the Pope hosted on August 20, 2011.

s soon as I stepped off the plane, a gust of hot Spanish air enveloped my face, humid, thick, and full of anticipation. I tasted adventure and felt a bit of fear. Although I had wandered the impoverished streets of Morocco, trekked to the top of the Duomo in Italy, and spent the night at the foot of Switzerland’s Mount Pilatus, I’d never embarked on a trip like this before. Spain was different because here I joined millions of people from more than 130 countries on a pilgrimage to see the Pope. Every two or three years, World Youth Day brings together students and youth groups from all corners of the world to meet in one designated country and celebrate Catholicism. In summer 2011, I traveled with my youth group through multiple countries leading up to World Youth Day in Madrid. The journey opened my eyes to just how small the planet really is. Together we covered more than 15,000 miles, wandered eight cities, attended nearly 30 masses, and survived a thunderstorm on an airbase amid a crowd of two million. Throughout it all, I was often bewildered and overwhelmed. There were thousands of people everywhere, pushing, shoving, and yelling in languages I had never even heard of. I distinctly remember one day—August 18 in Madrid, the day I first saw Pope Benedict XVI. My backpack was full to the brim with maps, water bottles, prayer pamphlets, songbooks, and souvenirs I had traded with new friends from foreign countries. The sun boiled my skin red (it was almost 120° F) while sweat soaked my shirt. When I finally reached the location of the opening mass, Plaza de Cibeles in the center of Madrid, I began slowly inching my way closer to the city hall where the Pope would arrive. Luckily, our group got to the plaza seven hours early. We soon staked our claim near city hall, sitting on a curb with a swarm of people around us. As the scorching concrete joined the sun in burning my skin, other youth groups jumped over barricades to get closer for the Pope’s welcoming address, stepping on me in their zeal. I didn’t realize how badly I’d been trampled until later that night when I noticed footprints on my legs. It seemed as though days had passed before the crowds began yelling, signaling the Pope’s arrival. Looking out over a sea of flags representing hundreds of countries, I listened as the Holy Father welcomed us to Madrid and commended us for making our pilgrimage. A few days later, I found myself stuck in traffic trying to return to Madrid from our hotel an hour outside of the city. It was finally the day of our overnight vigil with the Pope, the close of World Youth Day, the last hurrah, what we had all come here to do. Having finally made it into the city, I grabbed my things (we wouldn’t be seeing our tour guide for the next 24 hours) and began walking through Spain’s sweltering August heat, loaded down with 30 pounds of food, blankets, and books. 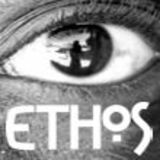