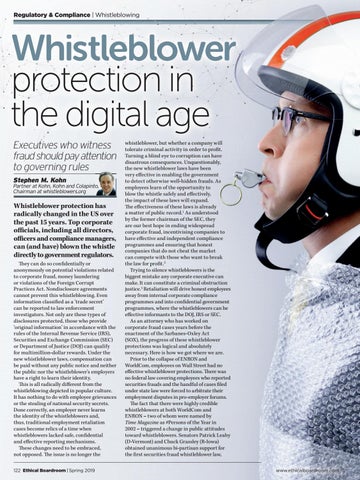 Partner at Kohn, Kohn and Colapinto, Chairman at whistleblowers.org

Whistleblower protection has radically changed in the US over the past 15 years. Top corporate officials, including all directors, officers and compliance managers, can (and have) blown the whistle directly to government regulators. They can do so confidentially or anonymously on potential violations related to corporate fraud, money laundering or violations of the Foreign Corrupt Practices Act. Nondisclosure agreements cannot prevent this whistleblowing. Even information classified as a ‘trade secret’ can be reported to law enforcement investigators. Not only are these types of disclosures protected, those who provide ‘original information’ in accordance with the rules of the Internal Revenue Service (IRS), Securities and Exchange Commission (SEC) or Department of Justice (DOJ) can qualify for multimillion-dollar rewards. Under the new whistleblower laws, compensation can be paid without any public notice and neither the public nor the whistleblower’s employers have a right to learn their identity. This is all radically different from the whistleblowing depicted in popular culture. It has nothing to do with employee grievances or the stealing of national security secrets. Done correctly, an employer never learns the identity of the whistleblowers and, thus, traditional employment retaliation cases become relics of a time when whistleblowers lacked safe, confidential and effective reporting mechanisms. These changes need to be embraced, not opposed. The issue is no longer the 122 Ethical Boardroom | Spring 2019

whistleblower, but whether a company will tolerate criminal activity in order to profit. Turning a blind eye to corruption can have disastrous consequences. Unquestionably, the new whistleblower laws have been very effective in enabling the government to detect otherwise well-hidden frauds. As employees learn of the opportunity to blow the whistle safely and effectively, the impact of these laws will expand. The effectiveness of these laws is already a matter of public record.1 As understood by the former chairman of the SEC, they are our best hope in ending widespread corporate fraud, incentivising companies to have effective and independent compliance programmes and ensuring that honest companies that do not cheat the market can compete with those who want to break the law for profit.2 Trying to silence whistleblowers is the biggest mistake any corporate executive can make. It can constitute a criminal obstruction justice.3 Retaliation will drive honest employees away from internal corporate compliance programmes and into confidential government programmes, where the whistleblowers can be effective informants to the DOJ, IRS or SEC. As an attorney who has worked on corporate fraud cases years before the enactment of the Sarbanes-Oxley Act (SOX), the progress of these whistleblower protections was logical and absolutely necessary. Here is how we got where we are. Prior to the collapse of ENRON and WorldCom, employees on Wall Street had no effective whistleblower protections. There was no federal law covering employees who reported securities frauds and the handful of cases filed under state law were forced to arbitrate their employment disputes in pro-employer forums. The fact that there were highly credible whistleblowers at both WorldCom and ENRON – two of whom were named by Time Magazine as #Persons of the Year in 2002 – triggered a change in public attitudes toward whistleblowers. Senators Patrick Leahy (D-Vermont) and Chuck Grassley (R-Iowa) obtained unanimous bi-partisan support for the first securities fraud whistleblower law, www.ethicalboardroom.com 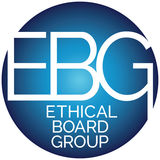