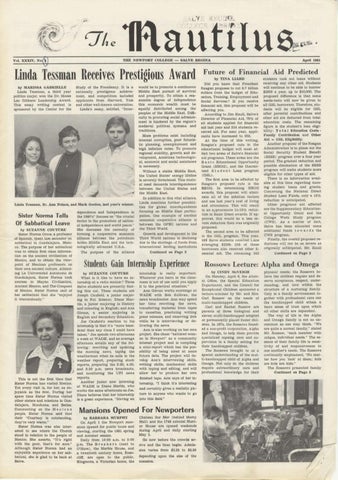 Study of the Presidency. It is a nationally prestigious achieve· ment, and competition included applicants from Harvard, Yale and other well-known universities. Linda&#39;s essay, entitled, &quot;Inter-

This is not the first time that Sister Norma has visited Mexico. Yet every visit is, for her, as enjoyable as the first. During her spare time Sister Norma visited other sisters and missions in Guadalajara, Honduras, and Belise. Commenting on the M e x i c a n people, Sister Norma said that their &quot;Courtesy is outstanding, they&#39;re very warm.&quot; Sister Norma was also interested to see where the Church stood in relation to the people of Mexico. She asserts, &quot;It&#39;s right with the poor, that&#39;s for sure.&quot; Although Sister Norma had an enjoyable experience on her sabbatical, she is glad to be back at Salve.

dependence and Independence in the 1980&#39;s&quot; focuses on &quot;the crucial factor in the promotion of national independence and world peace.&quot; She discusses the necessity of forming a cooperative economic alliance between the petroleum laiden Middle East and the tech· nologically advanced U.S.A. The purpose of the alliance

would be to promote a continuous Middle East pursuit of survival and prosperity. To attain a reasonable degree of independence this economic wealth must be equally distributed among the· peoples of the Middle East. Difficulty in procuring social advancement is hindered by the region&#39;s medieval political systems and traditions. More problems exist including internal corruption, poor futuristic planning, unemployment and high inflation rates. To promote regional stability, gl&#39;owth and development, American technological, economic and social assistance is necessary. Without a stable Middle East, the United States&#39; energy lifeline is severely threatened. This mutual need demands interdependence between the United States and the Middle East. In addition to this vital alliance, Linda mentions further possibili· ties for global interdependence focusing on Middle East participation. One example of another economic cooperative alliance is between the OPEC nations and the Third World. Growth and development in the Third World nations is declining due to the shortage of funds from international lending institutions Continued on Page 3

Students Gain Internship Experience by SUZANNE COUTURE What is it like tu have an internship at a radio station? Three Salve students are presently finding this out. These students are Joseph Caufield, a junior majoring in Pol. Science; Diane Martin, a junior majoring in History and minoring in English; and Ann Giroux, a senior majoring in English and Secondary Education. Joe Caufield&#39;s reaction to his internship is that it&#39;s &quot;more beneficial than any class I could have taken.&quot; Joe spends two afternoons a week at WADK, and an average afternoon entails any of the following: rewriting and updating the morning news, tapihg the weatherman when he calls in the weather report, preparing stock reports, preparing the 3:30, 4:30, and 5:30 p.m. news broadcasts, and monitoring the UPI news reports. Another junior now interning at WADK is Diane Martin, who works the same afternoons as Joe. Diane believes that her internship is a great experience. &quot;Having an

internship is really important. Whatever you learn in the classroom is not of use until you apply it to the practical situation.&quot; Ann Giroux works mornings at WADK with Bob. Sullivan, the news broadcaster. Ann may spend her time rewriting the news, transferring material from tapes to cassettes, practicing writing press releases, and observing Bob while he is interviewing or delivering the news. Ann is also working on her own project. She chose &quot;battered women in Newport&quot; as a community interest project and is compiling a mini-report which has the possibility of being aired at some future date. The project will develop Ann&#39;s interviewing skills, writing skills, mechanical skills with taping and editing, and will allow her to produce her own finished tape. Ann says of her internship, &quot;I think it&#39;s interesting and certainly gives a realistic picture to anyone who wants to go into this field.&quot;

Mansions Opened For Newporters by BARBARA MURPHY On April 1 the Newport mansions opened for public tours and viewing, starting the 1981 spring and summer season. Daily from 10:00 a.m. to 5:00 p.m. The Breakers (next to O&#39;Hare), the Marble House, and a twentieth century home, Rosecliff, are open to the public. Kingscote, a Victorian home, the

Chateau Sur Mer (behind Mercy Hall) and the 1748 colonial Hunter House are opened weekends during April and daily starting May 1. Go now before the crowds arrive and the lines begin. Admission varies from $2.25 to $3.50 depending upon the size of the mansion.

Future of Financial Aid Predicted by TINA LIARD Did you know that President Reagan proposes to cut 8.7 billion dollars from the budget of Education, Training, Employment and Social Services? If you receive financial aid, this proposal will be affecting you. According to Jim Kaull, Salve&#39;s Director of Financial Aid, 79 % of all students applied for financial aid last year and 516 students received aid. For next year, applicants have increased to 953. At the time of this writing, Reagan&#39;s proposed cuts in the educational budget will most affect two areas of Salve&#39;s financial aid programs. These areas are the B as i c Educational Opportunity Grant (BEOG), and the Guaranteed S t u d e n t Loan program (GSL). The first area to be affected by Reagan&#39;s proposed cuts is the BEOG. In determining BEOG awards, this proposal will eliminate all of the inflation factors and use last year&#39;s cost of living and attendance. This will l&#39;esult in an a;:&gt;proxinrnte lU-15 % reduction in Basic Grant awards. If approved, this would be a less severe reduction than was originally proposed. The second area to be affected is the GSL program. This year, 669 Salve students received Ivans averaging $2300. 316- of these borrowers also received other financial aid. The remaining 343

students took out loans without receiving any other aid. Students will continue to be able to borrow $2500 a year, up to $10,000. The proposed difference is that some needs-tests will now be given to all GSL borrowers. Therefore, students will be eligible for GSL after parental contributions and other aid are deducted from total education costs. The remaining figure is the student&#39;s loan eligibility: Tot al Education Costs Family Contribution and Other Aid = GSL Eligibility. Another proposal of the Reagan Administration is to phase out the Social Security Student Benefit (SSSB) program over a four year period. The gradual reduction and possible elimination of the SSSB program will make i,tudents more eligible for other types of aid. There is no information available at this time regarding nursing student loans and grants. Concerning the National Direct Student Loan Funds, only a 15% reduction is anticipated. Other programs not affected are the Supplementary Educational Opportunity Grant and the College Work Study progrnm (CWS). As a matter of fact, Salve has been allocated some additional funds towards the CWS program. Finally, the overall proposed reductions will not be as severe as originally anticipated. Mr. Kaull Continued on Page S

physical needs; the Rossows believe the children require and deserve acceptance, respect, understanding, and love within the structure of a nurturing family . Only in a family environment together with professional care can the handicapped child attain a basic sense of trust upon which all other skills are dependent. The way of life in the Alpha and Omega family is not as uncommon as one may think. &quot;We are quite a normal family,&quot; stated Mr. Rossow, &quot;each member with unique, individual needs.&quot; The essence of their family life is sensitivity of and responsiveness to one another&#39;s needs. The Rossows continually emphasized, &quot;No matter how you &#39;look&#39; at them; kids are kids are kids.&quot; The Rossows presented family Continued on Page S