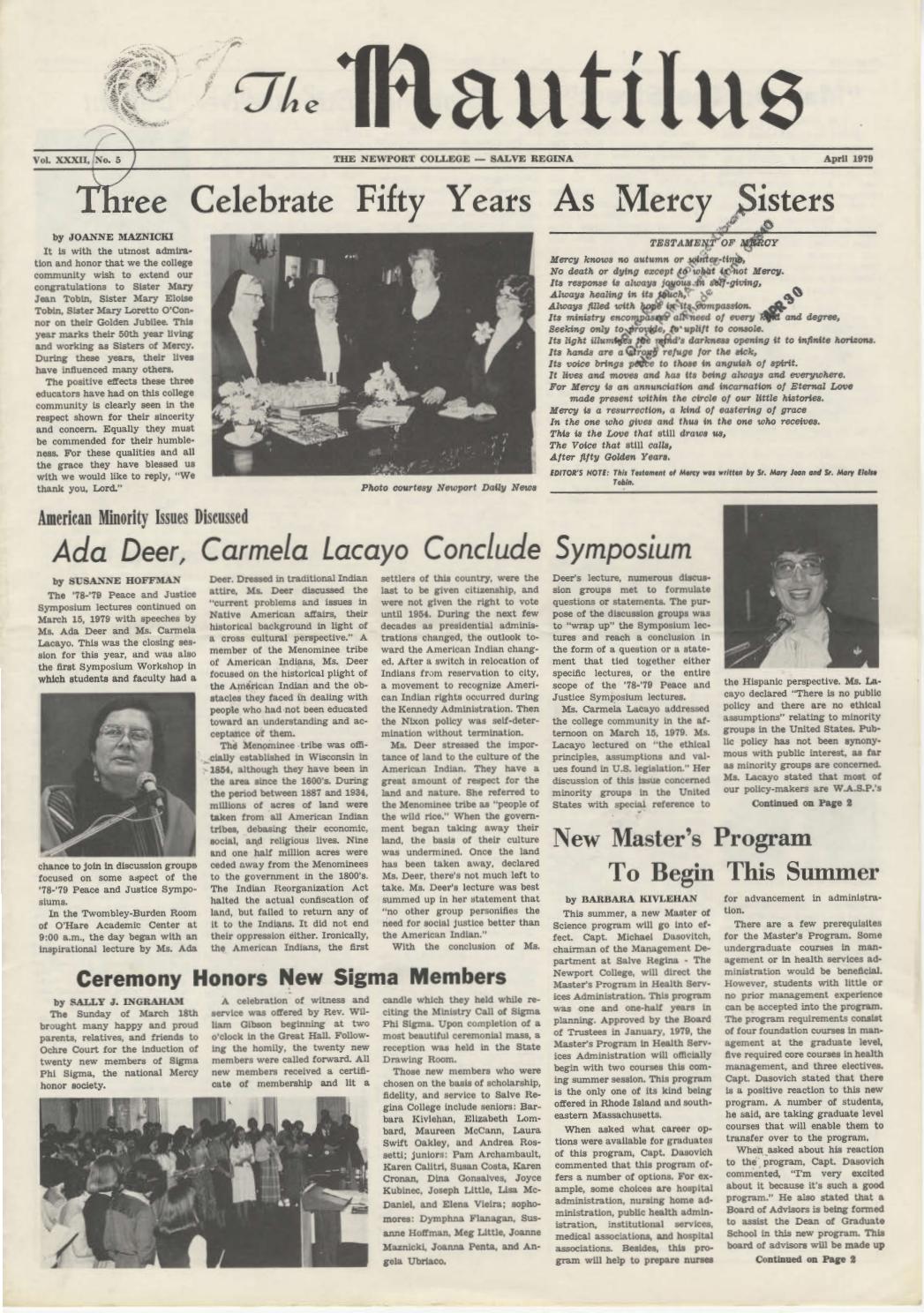 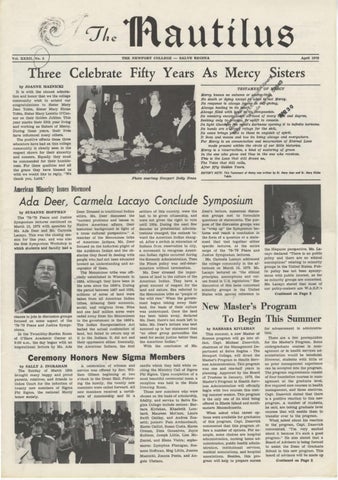 Celebrate Fifty Years As Mercy by JOANNE MAZNICKI It is with the utmost admiration and honor that we the college community wish to extend our congratulations to Sister Mary Jean Tobin, Sister Mary Eloise Tobin, Sister Mary Loretto O&#39;Connor on their Golden Jubilee. This year marks their 50th year living and working as Sisters of Mercy. During these years, their lives have influenced many others. The positive effects these three educators have had on this college community is clearly seen in the respect shown for their sincerity and concern. Equally they must be commended for their humbleness. For these qualities and all the grace they have blessed us with we would like to reply, &quot;We thank you, Lord.&quot;

Mercy knows no autumn or ~;a~t-ti~ No death or dying except (.§&gt;~1).__t,,t 4-..~ot Mercy. Its response is always j~ous ,&#39;ffi s&quot;tflt-giving, Always healing in its Ji&#39;uC.h;&lt;&#39; &#39;?,~ Always filled with 1.wp&quot;lf i~·&#39;it\..._W mpassion. _cQ. , Its ministry enco7JJ?ifs~&#39;i&#39; azfJ;&#39;need of every . - and degree, Seeking only to:,:provt)e, f:o&#39;uplift to console. Its light illumff,fJs r#id&#39;s darkness opening it to infinite horizons. Its hands are a (airo~ refuge for the sick, Its voice brings p~e to those in anguish of spirit. It lives and moves and has its being always and everywhere. For Mercy is an annunciation and incarnation of Eternal Love made present within the circle of our little histories. Mercy is a resurrection, a kind of eastering of grace In the one who gives and thus in the one who receives. This is the Love that still draws us, The Voice that still calls, After fifty Golden Years.

Ada Deer, Carmela Lacayo Conclude Symposium by SUSANNE HOFFMAN The &#39;78-&#39;79 Peace and Justice Symposium lectures continued on March 15, 1979 with speeches by Ms. Ada Deer and Ms. Carmela Lacayo. This was the closing session for this year, and was also the first Symposium Workshop in which students and faculty had a

chance to join in discussion groupe focused on some a::1pect of the &#39;78-&#39;79 Peace and Justice Symposiums. In the Twombley-Burden Room of O&#39;Hare Academic Center at 9:00 a.m., the day began with an inspirational lecture by Ms. Ada

Deer. Dressed in traditional Indian attire, Ms. Deer discussed the &quot;current problems and issues in Native American affairs, their historical background in light of a cross cultural perspective.&quot; A member of the Menominee tribe of American Ipdians, Ms. Deer focused on the historical plight of the A~erican Indian and the obstacles they faced in dealing with people who had -not been educated toward an understanding and accepta-iice of them. Th~ Menominee · tribe was offi--.,&#39;.cially established in Wisconsin in .&gt;· 1854, although they have been in the area since the 1600&#39;s. During the period between 1887 and 1934, millions of acres of land were taken from all American Indian tribes, debasing their economic, social, an,d religious lives. Nine and one half million acres were ceded away from the Menominees to the government in the 1800&#39;s. The Indian Reorganization Act halted the actual confiscation of land, but failed to return any of it to the Indi.i,ns. It did not end their oppression either. Ironically, th{!_ American Indians, the first

settlers of this country, were the last to be given citizenship, and were not given the right to vote until 1954. During the next few decades as presidential administrations changed, the outlook toward the American Indian changed. After a switch in relocation of Indians from reservation to city, a movement to recognize American Indian rights occurred during the Kennedy Administration. Then the Nixon policy was self-determination without termination. Ms. Deer stressed the importance of land to the culture of the American Indian. They have a great amount of respect for the land and nature. She referred to the Menominee tribe as &quot;people of the wild rice.&quot; When the government began taking away their land, the basis of their culture was undermined. Once the land has been taken away, declared Ms. Deer, there&#39;s not much left to take. Ms. Deer&#39;s lecture was best summed up in her statement that &quot;no other group personifies the need for social justice better than the American Indian.&quot; With the conclusion of Ms.

A celebration · of witness and service was offered by Rev. William Gibson beginning at two o&#39;clock in the Great Hall. Following the homily, the twenty new members were called forward. All new members received a certificate of membership and lit a

Deer&#39;s lecture, numerous discussion groups met to formulate questions or statements. The purpose of the discussion groups was to &quot;wrap up&quot; the Symposium lectures and reach a conclusion in the form of a question or a statement that tied together either specific lectures, or the entire scope of the &#39;78-&#39;79 Peace and Justice Symi&gt;osium lectures. Ms. Carmela Lacayo addressed the college community in the afternoon on March 15, 1979. Ms. Lacayo lectured on &quot;the ethical principles, assumptions and values found in U.S. legislation.&quot; Her discussion of this issue concerned minority groups in the United States with special reference to

the Hispanic perspective. Ms. Lacayo declared &quot;There is no public policy and there are no ethical assumptions&quot; relating to minority groups in the United States. Public policy has not been synonymous with public interest, as far as minority groups are concerned. Ms. Lacayo stated that most of our policy-makers are W.A.S.P.&#39;s

New Master&#39;s Program To Begin This Summer by BARBARA KIVLEHAN This summer, a new Master of Science program will go into effect. Capt. Michael Dasovitch, chairman of the Management Department at Salve Regina - The Newport College, will direct the Master&#39;s Program in Health Services Administration. This program was one and one-half years in planning. Approved by the Board of Trustees in January, 1979, the Master&#39;s Program in Health Services Administration will officially begin with two courses this coming summer session. This program is the only one of its kind being offered in Rhode Island and southeastern Massachusetts. When asked what career options were available for graduates of this program, Capt. Dasovich commented that this program offers a number of options. For example, some choices are hospital administration, nursing home administration, public health administration, institutional services, medical associations, and hospital associations. Besides, this program will help to prepare nurses

for advancement in administration. There are a few prerequisites for the Master&#39;s Program. Some undergraduate courses in management or in health services administration would be beneficial. However, students with little or no prior management experience can be accepted into the program. The program requirements consist of four foundation courses in management at the graduate level, five required core courses in health management, and three electives. Capt. Dasovich stated that there is a positive reaction to this new program. A number of students, he said, are taking graduate level courses that will enable them to transfer over to the program. Wheh__asked about his reaction to the · program, Capt. Dasovich commented, &quot;I&#39;m very excited about it because it&#39;s such a good program.&#39;&#39; He also stated that a Board of Advisors is being formed to assist the Dean of Graduate School in this new program. This board of advisors will be made up