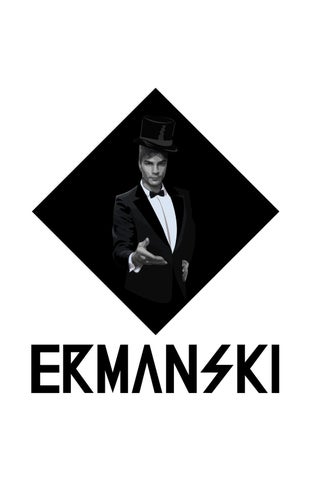 When artist Brian Ermanski first greets us at the door to his Tribeca studio, he’s hardly the man we expect to meet. Instead of the gaunt, scruffy “Prince of Elizabeth Street,” known for his 16th centuryinspired outfits, smudged eyeliner, and tall top hat, we find a clean-cut 31 year old at peak physical condition, worthy of an Abercrombie + Fitch catalogue. Wearing short Adidas shorts and a white t-shirt that show off an athletic build, Ermanski is frenetic and perspiring, excited and hospitable. He’d invited us to visit him at his studio hours before what he calls his “first professional show”—The Black Diamond Show at the Carlton Hotel as part of an event thrown by Untapped PR. He explains he first came up with the idea for his exhibition ten days before, spending six of the days leading up to the event painting over 40 pieces. Considering he has worked nearly 48 hours straight to complete the collection before our arrival, it’s no surprise he offers us a Red Bull, or a bottle of water. As the title of his exhibition suggests, every work in the show is inspired by one particular diamond— the Black Orlov, or the Eye of Brahma—and the myth that surrounds it. As the story goes, the 195-carat diamond was stolen years ago from a Hindu temple, and every person who has since been in possession of it has been cursed, committing suicide as a result. “It started me on this whole journey,” says Ermanski of the gem’s epic history, which he first discovered in 2004. Since then, the black diamond has become a major part of his visual diary, in both form and subject matter—even becoming part of his logo in an abstracted shape. “I wanted something that looks very simple and perfect as is,” he says. “It’s one of the basic symbols of life—the square turned on its side.”

Every piece he created for the show—save one large, loose canvas he calls “Get Off My Cloud”—is made from a black square, always oriented on its point. And while Ermanski relishes in having few influencers, his aesthetic, which he calls “dark pop art,” has been compared to that of Basquiat for its urban-primitive qualities. “In the beginning, I said I don’t want to look at anyone else’s art,” he explains. “I just want to do everything from my own perspective.” And as a result, he confides, most of his works share an advertorial quality with references to consumerism and fashion. “My influences are anything that comes into contact with me,” he explains. “I become a sponge, and then I rinse out the sponge as quickly as possible without overanalyzing.I want it to be recorded as history in the making.” It’s no surprise then that brands, like Hermès or Chanel, pop up more than anything else in his art. “It’s also a tribute to how successful those brands have been, and how much I want to be a part of that tradition,” he says of their longevity. But the significance of the diamond for Ermanski goes deeper, and ties tightly to his bildungsroman. Born on March 17th, 1981, Ermanski grew up in the suburbs of Massachusetts. As a teenager, he attended the all boys prep Saint John’s High School in Shrewsbury. “It was khakis every day, button-down, tie, blazer—very regimented,” he says of his teenage years, describing them as quite… square. He then went on to New York University’s Gallatin School of Individualized Study, where he majored in marketing, advertising, painting, philosophy, psychology, acting, and the classics. After graduation, he stuck around in the city. “For the first time when I was 23 or 24 I was like, you know what, I kind of want to just break free and have nothing holding me back. I have the world at my fingertips—I live in New York City.” In 2004, and with one semester of painting under his belt, he started painting canvases outside an abandoned building on the corner of Prince and Elizabeth Street in Nolita. Meanwhile, he earned his living buying used clothes at thrift stores and reselling them at high-end consignment shops, which then inspired an array of characters, including the dark Elizabeth persona we expected to meet at the door. And though the early 2000s were a creative period for Ermanski, he also spent much of his time on the streets. Looking back now, he describes himself then as “clearheaded, but without much hope.” Two years later, his life altered course when he was assaulted and nearly killed by a bouncer at a Flatiron bar. He suffered intense nerve damage as a result, and has spent the last six years recovering. Though he was able to create during that period—he painted room 506 at The Hotel des Arts in San Francisco, and people like Sean Avery, Debbie Harry and Terry Richardson have purchased or commissioned his work—it’s only now that he is finally ready to focus his life on becoming the artist, actor, and creator he had hoped to be. “I’ve been alone way too long and it’s time to get back into the world,” he says. Having garnered attention from Interview magazine and The Huffington Post, who earlier this year anointed him “The Bad Boy of the Art World,” it would seem Ermanski is on his way. “I used to be square, then I went wild for a while,” he explains of his recent evolution. “Now I’m trying to get back to square, but still have an edge.” Indeed, Ermanski might not have found a better symbol to manifest his journey than that of the black diamond. —Sasha Levine (@sashalevine)

A man goes into the hospital, and friends clean his longtime apartment to prepare for his return. They take it upon themselves to empty the residence of anything that might offend a visiting nurse. So into a big trash bin on Lafayette Street in Greenwich Village went a man’s life’s work: thousands of chalk drawings and paintings, many of them erotic. The story could have ended there, but shortly after the trash bin was filled a young artist happened by. He climbed into the bin and dragged much of the art to the sidewalk. Then he searched inside the container until he found papers revealing the identity of the ailing artist, Edward P. Victus, and used yellow acrylic paint to spell that name out on the sidewalk where he displayed the salvaged artworks. During the next several hours, on Tuesday evening, it was part outdoor gallery and part free-for-all as people strolling past 416 Lafayette Street, between St. Marks Place and West Fourth Street, paused to examine Mr. Victus’s work and ruminate on the odd chain of events that resulted in a man’s intimate thoughts being strewn about in public. There were thousands of chalk drawings, most in muted tones that depicted men and women engaged in sex. There were abstract paintings on canvas. There were also issues of Screw, Pleasure, and The Review of Sex, all devoted to sex. Not all items were explicit. There were audiotapes of the sort used in old reel-to-reel machines and there were record albums, including ‘’Polish Melodies’’ by Frankie Gee and his Orchestra and ‘’Through the Past, Darkly’’ by the Rolling Stones. ‘’This is rewarding because I’m bringing something back into the world that would have been lost forever,’’ said Brian Ermanski, 23, a Manhattan painter who climbed into the trash bin and found Mr. Victus’s work. ‘’I was astonished that his friends would throw this stuff out,’’ said Mr. Ermanski, who explained that he routinely delved into trash bins, motivated mainly by curiosity. He said that he supported himself by buying vintage clothing at thrift stores, then auctioning them on eBay. Many passers-by looked at the drawings littering the ground, lingered a bit to chat and then departed with a drawing or two. ‘’Everybody’s interested in sex,’’ said Elizabeth Suman, 20, a student from SoHo, who rolled one of the chalk drawings into a tube. Then she offered a more philosophical explanation for the works’ appeal: ‘’People like the idea of preserving part of somebody’s life. People are drawn to the idea of immortality.’’ A few moments later, Josh Kaplan, 30, an actor and lawyer from the East Village, admired the artworks. ‘’It’s a very honest portrayal of intimacy,’’ he said. ‘’Everybody in these pictures is smiling.’’ Mr. Kaplan speculated about their inspiration: ‘’I wonder if he actually watched all these people doing this or if this is all from his imagination.’’ Yesterday morning people were still rooting through the trash bin as a man and a woman who would identify themselves only of friends of Mr. Victus arrived. The man would not discuss Mr. Victus’s history other than to say he was ‘’a working stiff.’’ Nor would he talk about Mr. Victus’s illness, except to say that he was in a rehabilitation program and would return home in a few weeks. That is part of what prompted the cleanup, the man said, explaining that Mr. Victus might need a nurse to visit him regularly. ‘’I think it would be beneficial if he had a neater apartment,’’ the man said, adding that Mr. Victus had agreed to the disposal of the art. Mr. Victus could not be reached for comment. Neighbors described him as a retiring but affable figure, who sometimes smoked a pipe in the building elevator and whose apartment walls had been plastered with his drawings. Public records indicated that he is 75, and that he has lived at 416 Lafayette Street since at least 1966. Some of Mr. Victus’s neighbors were still inventorying the trash bin’s contents yesterday. Jeffrey Miles, 21, a English student at New York University, said he had saved Mr. Victus’s tax returns in case he wanted them back, and had begun shooting segments on Tuesday for a documentary film about Mr. Victus’s art. Among the discards in the container were copies of what appeared to be Mr. Victus’s r?m?According to the document, he grew up in Newark and attended Seton Hall University. His first job, it said, was in 1948 as an office manager for the Beauty Brassiere Company in Newark. After that, he served until 1953 in the Air Force. In later years he held office jobs in New York and New Jersey. Tax returns from the mid-1980’s showed that Mr. Victus had worked for the Fundamental Minerals and Metals Corporation in Fort Lee, N.J., and for Minor Metals Inc., also in New Jersey. Nebojsa Seric-Shoba, 36, an artist and neighbor, said he was horrified by the abandonment of the work, but took solace in the fact that many of the drawings and paintings were ending up in people’s homes. ‘’Art is for the people, but these days you have to pay for it,’’ he said. ‘’Last night it was like a communist utopia. You could just walk away with whatever you wanted.’’

Punk Shui is equal parts design manifesto, cultural satire, and how to manual due for release by Random House in April. At it’s heart, it’s an irrevrant wake-up call intended to shake us all out of our daily bland routines, so we can make room for real creativity and vitality in our homes and lives. Brian Ermanski is at the heart of this idea with his art and lifestyle. Nowhere else was I able to find paintings that agreed with my work so well, and that created images that people really responded to. I am espiecially pleased to be able to include Brian’s painting and ideas in Punk Shui. 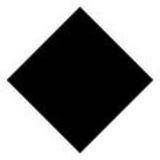