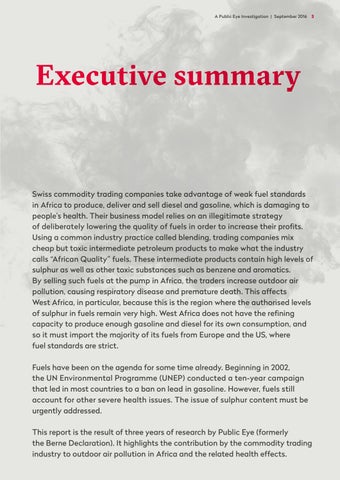 Swiss commodity trading companies take advantage of weak fuel standards in Africa to produce, deliver and sell diesel and gasoline, which is damaging to people’s health. Their business model relies on an illegi­t imate strategy of deliberately lowering the quality of fuels in order to increase their profits. Using a common industry practice called blending, trading companies mix cheap but toxic intermediate petroleum products to make what the industry calls “African Quality” fuels. These intermediate products contain high levels of sulphur as well as other toxic substances such as benzene and aromatics. By selling such fuels at the pump in Africa, the traders increase outdoor air pollution, causing respiratory disease and premature death. This affects West Africa, in particular, because this is the region where the authorised levels of sulphur in fuels remain very high. West Africa does not have the refining capacity to produce enough gasoline and diesel for its own consumption, and so it must import the majority of its fuels from Europe and the US, where fuel standards are strict. Fuels have been on the agenda for some time already. Beginning in 2002, the UN Environmental Programme (UNEP) conducted a ten-year campaign that led in most countries to a ban on lead in gasoline. However, fuels still account for other severe health issues. The issue of sulphur content must be urgently addressed. This report is the result of three years of research by Public Eye (formerly the Berne Declaration). It highlights the contribution by the commodity trading industry to outdoor air pollution in Africa and the related health effects. 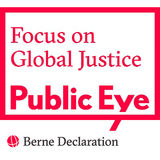