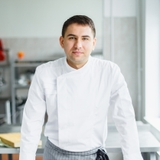 Garrett, who was born in Steilacoom, WA, decided to open his restaurant there. "'Grow where you are planted,' I've always liked to say. When I'm away from home, I daydream about the forests of Washington. The scent of the trees pervades your entire being." Garrett converted an old post office into a restaurant. In the restaurant's entryway, he keeps a rotating exhibit of local and seasonal foods in old post office boxes. Garrett oversees the restaurant's culinary operations. While developing new foods and menus, he oversees the kitchen and its entire staff. Garrett prioritizes local, renewable foods such as salmon and mushrooms over traditional meats and imported haute cuisine elements in his kitchen, with a focus on sustainability.