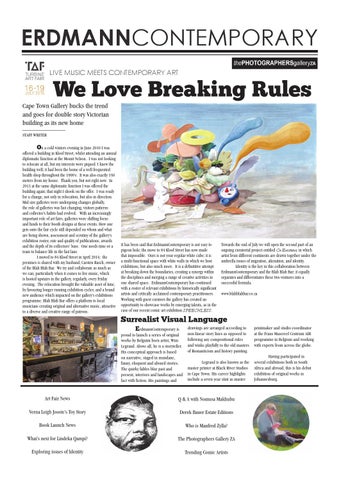 On a cold winters evening in June 2010 I was offered a building in Kloof Street, whilst attending an annual diplomatic function at the Mount Nelson. I was not looking to relocate at all, but my interests were piqued. I knew the building well; it had been the home of a well frequented health shop throughout the 1990’s. It was also exactly 150 meters from my house. Thank you, but not right now. In 2013 at the same diplomatic function I was offered the building again; that night I shook on the offer. I was ready for a change, not only in relocation, but also in direction. Mid size galleries were undergoing changes globally, the role of galleries was fast changing, visitors patterns and collector’s habits had evolved. With an increasingly important role of art fairs, galleries were shifting focus and funds to their booth designs at these events. How one gets onto the fair cycle still depended on whom and what are being shown, assessment and scrutiny of the gallery’s exhibition roster, rate and quality of publications, awards and the depth of its collectors’ base. One needs time or a team to balance life in the fast lane. I moved to 84 Kloof Street in April 2014; the premises is shared with my husband, Carsten Rasch, owner of the Blah Blah Bar. We try and collaborate as much as we can; particularly when it comes to live music, which is hosted upstairs in the gallery, regularly, every Friday evening. The relocation brought the valuable asset of time, by favouring longer running exhibition cycles; and a brand new audience which impacted on the gallery’s exhibitions programme. Blah Blah Bar offers a platform to local musicians creating original and alternative music, attractive to a diverse and creative range of patrons.

It has been said that ErdmannContemporary is not easy to pigeon hole; the move to 84 Kloof Street has now made that impossible. Ours is not your regular white cube; it is a multi-functional space with white walls in which we host exhibitions, but also much more. It is a definititive attempt at breaking down the boundaries, creating a synergy within the disciplines and merging a range of creative activities in one shared space. ErdmannContemporary has continued with a roster of relevant exhibitions by historically significant artists and critically acclaimed contemporary practitioners. Working with guest curators the gallery has created an opportunity to showcase works by emerging talents, as in the case of our recent comic art exhibition SPEECHLESS.

Towards the end of July we will open the second part of an ongoing curatorial project entitled Co-Existence, in which artist from different continents are drawn together under the umbrella issues of migration, alienation, and identity. Identity is the key in this collaboration between ErdmannContemporary and the Blah Blah Bar; it equally separates and differentiates these two ventures into a successful formula. www.blahblahbar.co.za

Surrealist Visual Language ErdmannContemporary is proud to launch a series of original works by Belguim born artist, Wim Legrand. Above all, he is a storyteller. His conceptual approach is based on narrative, staged in mundane, funny, eloquent and absurd stories. The quirky fables blur past and present, interiors and landscapes and fact with fiction. His paintings and

drawings are arranged according to non-linear story lines as opposed to following any compositional rules and winks playfully to the old masters of Romanticism and history painting. Legrand is also known as the master printer at Black River Studios in Cape Town. His career highlights include a seven year stint as master

Q &amp; A with Nomusa Makhubu

What’s next for Lindeka Qampi?

printmaker and studio coordinator at the Frans Masereel Centrum AIR programme in Belgium and working with experts from across the globe. Having participated in several exhibitions both in South Africa and abroad, this is his debut exhibition of original works in Johannesburg.

Identity Politics Visual artist and musician, Garth Erasmus is best known for his innovative use of materials. He has been featured in almost every major book survey of South African art since the late 1980s, and is well represented in the National Museum of African Art, Smithsonian Institute. More than any other South African artist, Erasmus unsettles the hegemonic, exclusionary constructions of African and coloured identity. By pursuing the ‘Khoisan question’, Erasmus enters cultural terrain that has been proclaimed as ‘primitivist’, off limits to the shallow Afropolitanisms of the trendy set. His introspective explorations of his decolonial identity, frequently presented on an intimate scale, stand solidly and silently in opposition to the obligatory, often obscene scale that has become normative. [Words: ASAI website]

Munich, Rome, Grahamstown, London &amp; Hong Kong Zylla was born on 1 February 1939 in Augsburg, Germany. Since 1970 he has been living and working in both, South Africa and Germany. He became prominent as an artist highly critical of apartheid in the 1980’s and his works are widely acknowledged as critical for understanding resistance art, an important chapter in South African art history. He has continued to work within a paradigm of social critique and his work comments on globalisation, urbanisation, climate change, exploitation of natural resources, alternative energy, and attitudes towards disability. Long acknowledged for a conceptual and performative approach to his work, he is also credited for his performative strategies by involving his local community. On 5 June 1982 at the opening of his exhibition/ happening Inter-Actions, Zylla urged friends and fellow artists:

Let’s not write our graffiti in the night; let’s do it now. We must not hold back. Work spontaneously, intuitively. Time is running out. I have done what I can do alone, now let’s go on together.

In 2012 his lifework was curated into a travelling museum exhibition entitled In Retrospect and went on view at museums throughout South Africa. The publication, Manfred Zylla Art &amp; Resistance, launched at the same time provided a broader insight into this artist’s long and dynamic career.

On 12 March 2014 Zylla did a drawing performance at the opening of his solo exhibition, I Want to Swim a Thousand Miles. In the company of his audience, he transformed a Karoo landscape into a strong protest against fracking in that region. The series, 120 Days of Sodom is influenced primarily by three sources. A life-long love of Dante Alighiery’s writing; kinship with Pier Paolo Pasolini’s films, in particular, his last made film, Salò which is the source for much of the imagery in this series, and a conceptual influence, and finally the writings of the Marquis de Sade. Manfred Zylla’s works are included in museum collections in South Africa and Europe, and in numerous private collections including the United States, Canada, South America, England, Europe and Asia. He divides his time between Observatory, Cape Town, South Africa, and Munich, Germany.

Toys for Top Collectors Silversmith Jooste is a daughter of a diamond cutter and has always challenged notions of preciousness. Her whimsical, miniture and functional toy sculptures are all hand-crafted in sterling silver and embedded with gemstones:

Cape Town street photographer, Lindeka Qampi has started on a new body of work entitled Living in the World, which adresses the complex narratives of young men growing up with absent father figures. This series is a collaboration between Qampi and her subjects, and her creative process is designed to encourage these individuals to tell their stories to the world. For the past decade, Qampi, whose photographs are included in the permanent collection of the Museum of Modern Art in San Fransisco, has been focusing her attention on daily township life. Her vast archive of street photography offers an authentic glimpse into a genre most often produced by outsiders.

collage or using surfaces such as windscreens to interfere with the seemingly ‘neutral’ pictorial space. What is your earliest photography-related memory?

Q&amp;A Nomusa Makhubu How would you describe your style or aesthetic, and how has this developed since you first started out? I have always been drawn to the historical and ‘documentary’ aspect in photography. In the projects I have completed or those that are still in progress, I question the ‘documentary’ nature of photography through performance,

A photograph of my maternal grandfather. It is a postcardsize photograph that has always been in our family album. I kept it with me through my high school years and university. I scanned it and kept digital copies. It is looks as though it could have been shot in a studio or at home. He is wearing a neat ‘Worcester’ suit, with his pants ironed so that a line runs down each leg and carries a ‘cloth cap’ in his hand. I assume that this photograph must have been taken in the 1930s or earlier. I have always found this photograph absorbing and intriguing. Debut Solo presentation at START Art Fair, London 2015 AFiRIperFOMA Biennale Lagos, Nigeria November 2015

I am a street photographer and my images of daily township life have been well received. This year I needed a different challenge, more personal, issues that matter to me. Zukile completely understood what I wanted to do and shared his life story and experiences freely. I enjoyed working with him. Qampi is off to Sardinia, Italy later this year to participate in a workshop, exhibition and lecture series with fellow photographer Zanele Muholi.

Political Satire Derek Bauer is considered one of South Africa’s greatest political cartoonists of all time. Almost two decades since his final works, his art is finally being brought back to life, with the Derek Bauer Estate Editions commissioning the restoration and cataloguing of his work. Bauer composed his cartoons with care and insight. His high regard for technical skill and craftsmanship, and his insistence that nothing less than mastery over the discipline of illustration was necessary when it came to using the medium as a tool for his expression.

Cartoons are not Dead Comic book guru and artist Andy Mason (cocurator of SPEECHLESS exhibition) says that Anyone who doubts the political impact of cartoons has been on vacation on Mars for the last decade. Comics are huge in Cape Town, the city is bursting with insane graf, mural art, drawing clubs, animation projects, comix collectives and ‘zines.

Our Top 10 Tips for visiting an Art Fair 01. Comfortable shoes 02. A fully charged credit card 03. A curious and open mind 04. Bring your moleskin note pad &amp; a pen or Ipad 05. Do not be afraid to engage with the booth staff 06. Purchase artists books 07. Collect business cards 08. Have a few galsses of wine or water 09. Do not go hungry, food is expensive 10. Last but not least, enjoy the experience 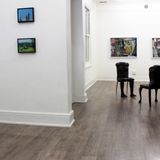