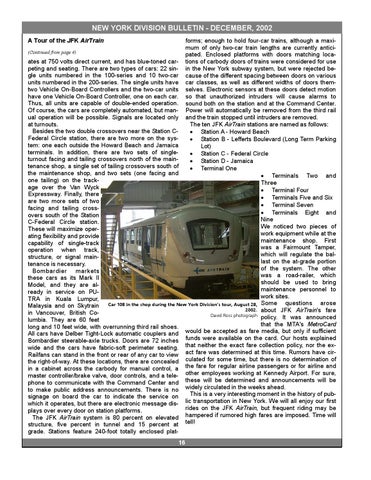 NEWYORK YORKDIVISION DIVISIONBULLETIN BULLETIN- DECEMBER, OCTOBER, 2000 NEW 2002 forms; enough to hold four-car trains, although a maximum of only two-car train lengths are currently antici(Continued from page 4) pated. Enclosed platforms with doors matching locaates at 750 volts direct current, and has blue-toned car- tions of carbody doors of trains were considered for use peting and seating. There are two types of cars: 22 sin- in the New York subway system, but were rejected begle units numbered in the 100-series and 10 two-car cause of the different spacing between doors on various units numbered in the 200-series. The single units have car classes, as well as different widths of doors themtwo Vehicle On-Board Controllers and the two-car units selves. Electronic sensors at these doors detect motion have one Vehicle On-Board Controller, one on each car. so that unauthorized intruders will cause alarms to Thus, all units are capable of double-ended operation. sound both on the station and at the Command Center. Of course, the cars are completely automated, but man- Power will automatically be removed from the third rail ual operation will be possible. Signals are located only and the train stopped until intruders are removed. at turnouts. The ten JFK AirTrain stations are named as follows: Besides the two double crossovers near the Station C• Station A - Howard Beach Federal Circle station, there are two more on the sys• Station B - Lefferts Boulevard (Long Term Parking tem: one each outside the Howard Beach and Jamaica Lot) terminals. In addition, there are two sets of single• Station C - Federal Circle turnout facing and tailing crossovers north of the main• Station D - Jamaica tenance shop, a single set of tailing crossovers south of • Terminal One the maintenance shop, and two sets (one facing and • Terminals Two and one tailing) on the trackThree age over the Van Wyck • Terminal Four Expressway. Finally, there • Terminals Five and Six are two more sets of two • Terminal Seven facing and tailing cross• Terminals Eight and overs south of the Station Nine C-Federal Circle station. We noticed two pieces of These will maximize operwork equipment while at the ating flexibility and provide maintenance shop. First capability of single-track was a Fairmount Tamper, operation when track, which will regulate the balstructure, or signal mainlast on the at-grade portion tenance is necessary. of the system. The other Bombardier markets was a road-railer, which these cars as its Mark II should be used to bring Model, and they are almaintenance personnel to ready in service on PUwork sites. TRA in Kuala Lumpur, Some questions arose Car 108 in the shop during the New York Division’s tour, August 28, Malaysia and on Skytrain 2002. about JFK AirTrain's fare in Vancouver, British CoDavid Ross photograph policy. It was announced lumbia. They are 60 feet that the MTA's MetroCard long and 10 feet wide, with overrunning third rail shoes. would be accepted as fare media, but only if sufficient All cars have Delber Tight-Lock automatic couplers and funds were available on the card. Our hosts explained Bombardier steerable-axle trucks. Doors are 72 inches that neither the exact fare collection policy, nor the exwide and the cars have fabric-soft perimeter seating. act fare was determined at this time. Rumors have cirRailfans can stand in the front or rear of any car to view culated for some time, but there is no determination of the right-of-way. At these locations, there are concealed in a cabinet across the carbody for manual control, a the fare for regular airline passengers or for airline and master controller/brake valve, door controls, and a tele- other employees working at Kennedy Airport. For sure, phone to communicate with the Command Center and these will be determined and announcements will be to make public address announcements. There is no widely circulated in the weeks ahead. This is a very interesting moment in the history of pubsignage on board the car to indicate the service on lic transportation in New York. We will all enjoy our first which it operates, but there are electronic message disrides on the JFK AirTrain, but frequent riding may be plays over every door on station platforms. hampered if rumored high fares are imposed. Time will The JFK AirTrain system is 80 percent on elevated tell! structure, five percent in tunnel and 15 percent at A Tour of the JFK AirTrain 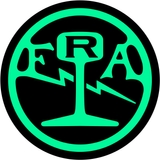