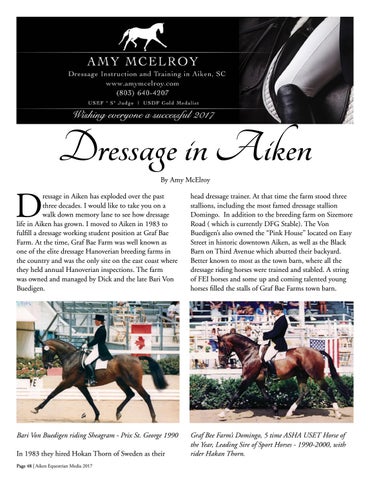 Dressage in Aiken By Amy McElroy

ressage in Aiken has exploded over the past three decades. I would like to take you on a walk down memory lane to see how dressage life in Aiken has grown. I moved to Aiken in 1983 to fulfill a dressage working student position at Graf Bae Farm. At the time, Graf Bae Farm was well known as one of the elite dressage Hanoverian breeding farms in the country and was the only site on the east coast where they held annual Hanoverian inspections. The farm was owned and managed by Dick and the late Bari Von Buedigen.

head dressage trainer. At that time the farm stood three stallions, including the most famed dressage stallion Domingo. In addition to the breeding farm on Sizemore Road ( which is currently DFG Stable). The Von Buedigen’s also owned the “Pink House’’ located on Easy Street in historic downtown Aiken, as well as the Black Barn on Third Avenue which abutted their backyard. Better known to most as the town barn, where all the dressage riding horses were trained and stabled. A string of FEI horses and some up and coming talented young horses filled the stalls of Graf Bae Farms town barn.

An Equestrian Resource for Aiken.SC and the surrounding area. 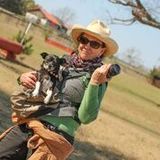