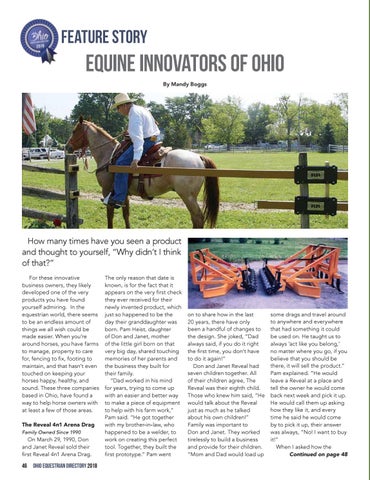 How many times have you seen a product and thought to yourself, “Why didn’t I think of that?” For these innovative business owners, they likely developed one of the very products you have found yourself admiring. In the equestrian world, there seems to be an endless amount of things we all wish could be made easier. When you‘re around horses, you have farms to manage, property to care for, fencing to fix, footing to maintain, and that hasn’t even touched on keeping your horses happy, healthy, and sound. These three companies based in Ohio, have found a way to help horse owners with at least a few of those areas. The Reveal 4n1 Arena Drag Family Owned Since 1990

The only reason that date is known, is for the fact that it appears on the very first check they ever received for their newly invented product, which just so happened to be the day their granddaughter was born. Pam Heist, daughter of Don and Janet, mother of the little girl born on that very big day, shared touching memories of her parents and the business they built for their family. “Dad worked in his mind for years, trying to come up with an easier and better way to make a piece of equipment to help with his farm work,” Pam said. “He got together with my brother-in-law, who happened to be a welder, to work on creating this perfect tool. Together, they built the first prototype.” Pam went

on to share how in the last 20 years, there have only been a handful of changes to the design. She joked, “Dad always said, if you do it right the first time, you don’t have to do it again!” Don and Janet Reveal had seven children together. All of their children agree, The Reveal was their eighth child. Those who knew him said, “He would talk about the Reveal just as much as he talked about his own children!” Family was important to Don and Janet. They worked tirelessly to build a business and provide for their children. “Mom and Dad would load up

some drags and travel around to anywhere and everywhere that had something it could be used on. He taught us to always ‘act like you belong,’ no matter where you go, if you believe that you should be there, it will sell the product.” Pam explained. “He would leave a Reveal at a place and tell the owner he would come back next week and pick it up. He would call them up asking how they like it, and every time he said he would come by to pick it up, their answer was always, “No! I want to buy it!” When I asked how the Continued on page 48

Ohio Equestrian Directory was created for YOU…owners, riders, professionals and businesses of all disciplines…to help you connect within the local horse community. More than just a business directory, it also features content on trending topics, the best practices and innovators in the industry, plus tips from the pros. 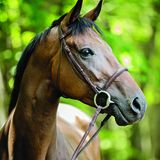