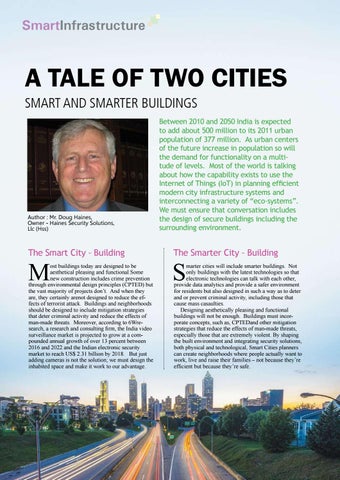 A TALE OF TWO CITIES SMART AND SMARTER BUILDINGS

ost buildings today are designed to be aesthetical pleasing and functional.Some new construction includes crime prevention through environmental design principles (CPTED) but the vast majority of projects don’t. And when they are, they certainly arenot designed to reduce the effects of terrorist attack. Buildings and neighborhoods should be designed to include mitigation strategies that deter criminal activity and reduce the effects of man-made threats. Moreover, according to 6Wresearch, a research and consulting firm, the India video surveillance market is projected to grow at a compounded annual growth of over 13 percent between 2016 and 2022 and the Indian electronic security market to reach US$ 2.31 billion by 2018. But just adding cameras is not the solution; we must design the inhabited space and make it work to our advantage.

Between 2010 and 2050 India is expected to add about 500 million to its 2011 urban population of 377 million. As urban centers of the future increase in population so will the demand for functionality on a multitude of levels. Most of the world is talking about how the capability exists to use the Internet of Things (IoT) in planning efficient modern city infrastructure systems and interconnecting a variety of “eco-systems”. We must ensure that conversation includes the design of secure buildings including the surrounding environment.

marter cities will include smarter buildings. Not only buildings with the latest technologies so that electronic technologies can talk with each other, provide data analytics and provide a safer environment for residents but also designed in such a way as to deter and or prevent criminal activity, including those that cause mass casaulties. Designing aesthetically pleasing and functional buildings will not be enough. Buildings must incorporate concepts, such as, CPTEDand other mitigation strategies that reduce the effects of man-made threats, especially those that are extremely violent. By shaping the built environment and integrating security solutions, both physical and technological, Smart Cities planners can create neighborhoods where people actually want to work, live and raise their families – not because they’re efficient but because they’re safe. 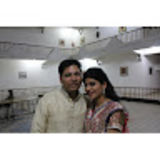