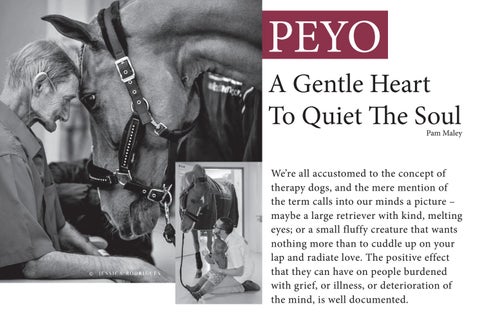 Weâ&#x20AC;&#x2122;re all accustomed to the concept of therapy dogs, and the mere mention of the term calls into our minds a picture â&#x20AC;&#x201C; maybe a large retriever with kind, melting eyes; or a small fluffy creature that wants nothing more than to cuddle up on your lap and radiate love. The positive effect that they can have on people burdened with grief, or illness, or deterioration of the mind, is well documented.

But move over, mental pictures, and make room for Peyo, a full-size chestnut horse that does his therapy work in Dijon, France. He makes regular twice-monthly visits to hospitals, nursing homes, pediatric clinics, palliative (end-of life pain relief) units, and Alzheimer’s and psychiatric facilities. As they traveled to shows, Bouchakour noticed that the horse was drawn to people with disabilities. His normally fiery personality would become quiet and gentle in their presence, inviting their touch. After Bouchakour lost someone dear to him, he decided to take Peyo in a new direction. For three years, they trained together to get the horse used to walking calmly on different surfaces, and to get him to take care of his ‘needs’ outside only – yes, he’s housetrained! An experienced show horse, he was already accustomed to being surrounded by noise, and he has learned to turn on a dime in small indoor spaces. Before entering any building, a strict protocol must be followed. Peyo’s mane and tail must be braided, his hooves thoroughly cleaned and oiled, an antiseptic lotion applied to his entire body; and he must wear a blanket. With his partner by his side, he moves easily and without fear, even walking onto the elevator. As he enters a facility, something amazing begins to happen. Though Bouchakour is with him at all times, Peyo is given free rein to go where he wants to go, and to everyone’s wonder, he seems always to choose the patients that need him most, those that are the most ill.

Two times a month, he visits hospitals and residential homes.

Peyo has a partner and constant companion, Hassen Bouchakour, a multiple world champion in artistic dressage. About six years ago, in his midtwenties, he was searching for a new horse to add to his competition string, when Peyo came into his life. It was definitely not love at first sight. Frustrated and discouraged, Bouchakour had finally put the horse up for sale, when things began to fall into place. This was the beginning of what has become a deep bond of intimate understanding between the two.

A silent communication springs up immediately, even among those who can no longer speak. Patients who are often angry and aggressive become calm. Those who have become too discouraged to walk start walking. Patients who don’t speak often find words. It is said that some of the ladies in the nursing homes go to the hairdresser in anticipation of Peyo’s regular visits, so they can look their best when he comes. Totally comfortable with the patients, Peyo will move close to them and give gentle nuzzles and sniffs and the occasional lick on the hand. In the nursing home Orchard Chartreuse, “He’s at home,” says one of the caregivers, Sandrine Bougenot, with a smile. She says that one of her patients speaks very little, and only in Hungarian; but when Peyo makes contact, she speaks in fluent French. In the hospitals, as he moves down the halls, Peyo often chooses the rooms of neardeath patients, eliciting a glow that had long since left their faces. But don’t call it a miracle. “The horse soothes the patients, and awakens things in them that have been buried, but in no case does he do miracles,” says his trainer. In the culture of his homeland, the Maghreb (the northern states of Africa that border the Mediterranean Sea), children care for the elderly. Clémentine Mercier of Ouest-France, in his prize-winning article “Dr. Peyo,” quotes Bouchakour, “My goal is to make people understand that we are not condemned to be abandoned because of an illness. We must not forget that there is always a heart that beats.” In this magical partnership, it seems, two gentle souls have collided.

No one forces Peyo to go anywhere... 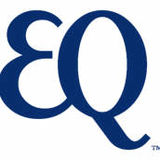 Featured Editorial - PEYO, A Gentle Heart To Quiet The Soul

An inspirational story about Peyo, a full-size chestnut horse that does his therapy work in Dijon, France.

Featured Editorial - PEYO, A Gentle Heart To Quiet The Soul

An inspirational story about Peyo, a full-size chestnut horse that does his therapy work in Dijon, France.