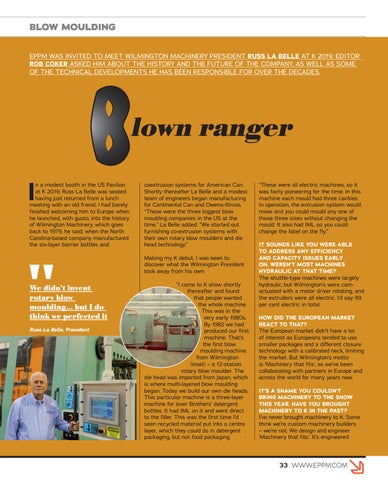 BLOW MOULDING EPPM WAS INVITED TO MEET WILMINGTON MACHINERY PRESIDENT RUSS LA BELLE AT K 2019. EDITOR ROB COKER ASKED HIM ABOUT THE HISTORY AND THE FUTURE OF THE COMPANY, AS WELL AS SOME OF THE TECHNICAL DEVELOPMENTS HE HAS BEEN RESPONSIBLE FOR OVER THE DECADES.

n a modest booth in the US Pavilion at K 2019, Russ La Belle was seated having just returned from a lunch meeting with an old friend. I had barely finished welcoming him to Europe when he launched, with gusto, into the history of Wilmington Machinery, which goes back to 1979, he said, when the North Carolina-based company manufactured the six-layer barrier bottles and

lown ranger coextrusion systems for American Can. Shortly thereafter La Belle and a modest team of engineers began manufacturing for Continental Can and Owens-Illinois. “These were the three biggest blow moulding companies in the US at the time,” La Belle added. “We started out furnishing co-extrusion systems with their own rotary blow moulders and die head technology.” Making my K debut, I was keen to discover what the Wilmington President took away from his own.

We didn’t invent rotary blow moulding… but I do think we perfected it Russ La Belle, President

“I came to K show shortly thereafter and found that people wanted the whole machine. This was in the very early 1980s. By 1982 we had produced our first machine. That’s the first blow moulding machine from Wilmington (inset) – a 12-station rotary blow moulder. The die head was imported from Japan, which is where multi-layered blow moulding began. Today we build our own die heads. This particular machine is a three-layer machine for lever Brothers’ detergent bottles. It had IML on it and went direct to the filler. This was the first time I’d seen recycled material put into a centre layer, which they could do in detergent packaging, but not food packaging.

“These were all electric machines, so it was fairly pioneering for the time. In this machine each mould had three cavities. In operation, the extrusion system would move and you could mould any one of those three sizes without changing the mould. It also had IML so you could change the label on the fly.” IT SOUNDS LIKE YOU WERE ABLE TO ADDRESS ANY EFFICIENCY AND CAPACITY ISSUES EARLY ON. WEREN’T MOST MACHINES HYDRAULIC AT THAT TIME? The shuttle-type machines were largely hydraulic, but Wilmington’s were camactuated with a motor driver rotating, and the extruders were all electric. I’d say 99 per cent electric in total. HOW DID THE EUROPEAN MARKET REACT TO THAT? The European market didn’t have a lot of interest as Europeans tended to use smaller packages and a different closure technology with a calibrated neck, limiting the market. But Wilmington’s motto is ‘Machinery that fits’, so we’ve been collaborating with partners in Europe and across the world for many years now. IT’S A SHAME YOU COULDN’T BRING MACHINERY TO THE SHOW THIS YEAR. HAVE YOU BROUGHT MACHINERY TO K IN THE PAST? I’ve never brought machinery to K. Some think we’re custom machinery builders – we’re not. We design and engineer ‘Machinery that fits’. It’s engineered 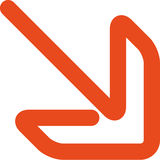