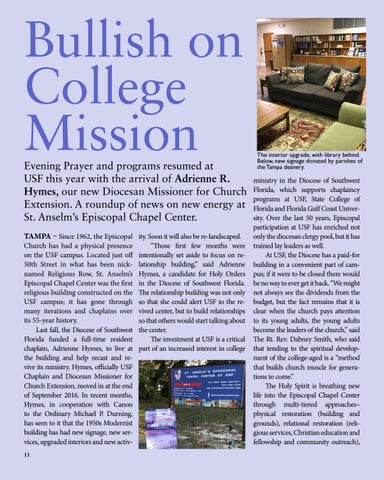 Evening Prayer and programs resumed at USF this year with the arrival of Adrienne R. Hymes, our new Diocesan Missioner for Church Extension. A roundup of news on new energy at St. Anselm’s Episcopal Chapel Center. TAMPA – Since 1962, the Episcopal ity. Soon it will also be re-landscaped.

Church has had a physical presence on the USF campus. Located just off 50th Street in what has been nicknamed Religious Row, St. Anselm’s Episcopal Chapel Center was the first religious building constructed on the USF campus; it has gone through many iterations and chaplains over its 55-year history. Last fall, the Diocese of Southwest Florida funded a full-time resident chaplain, Adrienne Hymes, to live at the building and help recast and revive its ministry. Hymes, officially USF Chaplain and Diocesan Missioner for Church Extension, moved in at the end of September 2016. In recent months, Hymes, in cooperation with Canon to the Ordinary Michael P. Durning, has seen to it that the 1950s Modernist building has had new signage, new services, upgraded interiors and new activ11

“Those first few months were intentionally set aside to focus on relationship building,” said Adrienne Hymes, a candidate for Holy Orders in the Diocese of Southwest Florida. The relationship building was not only so that she could alert USF to the revived center, but to build relationships so that others would start talking about the center. The investment at USF is a critical part of an increased interest in college

The interior upgrade, with library behind. Below, new signage donated by parishes of the Tampa deanery.

ministry in the Diocese of Southwest Florida, which supports chaplaincy programs at USF, State College of Florida and Florida Gulf Coast University. Over the last 50 years, Episcopal participation at USF has enriched not only the diocesan clergy pool, but it has trained lay leaders as well. At USF, the Diocese has a paid-for building in a convenient part of campus; if it were to be closed there would be no way to ever get it back. “We might not always see the dividends from the budget, but the fact remains that it is clear when the church pays attention to its young adults, the young adults become the leaders of the church,” said The Rt. Rev. Dabney Smith, who said that tending to the spiritual development of the college-aged is a “method that builds church muscle for generations to come.” The Holy Spirit is breathing new life into the Episcopal Chapel Center through multi-tiered approaches– physical restoration (building and grounds), relational restoration (religious services, Christian education and fellowship and community outreach), 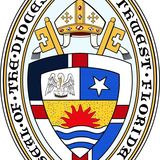