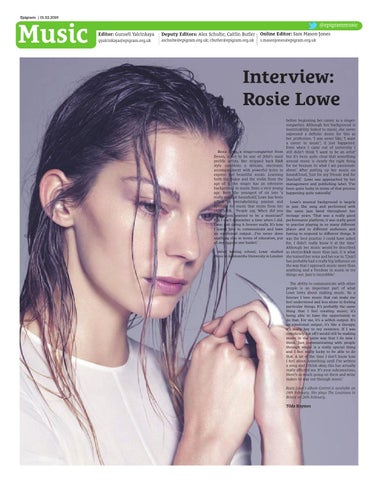 Interview: Rosie Lowe Rosie Lowe, a singer-songwriter from Devon, is set to be one of 2016’s most prolific artists. Her stripped back R&amp;B style combines a delicate, electronic accompaniment with powerful lyrics to express her beautiful vocals. Learning both the piano and the violin from the age of 5, the singer has an extensive background in music from a very young age. Born the youngest of six into ‘a really musical household,’ Lowe has been gifted an overwhelming passion and aptitude for music that stems from her childhood. ‘People say, ‘When did you decide you wanted to be a musician?’ but I can’t remember a time when I did. I was just doing it forever really. It’s how I learnt how to communicate and have an emotional output…I’ve never done anything else in terms of education, put all my eggs in one basket.’

before beginning her career as a singersongwriter. Although her background is inextricability linked to music, she never expressed a definite desire for this as her profession. ‘I was never like, ‘I want a career in music’; it just happened. Even when I came out of university I still didn’t think ‘I want to be an artist’ but it’s been quite clear that something around music is clearly the right thing for me because its what I am passionate about.’ After putting up her music on SoundCloud, ‘just for my friends and for [her]self,’ Lowe was approached by her management and publishing label. ‘I’ve been quite lucky in terms of that process happening quite naturally.’

Lowe’s musical background is largely in jazz. She sang and performed with the same jazz band throughout her teenage years. ‘That was a really good performance platform; it was really good to practise playing in so many different places and to different audiences and having to respond to different things. It was the best practise I could have asked for; I didn’t really know it at the time.’ Although her music would be described After leaving school, Lowe studied as electro-R&amp;B more than jazz, it is what Music at Goldsmiths University in London she trained her voice and her ear in. ‘[Jazz] has probably had a really big influence on the way that I approach music more than anything and a freedom in music to try things out. Jazz is incredible.’ The ability to communicate with other people is an important part of what Lowe loves about making music. ‘As a listener I love music that can make me feel understood and less alone in feeling particular things. It’s probably the same thing that I feel creating music; it’s being able to have the opportunity to do that. For me, it’s a selfish output. It’s an emotional output, it’s like a therapy, it’s really key to my existence. If I was completely cut off I would still be making music in the same way that I do now I think. Just communicating with people through music is a really special thing and I feel really lucky to be able to do that. A lot of the time I don’t know how I feel about something until I’ve written a song and I think okay, this has actually really affected me. It’s your subconscious, there’s so much going on there and mine makes its way out through music.’ Rosie Lowe’s album Control is available on 19th February. She plays The Louisiana in Bristol on 26th February. Tilda Haymes

IN THIS ISSUE: NEWS - Labour Mayoral candidate urges students to make their voice heard in next May election. FEATURES - Bristol students tackle the #homelessperiod. LETTERS - A Letter to the Locals. STYLE - All that JUNK: launching a fashion start-up in Bristol. FOOD - Pinkmans comes to Park Street. ARTS - 250 years of the Bristol Old Vic. AND MUCH MORE. 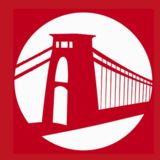