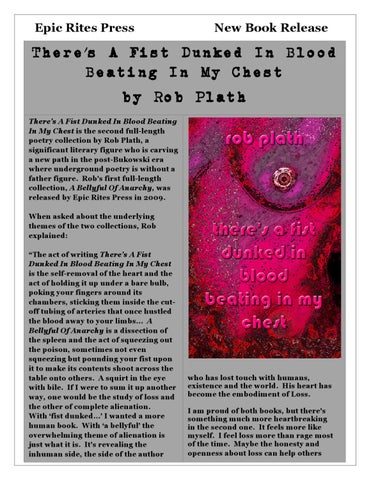 There’ There’s A Fist Dunked In Blood Beating In My Chest by Rob Plath There’s A Fist Dunked In Blood Beating In My Chest is the second full-length poetry collection by Rob Plath, a significant literary figure who is carving a new path in the post-Bukowski era where underground poetry is without a father figure. Rob’s first full-length collection, A Bellyful Of Anarchy, was released by Epic Rites Press in 2009. When asked about the underlying themes of the two collections, Rob explained: “The act of writing There’s A Fist Dunked In Blood Beating In My Chest is the self-removal of the heart and the act of holding it up under a bare bulb, poking your fingers around its chambers, sticking them inside the cutoff tubing of arteries that once hustled the blood away to your limbs... A Bellyful Of Anarchy is a dissection of the spleen and the act of squeezing out the poison, sometimes not even squeezing but pounding your fist upon it to make its contents shoot across the table onto others. A squirt in the eye with bile. If I were to sum it up another way, one would be the study of loss and the other of complete alienation. With ‘fist dunked...’ I wanted a more human book. With ‘a bellyful’ the overwhelming theme of alienation is just what it is. It’s revealing the inhuman side, the side of the author

who has lost touch with humans, existence and the world. His heart has become the embodiment of Loss. I am proud of both books, but there&#39;s something much more heartbreaking in the second one. It feels more like myself. I feel loss more than rage most of the time. Maybe the honesty and openness about loss can help others

There’ There’s A Fist Dunked In Blood Beating In My Chest by Rob Plath as if it wasn’t crowded enough sometimes it feels like loss plants another skeleton inside of you as if it wasn’t crowded enough w/one set of bones some nights you can feel them slowly turning in a tight embrace this melancholy couple dancing w/in it’s almost kind of sweet on those nights i drink away &amp; whistle a solemn tune to this strange moving union

who are numb. What is that line from that french film Blue? During the suffering from a great loss, the woman returns home from the hospital and her housekeeper is weeping. The woman who has suffered the horrific loss asks, ‘why are you crying?’ and the old woman responds, ‘because you are not...’”

“The poet of this collection ruminates upon love and death through different prisms: a mother’s mortality, a lover’s infidelity and a growing awareness that even evil bastard fathers had their reasons. Much of the poetry here speaks of sparks in the darkness, honest appraisals of the reality of love to individuals. The couple sits ‘marrow to marrow’ in ‘to hell w/ all the so-called cities of love’, not heart to heart. This is love stripped down by desperation...” – Zack Wilson, author of Lescar

There’ There’s A Fist Dunked In Blood Beating In My Chest by Rob Plath When asked about his motivation for writing the new book, Plath explained: “I was always hesitant to write about previous relationships because I always wound up being with someone that would cause all kinds of fights over me writing about other women. Some of the poems I did have were written in between love, but I never really delved into that side of my existence. I also had so much to say about other things, that I let that part go. I had enough chaos in my life and I felt that if not writing about other women would leave me peace then it was worth it. Looking back it seems weak, though. They all left in the end anyway. I’ll never be that way again. The catalyst for ‘fist dunked...’ was a damaging, crazy relationship for four years. Co-habitation. Almost marriage. Infidelity on the other’s part. The whole experience caused a profound change in me. In a way, I am glad I went through it – like so many other things I write about that are very painful. It also opened the door to writing about other relationships I had been in as well. And also, other kinds of loss that comes with intimacy. I’ll tell you one thing, I’ll never be secretive about writing about who I am with. Never again. That’s a promise in blood.”

for now i wait w/the worms

they can mash the maggot out of anything but for now i bide my time w/ the worms w/ whom do you wait?

Plath explained further: “Now looking at what I’ve just written, I can also say that I might not have been able to reach the kind of depth, clarity and emotion had it not been for the last relationship. Perhaps the writings of love at an earlier time in my life would have not been as intense and full of blood. Perhaps it was the perfect time to break on through...”

There’ There’s A Fist Dunked In Blood Beating In My Chest by Rob Plath “Read Rob Plath at your own risk. His words will stick behind your eyes. His heart may even expose a shadow you’ve kept hidden from yourself.” – Dan Fante, author of Kissed By A Fat Waitress “Plath is a merciless poet. He is not afraid of drawing blood, even his own. He will blow psychic holes in your being. He will leave you wounded.” – Todd Moore, author of Dead Reckoning

honeycomb of pain someone asked me where all my loss is stored i told them my loss shoulders its way through membranes of cells nudging the nourishing nuclei out of the center ring &amp; there it sits in each unit like a bottomless dark eye “In the war over the heart and soul of modern poetry, Rob Plath will be the last man standing.” – John Yamrus, author of Doing Cartwheels On Doomsday Afternoon

If A Bellyful Of Anarchy was Plath’s monster, then There’s A Fist Dunked In Blood Beating In My Chest is the bride of the creature. Eighty-two new poems by Plath are presented in this volume, with an additional six poems riding shotgun in the footer of every page. 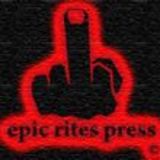