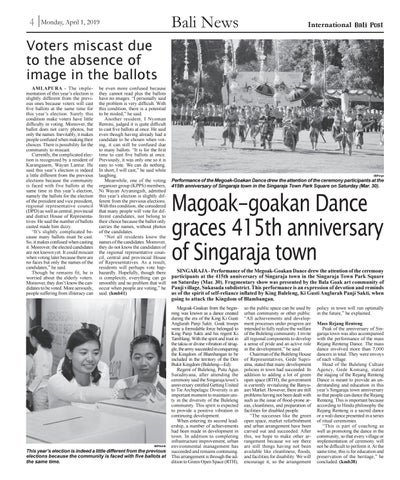 Voters miscast due to the absence of image in the ballots

AMLAPURA - The implementation of this year’s election is slightly different from the previous ones because voters will cast five ballots at the same time for this year’s election. Surely this condition make voters have little difficulty in voting. Moreover, the ballot does not carry photos, but only the names. Inevitably, it makes people confused when making their choices. There is possibility for the community to miscast. Currently, the complicated election is recognized by a resident of Karangasem, Wayan Lantur. He said this year’s election is indeed a little different from the previous elections because the community is faced with five ballots at the same time in this year’s election, namely the ballots for the election of the president and vice president, regional representative council (DPD) as well as central, provincial and district House of Representatives. He said the number of ballots casted made him dizzy. “It’s slightly complicated because many ballots must be cast. So, it makes confused when casting it. Moreover, the elected candidates are not known yet. It could miscast when voting later because there are no faces but only the names of the candidates,” he said. Though he remains fit, he is worried about the elderly voters. Moreover, they don’t know the candidates to be voted. More seriously, people suffering from illiteracy can

be even more confused because they cannot read plus the ballots have no images. “I personally said the problem is very difficult. With this condition, there is a potential to be misled,” he said. Another resident, I Nyoman Remini, judged it is quite difficult to cast five ballots at once. He said even though having already had a candidate to be chosen when voting, it can still be confused due to many ballots. “It is for the first time to cast five ballots at once. Previously, it was only one so it is easy to vote. We can do nothing. In short, I will cast,” he said while laughing. Meanwhile, one of the voting organizer group (KPPS) members, Ni Wayan Aryaningsih, admitted this year’s election is slightly different from the previous elections. With this condition, she considered that many people will vote for different candidates, not belong to their choice because the ballot only carries the names, without photos of the candidates. “Not all residents know the names of the candidates. Moreover, they do not know the candidates of the regional representative council, central and provincial House of Representatives. As a result, residents will perhaps vote haphazardly. Hopefully, though there is complexity, everything can go smoothly and no problem that will occur when people are voting,” he said. (kmb41)

This year’s election is indeed a little different from the previous elections because the community is faced with five ballots at the same time.

CAPE GRIM - As much of Asia wheezes, coughs and sniffles its way through another smog season, one isolated and windswept corner of Australia is serving as the global standard for clean air.

Performance of the Megoak-Goakan Dance drew the attention of the ceremony participants at the 415th anniversary of Singaraja town in the Singaraja Town Park Square on Saturday (Mar. 30).

SINGARAJA - Performance of the Megoak-Goakan Dance drew the attention of the ceremony participants at the 415th anniversary of Singaraja town in the Singaraja Town Park Square on Saturday (Mar. 30). Fragmentary show was presented by the Bala Goak art community of Panji village, Sukasada subdistrict. This performance is an expression of devotion and reminds us of the spirit of self-reliance inflated by King Buleleng, Ki Gusti Anglurah Panji Sakti, when going to attack the Kingdom of Blambangan. Megoak-Goakan from the beginning was known as a dance created during the era of the King Ki Gusti Anglurah Panji Sakti. Goak troops were a formidable force belonged to King Panji Sakti and his regent Ki Tamblang. With the spirit and trust in the taksu or divine vibration of struggle, the army succeeded in conquering the Kingdom of Blambangan to be included in the territory of the Den Bukit Kingdom (Buleleng—Ed). Regent of Buleleng, Putu Agus Suradnyana, after attending the ceremony said the Singaraja town’s anniversary entitled Getting United to Tie Archipelagic Diversity is an important moment to maintain unity in the diversity of the Buleleng community. This spirit is expected to provide a positive vibration in continuing development. When entering its second leadership, a number of achievements had been made in development in town. In addition to completing infrastructure improvement, urban environmental management has succeeded and remains continuing. This arrangement is through the addition to Green Open Space (RTH),

so the public space can be used by urban community or other public. “All achievements and development processes under progress are intended to fully realize the welfare of the Buleleng community. I invite all regional components to develop a sense of pride and an active role in the development,” he said. Chairman of the Buleleng House of Representatives, Gede Supriatna, stated that many development policies in town had succeeded. In addition to adding a lot of green open space (RTH), the government is currently revitalizing the Banyuasri Market. However, there are still problems having not been dealt with such as the issue of flood-prone areas, cleanliness, and preparation of facilities for disabled people. “The successes like the green open space, market refurbishment and urban arrangement have been carried out and succeeded. After this, we hope to make other arrangement because we see there are still things having not been available like cleanliness, floods, and facilities for disability. We will encourage it, so the arrangement

policy in town will run optimally in the future,” he explained. Mass Rejang Renteng Peak of the anniversary of Singaraja town was also accompanied with the performance of the mass Rejang Renteng Dance. The mass dance involved more than 7,000 dancers in total. They were envoys of each village. Head of the Buleleng Culture Agency, Gede Komang, stated the staging of the Rejang Renteng Dance is meant to provide an understanding and education in this year’s Singaraja town anniversary so that people can dance the Rejang Renteng. This is important because according to Hindu philosophy the Rejang Renteng is a sacred dance or a wali dance presented in a series of ritual ceremonies. “This is part of coaching as well as promoting the dance in the community, so that every village or implementation of ceremony will not be difficult to perform it. At the same time, this is for education and preservation of the heritage,” he concluded. (kmb38)

With panoramic views of swaying tussock grass and the vast crystalline expanse of the Southern Ocean, Tasmania’s beautiful Cape Grim peninsula is an unlikely reference point for the scientific world. But since 1976, this wild and blustery spot has been home to the Cape Grim Baseline Air Pollution Station -- a small Australian government facility with the seemingly eccentric task of bottling air. “Our job is essentially to find air as clean as you’re likely to find anywhere in the world and measure just how polluted it is,” Sam Cleland, the officer in charge of the station, told AFP. Looking out from his office atop the high sea cliffs, the nearest landmass to the west is Argentina, and there is nothing to the south except Antarctica. The facility’s isolated location makes it perfect for collecting what many have dubbed the cleanest air in the world -- what air would be like without choking exhaust fumes or industrial smoke. When the wind blows from the southwest, Cleland and his team capture a sample using finely tuned instruments. Their kit is so sensitive that delivery trucks chugging down the dirt track from the nearest town -- an hour away -- are all logged, in case they potentially skew the readings. - Clean air economy While the world’s most polluted cities struggle to attract talent or manage chronic illnesses, residents around Cape Grim have made a virtue of their relatively pristine environment. Local beef is marketed with links to scien-

While the world’s most polluted cities struggle to attract talent or manage chronic illnesses, residents around Cape Grim have made a virtue of their relatively pristine environment. tific papers on air quality, the number of wind farms has increased, and tourism is a growing sector. Mike Buckby, a “rain farmer” from the Cape Grim Water Company, has taken things to another level, harvesting water falling “from Earth’s purest skies.” “Most waters of the world are spring waters,” he explains as he looks out over a system of tarps, sluices and reservoirs set back from the coast.

“The rain that comes off the Great Southern Ocean, that’s what we depend on,” Buckby said, adding that his remarkably sweet-tasting water is little more than H2O and trace amounts of sodium picked up from the sea. “It will have a little bit of sodium but it’s very neutral and it’s very soft,” he said. “In normal spring water, you’ll have high magnesium, you’ll have some naturally occurring nitrates, phosphorus, potassium.”

Buckby says the monitoring station and the clean air it measures have helped local produce stand out in a competitive market. “This probably wouldn’t work without the monitoring station at Cape Grim,” he admitted. “Yes, we sell the romance,” he said, adding: “But look, there’s 43 years of data that says this is the cleanest mix of air in the world.” (afp)

In Rwanda, a source of forgiveness after genocide

Villagers walk on a road which separates two villages, at the border between Musambira and Nyarubaka sectors of Kamonyi District on March 4, 2019. Two villages on adjascent hills are re-learning to share all they have, including a well-spring at the bottom of the valley, after 1994 genocide.

RUSEKE - A trickle of water flows out of a lush green valley in Rwanda, the two villages on either side of the life-giving spring living peacefully with each other for years. Then the horrors of the 1994 genocide changed all that. Those on one side of the valley in the village of Giheta turned on their neighbours across the way in the village of Ruseke. Gangs of machete-wielding men hacked their neighbours to death following the outbreak of inter-ethnic violence, a genocide in which over 800,000 mainly

Tutsi people were killed between April to July 1994, according to the UN. Today, that water source brings the people back together. But 25 years ago, the tranquil valley, its rich farmland lined with banana, mango and avocado trees about 40 kilometres (25 miles) west of Rwanda’s capital Kigali, became a killing field. Whipped up by extremist propaganda, the people of Giheta -- from the ethnic Hutu majority -- attacked their longtime neighbours in Ruseke from the Tutsi minority. Some 70 people were

massacred. “It was a big shock for us,” said Daphrosa Mukarubayiza, 57, whose husband and son were killed. “These were people who we used to socialise and drink together with. We shared everything.” Elders in the communities spoke of how people would gather to chat as they waited for their water containers to fill, exchanging gossip and news, a peaceful place that brought everyone together. After the genocide, both villages still relied on the water, but took it in turn to avoid having to meet, if at all possible. (afp)