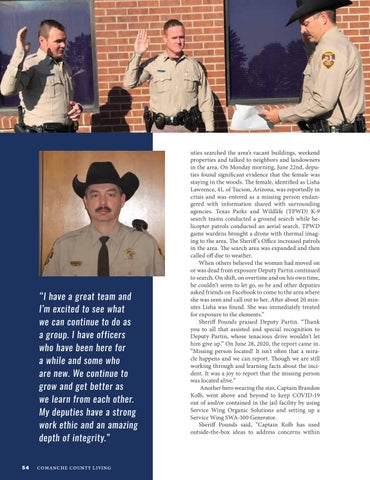 “I have a great team and I’m excited to see what we can continue to do as a group. I have officers who have been here for a while and some who are new. We continue to grow and get better as we learn from each other. My deputies have a strong work ethic and an amazing depth of integrity.” 54

uties searched the area’s vacant buildings, weekend properties and talked to neighbors and landowners in the area. On Monday morning, June 22nd, deputies found significant evidence that the female was staying in the woods. The female, identified as Lisha Lawrence, 41, of Tucson, Arizona, was reportedly in crisis and was entered as a missing person endangered with information shared with surrounding agencies. Texas Parks and Wildlife (TPWD) K-9 search teams conducted a ground search while helicopter patrols conducted an aerial search. TPWD game wardens brought a drone with thermal imaging to the area. The Sheriff’s Office increased patrols in the area. The search area was expanded and then called off due to weather. When others believed the woman had moved on or was dead from exposure Deputy Partin continued to search. On shift, on overtime and on his own time, he couldn’t seem to let go, so he and other deputies asked friends on Facebook to come to the area where she was seen and call out to her. After about 20 minutes Lisha was found. She was immediately treated for exposure to the elements.” Sheriff Pounds praised Deputy Partin. “Thank you to all that assisted and special recognition to Deputy Partin, whose tenacious drive wouldn’t let him give up.” On June 28, 2020, the report came in. “Missing person located! It isn’t often that a miracle happens and we can report. Though we are still working through and learning facts about the incident. It was a joy to report that the missing person was located alive.” Another hero wearing the star, Captain Brandon Kolb, went above and beyond to keep COVID-19 out of and/or contained in the jail facility by using Service Wing Organic Solutions and setting up a Service Wing SWA-300 Generator. Sheriff Pounds said, “Captain Kolb has used outside-the-box ideas to address concerns within