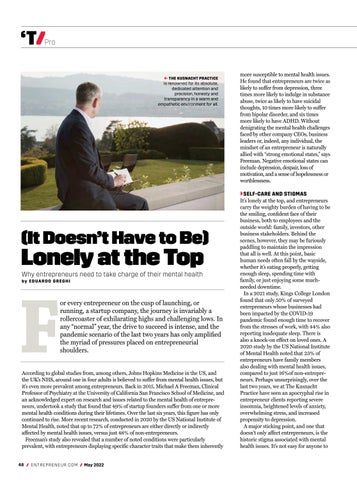 ← THE KUSNACHT PRACTICE is renowned for its absolute, dedicated attention and precision, honesty and transparency in a warm and empathetic environment for all.

more susceptible to mental health issues. He found that entrepreneurs are twice as likely to suffer from depression, three times more likely to indulge in substance abuse, twice as likely to have suicidal thoughts, 10 times more likely to suffer from bipolar disorder, and six times more likely to have ADHD. Without denigrating the mental health challenges faced by other company CEOs, business leaders or, indeed, any individual, the mindset of an entrepreneur is naturally allied with “strong emotional states,” says Freeman. Negative emotional states can include depression, despair, loss of motivation, and a sense of hopelessness or worthlessness.

or every entrepreneur on the cusp of launching, or running, a startup company, the journey is invariably a rollercoaster of exhilarating highs and challenging lows. In any “normal” year, the drive to succeed is intense, and the pandemic scenario of the last two years has only amplified the myriad of pressures placed on entrepreneurial shoulders.

According to global studies from, among others, Johns Hopkins Medicine in the US, and the UK’s NHS, around one in four adults is believed to suffer from mental health issues, but it’s even more prevalent among entrepreneurs. Back in 2015, Michael A Freeman, Clinical Professor of Psychiatry at the University of California San Francisco School of Medicine, and an acknowledged expert on research and issues related to the mental health of entrepreneurs, undertook a study that found that 49% of startup founders suffer from one or more mental health conditions during their lifetimes. Over the last six years, this figure has only continued to rise. More recent research, conducted in 2020 by the US National Institute of Mental Health, noted that up to 72% of entrepreneurs are either directly or indirectly affected by mental health issues, versus just 48% of non-entrepreneurs. Freeman’s study also revealed that a number of noted conditions were particularly prevalent, with entrepreneurs displaying specific character traits that make them inherently

It’s lonely at the top, and entrepreneurs carry the weighty burden of having to be the smiling, confident face of their business, both to employees and the outside world: family, investors, other business stakeholders. Behind the scenes, however, they may be furiously paddling to maintain the impression that all is well. At this point, basic human needs often fall by the wayside, whether it’s eating properly, getting enough sleep, spending time with family, or just enjoying some muchneeded downtime. In a 2021 study, Kings College London found that only 50% of surveyed entrepreneurs whose businesses had been impacted by the COVID-19 pandemic found enough time to recover from the stresses of work, with 44% also reporting inadequate sleep. There is also a knock-on effect on loved ones. A 2020 study by the US National Institute of Mental Health noted that 23% of entrepreneurs have family members also dealing with mental health issues, compared to just 16%of non-entrepreneurs. Perhaps unsurprisingly, over the last two years, we at The Kusnacht Practice have seen an apocryphal rise in entrepreneur clients reporting severe insomnia, heightened levels of anxiety, overwhelming stress, and increased propensity to depression. A major sticking point, and one that doesn’t only affect entrepreneurs, is the historic stigma associated with mental health issues. It’s not easy for anyone to

In the May 2022 issue of Entrepreneur Middle East, we'd like you to meet "Abdallah of Arabia," i.e. Abdallah Abu-Sheikh, the serial entrepreneur behind ventures like Barq, Rizek, and Lux Development Partners who is determined to make his impact felt on the Arab world. Also featured in this issue: Karen Wazen and Elias Bakhazi, the co-founders of KE Partners, artist and philanthropist Sacha Jafri, Izaak Azanei founder Roshni Khemlani Mehta, The Kusnacht Practice CEO Eduardo Greghi, and lots more. 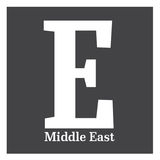