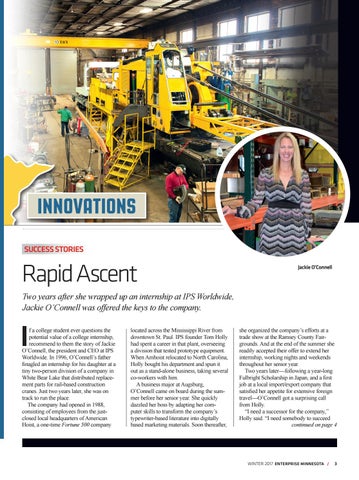 Two years after she wrapped up an internship at IPS Worldwide, Jackie O’Connell was offered the keys to the company.

f a college student ever questions the potential value of a college internship, recommend to them the story of Jackie O’Connell, the president and CEO at IPS Worldwide. In 1996, O’Connell’s father finagled an internship for his daughter at a tiny two-person division of a company in White Bear Lake that distributed replacement parts for rail-based construction cranes. Just two years later, she was on track to run the place. The company had opened in 1988, consisting of employees from the justclosed local headquarters of American Hoist, a one-time Fortune 500 company

located across the Mississippi River from downtown St. Paul. IPS founder Tom Holly had spent a career in that plant, overseeing a division that tested prototype equipment. When Amhoist relocated to North Carolina, Holly bought his department and spun it out as a stand-alone business, taking several co-workers with him. A business major at Augsburg, O’Connell came on board during the summer before her senior year. She quickly dazzled her boss by adapting her computer skills to transform the company’s typewriter-based literature into digitally based marketing materials. Soon thereafter,

she organized the company’s efforts at a trade show at the Ramsey County Fairgrounds. And at the end of the summer she readily accepted their offer to extend her internship, working nights and weekends throughout her senior year. Two years later—following a year-long Fulbright Scholarship in Japan, and a first job at a local import/export company that satisfied her appetite for extensive foreign travel—O’Connell got a surprising call from Holly. “I need a successor for the company,” Holly said. “I need somebody to succeed continued on page 4

No continuous improvement journey will succeed without employee buy-in. Here’s how you get it. 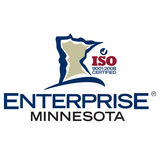