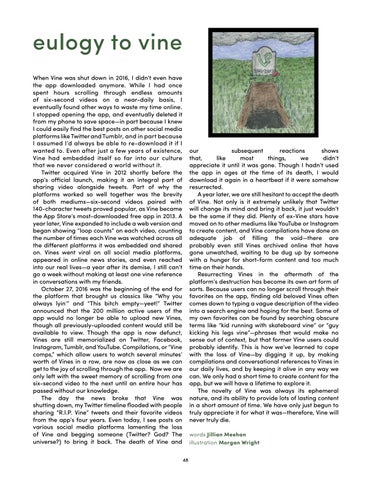 eulogy to vine When Vine was shut down in 2016, I didn’t even have the app downloaded anymore. While I had once spent hours scrolling through endless amounts of six-second videos on a near-daily basis, I eventually found other ways to waste my time online. I stopped opening the app, and eventually deleted it from my phone to save space—in part because I knew I could easily find the best posts on other social media platforms like Twitter and Tumblr, and in part because I assumed I’d always be able to re-download it if I wanted to. Even after just a few years of existence, Vine had embedded itself so far into our culture that we never considered a world without it. Twitter acquired Vine in 2012 shortly before the app’s official launch, making it an integral part of sharing video alongside tweets. Part of why the platforms worked so well together was the brevity of both mediums—six-second videos paired with 140-character tweets proved popular, as Vine became the App Store’s most-downloaded free app in 2013. A year later, Vine expanded to include a web version and began showing “loop counts” on each video, counting the number of times each Vine was watched across all the different platforms it was embedded and shared on. Vines went viral on all social media platforms, appeared in online news stories, and even reached into our real lives—a year after its demise, I still can’t go a week without making at least one vine reference in conversations with my friends. October 27, 2016 was the beginning of the end for the platform that brought us classics like “Why you always lyin’” and “This bitch empty—yeet!” Twitter announced that the 200 million active users of the app would no longer be able to upload new Vines, though all previously-uploaded content would still be available to view. Though the app is now defunct, Vines are still memorialized on Twitter, Facebook, Instagram, Tumblr, and YouTube. Compilations, or “Vine comps,” which allow users to watch several minutes’ worth of Vines in a row, are now as close as we can get to the joy of scrolling through the app. Now we are only left with the sweet memory of scrolling from one six-second video to the next until an entire hour has passed without our knowledge. The day the news broke that Vine was shutting down, my Twitter timeline flooded with people sharing “R.I.P. Vine” tweets and their favorite videos from the app’s four years. Even today, I see posts on various social media platforms lamenting the loss of Vine and begging someone (Twitter? God? The universe?) to bring it back. The death of Vine and

our subsequent reactions shows that, like most things, we didn’t appreciate it until it was gone. Though I hadn’t used the app in ages at the time of its death, I would download it again in a heartbeat if it were somehow resurrected. A year later, we are still hesitant to accept the death of Vine. Not only is it extremely unlikely that Twitter will change its mind and bring it back, it just wouldn’t be the same if they did. Plenty of ex-Vine stars have moved on to other mediums like YouTube or Instagram to create content, and Vine compilations have done an adequate job of filling the void—there are probably even still Vines archived online that have gone unwatched, waiting to be dug up by someone with a hunger for short-form content and too much time on their hands. Resurrecting Vines in the aftermath of the platform’s destruction has become its own art form of sorts. Because users can no longer scroll through their favorites on the app, finding old beloved Vines often comes down to typing a vague description of the video into a search engine and hoping for the best. Some of my own favorites can be found by searching obscure terms like “kid running with skateboard vine” or “guy kicking his legs vine”—phrases that would make no sense out of context, but that former Vine users could probably identify. This is how we’ve learned to cope with the loss of Vine—by digging it up, by making compilations and conversational references to Vines in our daily lives, and by keeping it alive in any way we can. We only had a short time to create content for the app, but we will have a lifetime to explore it. The novelty of Vine was always its ephemeral nature, and its ability to provide lots of lasting content in a short amount of time. We have only just begun to truly appreciate it for what it was—therefore, Vine will never truly die. words Jillian Meehan illustration Morgan Wright 48 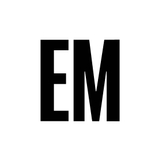