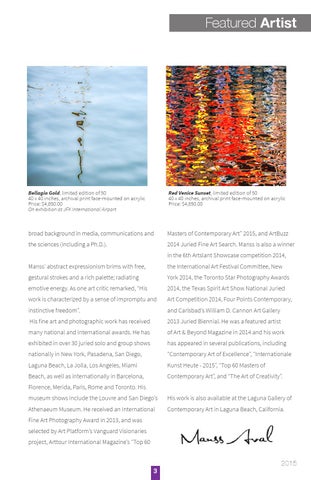 broad background in media, communications and

Masters of Contemporary Art” 2015, and ArtBuzz

the sciences (including a Ph.D.).

emotive energy. As one art critic remarked, “His

work is characterized by a sense of impromptu and

His fine art and photographic work has received

2013 Juried Biennial. He was a featured artist

many national and international awards. He has

exhibited in over 30 juried solo and group shows

has appeared in several publications, including

Beach, as well as internationally in Barcelona,

Contemporary Art”, and “The Art of Creativity”.

museum shows include the Louvre and San Diego’s

His work is also available at the Laguna Gallery of

Athenaeum Museum. He received an International

An annual catalog of fine art published by Embler Art Gallery features artists from around the world. A great resource of fine art for all art enthusiasts and collectors. The Club Collection catalog is distributed in the American Airlines Admirals Club within 3 international airports: MIA- Miami, FL; JFK- New York, NY; and GRU- Sao Paulo, Brazil.