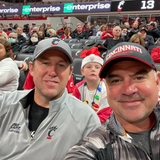 Elliott Allan Hilsinger was born in Cincinnati, Ohio. Hilsinger enrolled and began attending the University of Cincinnati (UC) in the late fall of 1990, following his high school academic excellence and graduation. From 1990 to 1995, he attended UC for five years. Hilsinger obtained his BBA with a marketing specialization from the University of Cincinnati's Carl H. Lindner College of Business in 1995. Hilsinger was active in several campus life activities throughout his time at UC, one of which was following in his father's footsteps and becoming a Sigma Chi. He is now a lifelong member of Sigma Chi, and he and his family have given back to the fraternity in a variety of ways every year for decades.