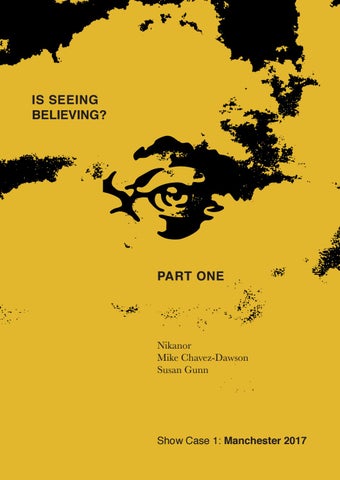 Is Seeing Believing? Part One

“I was drawing people’s attention to the fact that art is a mirage. A mirage, exactly like an oasis appears in the desert. It is very beautiful until, of course, you are dying of thirst.” - Marcel Duchamp, Paris-Express, 1964

Is seeing believing? Are you dying of thirst?

Is Seeing Believing? Part One It’s worth remembering that Marcel Duchamp produced a ‘fountain’ that wasn’t plumbed in - his Fountain (1917; 1964) was an empty, upended urinal that the Society of Independent Artists broke its constitution in order to reject for exhibition1. Duchamp’s point, with what he created and what he said, was that perception is shaped by context; it is context that determines whether something appears beautiful or tortuous, as art or indecency. The point of Is Seeing Believing? at Saul Hay Gallery - in which a liquid chalk drawing of Duchamp’s eyes looks back at visitors from one wall - is that both the how and the who of an observation is worth questioning.

Created by Manchester-based artist Mike Chavez-Dawson ‘Letter Box (To the Right, Duchamp’s Eyes)’ can be seen as a piece that encapsulates the observational interplay in Is Seeing Believing? - between the three artists involved and the works on show. The result is an exhibition in which signification evolves under the gaze of its audience. Because although it has been drawn onto a chalkboard, ‘Letter Box (To the Right, Duchamp’s Eyes)’ is, in many different ways, a reflection: of Duchamp’s gaze, of a decision by fellow exhibitor Nikanor to develop his practice by isolating the eyes in the cut outs for which he has gained reputation and, consequently, of several other pairs of eyes in the exhibition.

‘The society’s board of directors, who were bound by the Society’s constitution to accept all members’ submissions, took exception to Fountain, believing that a piece of sanitary ware – and one associated with bodily waste – could not be considered a work of art and furthermore was indecent’ - http://www.tate.org.uk/art/artworks/duchamp-fountain-t07573, accessed 16 October 2017

Reflection here, then, is not simply imitation - it’s a route to reflection. Chavez-Dawson’s ‘Letter Box (To the Right, Duchamp’s Eyes)’ and Nikanor’s ‘Sight of the Sage (Rabbi Eyes – Chasam Sofer), 2017’ to ‘The Poets Gaze (Cohen’s Stare), 2017’ reflect upon each other as well as gazing out at the work of Susan Gunn, whose non-figurative canvasses themselves invite consideration by their contrasting absence of imagery, their mysteriously fractured terrain. However, Chavez-Dawson and Nikanor’s works look different, and look differently: ‘The Performer’s Look (The King, Elvis), 2017’ by Nikanor may take shape from polished brass, which refracts the world it faces - but the eyes in the image are those of a man well-documented as having poor eyesight in his lifetime. ChavezDawson, meanwhile, has chosen to evoke Duchamp - whose legacy is one of continual reinterpretation, and whose most famous work has uncertain origins - in liquid chalk. Looked at over time, this material will be subject to shifts and disappearances, as though both the man and his outlook were mercurial.

Is Seeing Believing? Part One

What is revealed by this? Perhaps that, while Chavez-Dawson has described the ocular focus of his and Nikanor’s work in Is Seeing Believing? as being concerned with universality (the idea that by abstracting the eyes from the face they become a feature, and yet also featureless; more difficult to identify), the interaction between the works in this exhibition also evidences the fact that gaze is a thing as tailored as an iris, as adaptable as an individual. This idea is also borne out by the artists who appear through these works. Gunn, who encourages the interpretation of her work to be metaphorical or “philosophical” rather than literal or autobiographical, nonetheless evokes Oscar Wilde’s assertion that “every portrait that is painted with feeling is a portrait of the artist, not of the sitter. The sitter is merely the accident, the occasion.” Gunn does not paint portraits (and has no sitter) but she does, she admits, reveal herself through practice: the cracks in Divided Ground: Lamp Black (2015) and Divided Ground: Bombay Orange (2015) are purposeful accidents. The surfaces are provoked to breaking point, but just about holding together. How, then, to look at them, at her? As contradictory, certainly - but richly so.

It seems that Duchamp’s mirage applies to both art and artist - as Chavez-Dawson epitomises in See Horse, Self-Portrait, Refracted Narcissist (2012-2017). ‘Narcissism’ here is declared and yet simultaneously mitigated by being so, as well as by the artist’s unflattering representation of himself in misalignment, his face - in what appears to be water - echoing equine form. However it is Nikanor - despite being the focus of OmMaNoot, the art agency behind the show - who is the most elusive contributor of all. He is without internet presence, barely known outside Israel; even his face has disappeared from the reflective surfaces of his works. Nevertheless, the name ‘Nikanor’, his artist persona, itself evokes a story of faith. In a pre-Biblical myth, Nikanor travelled with two gates through a sea storm; one was sacrificed to the waves to save the ship, the loss of it greatly mourned. When Nikanor reached land, however, the lost gate was found attached to the bottom of the boat, and reclaimed.

So, is seeing believing? Are you dying at sea? This is, of course, just one way of looking at it.

07 Nikanor is the artist name of an off-line Jerusalem based designer turned contemporary artist. Over the last three years his inner-circle of supporters have expanded from his locality to including a Manchester based patron and supporter, 'Is Seeing Believing? Part One, sees him build new body of work upon his recent works - these works have stemmed from dialogue with Manchester based artist curator Mike Chavez-Dawson, Nikanor has recently finished working on a short film with Tel Aviv artist Yoav Ruda.

Innocent Child, A Gaze From Above, A View From Within, 2017 Inset

Innocent Child, A Gaze From Above, A View From Within, 2017 Single cut

â&#x20AC;&#x153;As a conceptually-driven artist I tend to present propositional works that are multi-part and interdisciplinary, I employ a dynamic that is critically engaged yet playfully intuitive, this is usually via a kaleidoscopic approach that seeks to formulate an intelligent yet poetic dialogue between the modes of its production, the work produced and its potential reading/consumption."

Mike Chavez-Dawson is an artist-curator based at Rogue Artists’ Studios, Manchester, UK. He was longlisted for the Solo Award 2017, a shortlisted artist for the GM Art Prize 2016, comissioned artist for Fountain 17 as part of Hull Capital of Culture 2017, Open Submission Winner for the 2013 Emergency Arts festival, selected for the Open 100 proposals for Artangel’s ‘OPEN’ 2013 and the Open Submission Winner for the 2008 Whitstable Biennale.

“Thematically I’m drawn to mental fragility/stability, the esoteric, belief systems, and increasingly the legacy of art; its function and relevance.”

Gunn gained international recognition when she won the Sovereign European Art prize in 2006. She achieved a First Class Honours degree at Norwich University of the Arts and was selected for an Arts Council Escalator award, facilitated by Commissions East and supported by Arts Council England during which she was mentored by the renowned artist, Callum Innes. Shortlisted for the Greater Manchester Art Prize 2016, she was a prize winner in 2017.

Gunn has exhibited widely and featured in a number of solo and group exhibitions at venues including Norwich Castle Museum & Art Gallery, the Komechack Gallery Chicago, NUA East Gallery, and The Fine Art Society, London. In 2015 Gunn was commissioned to create a 20 metre painting installation for the Enterprise Centre at the University of East Anglia.

She is based at Artwork Atelier and a member of Castlefield Gallery Associates. Gunn sits on the advisory board of Contemporary British Painting and is currently included in an international touring exhibition, Contemporary Masters From Britain touring museums in China.

Forthcoming exhibitions include Is Seeing believing? Part One with Saul Hay Gallery and Natures Alchemy at BoLee Gallery, London; alongside Richard Long and Cornelia Parker.

Om Ma Noot Invites You To: Is seeing believing? Part One

Is seeing believing? Part One