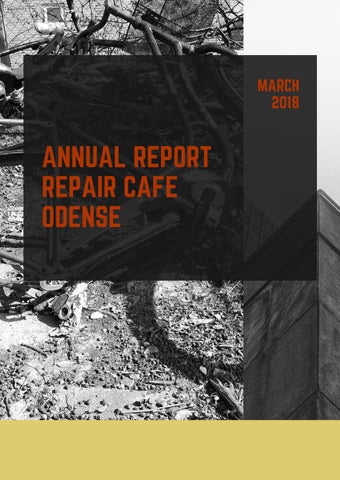 WHO ARE WE? Repair Café Odense was founded in 2016 by a group of enthusiasts seeking to make a change in our “throw-away” culture, to introduce the local community to a more sustainable, and circular thinking mindset. The group consists of people from different professional backgrounds, ages, and nationalities.

OUR MISSION Repair Café Odense envisions a world where resources are produced and consumed wisely. Our mission is to drive change in consumer behaviour to reduce waste and promote a more sustainable lifestyle. We operate with four key values: Community, Sustainability, Openness and Education

ABOUT REPORT This report covers Repair Cafe´s activities from March 2017March 2018. Besides transparency, our approach to reporting is to educate and inspire. This report also represents our policy towards

SOCIAL PERFORMANCE Social media engagement Collaboration with other organisations Public awareness Our second event was covered by a national TV station and we were interviewed for the “inspiration” segment of the prime-time news on the TV2 channel. Recently, our story was covered by the Dutch public service broadcaster NOS.nl.

WITH HELP FROM THE CITY MAYOR, THE LOCAL NEWSPAPERS COVERED OUR STORY AFTER THE FIRST EVENT. THE SOCIAL IMPACTS ON OUR LOCAL COMMUNITY GROW WITH EVERY EVENT HELD

different locations throughout the year. The locations for events are donated and free of charge. For the previous year, we hosted events at Storm pakhus, Cortex lab, TEK (SDU), Vollsmose Torv, Studenthus and Friskolen City Odense. Additionally, we collaborated with Swithclook, the start-up company for textile recycling.

During 11 events, more than 200 people visited us Repair Cafe Ě s events became a social and educational platform for meeting new people and gaining new skills More than 30 volunteers helped to fix items in the previous year Events are held in an international environment

FOR THE PREVIOUS YEAR, WE RECIEVED 227 VARIOUS ITEMS WITH THE SUCCESS RATE OF 84% The core idea of Repair Cafe Odense is to prevent creating unnecessary waste and educating our community. During the events, everyone has the opportunity to learn how to repair the broken goods with the help of our volunteers. We received 227 items to fix and prevented 1.4 tons of potential waste! *CO2 calculation is based on estimation from research organisation ´TNO Innovation for life´, which has calculated that collecting and re-using per kilo goods in repair shops equals kilo of saved CO2 ** all results are estimated and based on data gathered during our workshops (in case of no data, assumptions were used)

Most of the items brought during our events were bicycles, electronic appliances, clothes and furniture Transportation vehicles (bicycles, baby strollers) are the biggest group, followed by small electronics devices Textile is the group with the 90% of repair success rate!

FINANCIAL PERFORMANCES The Repair Café is a non-profit organisation that depends only on donations from customers. At the end of the 2017 year, internal costs were higher than donations. Events at the beginning of 2018 were very successful, and most of the donations were collected at that time Locations for the events were free of charge and in some cases, food for volunteers was donated as well During 11 events, we spent 330 hours of volunteering work and saved potentially 30.000 DKK

SUSTAINABILITY Today, a lot of waste is produced that could be refurbished and reused. Municipal waste contributes to a large extent of waste products coming from households - it describes consumers habits and

lifestyle. Consumption habits has been passed down from

generation to generation. It is

among young adults, whose

behaviour will have the most

significant impact on the

production and consumption in the future.

FUTURE The Repair Café was initiated by Martine Postma. Since 2007, she has been striving for sustainability at a local level in many ways. Martine organised the very first Repair Café in Amsterdam, on October 18, 2009. It was a great success. This prompted Martine to start the Repair Café Foundation. Since 2011, this non-profit organisation has provided professional support to local groups in the Netherlands and other countries wishing to start their own Repair Café At the moment, there are 1500 local Repair Cafes´s in the world!

REPAIR CAFE ODENSE Keshav (right), an environmental engineer and a researcher on Circular Economy’ at the University of Southern Denmark, came up with the proposal of starting the Café. For one year, Keshav was the president of Repair Cafe Odnese and now he is heading towards new challenges in his career. Our new president is Dylan Cawthorne (left), mechanical engineer and PhD student at the University of Southern Denmark. .

Birthe (the Treasurer), the teacher with a strong passion for sustainability, helped to implement the idea from the beginning. She is still active and valuable member of our team!

OF INDIVIDUALS AND INFLUENCE DECISION MAKERS TOWARDS A SUSTAINABLE FUTURE

EDUCATIONAL Our future goals are directed towards policymakers to implement the laws and regulations in order to stop the “throw-away” culture. A good example is Sweden; in 2016, the government introduced tax breaks on repairs! In organising the Repair Café Odense events, our wish is to inspire, educate people on how to expand the lifetime of a product, and be more critical towards brands they buy and support.

EDUCATE, INSPIRE, BE A PART OF IT! Reference: https://www.theguardian.com/world/2016/sep/19/waste-not-want-not-sweden-tax-breaks-repairs

...A WORD FROM THE FOUNDER One evening of late 2016, I was scrolling through my LinkedIn feed when I first learned about the initiative &quot;Repair Café International&quot;. To me – as a researcher in waste management and circular economy – the concept was nothing but fantastic. “Why aren’t we doing this in Odense?” I asked myself. Next morning, I asked Birthe and a few other colleagues from SDU the same question.

Soon we had a team behind Repair Café Odense. And a location for our first event planned for 18 March 2017. It was less than 2 weeks from the deadline of my PhD thesis. I had write, but it was more fun to work on the promotion of the first Café. Along with the excitement, there were many uncertainties – at least in my mind. But once the café opened at 11:00, we started seeing that people had in fact noticed our initiative. Sometimes I think I might have contributed more to the society through Repair Café Odense than through my PhD research. If not me, someone else would have eventually come up with this initiative. I feel privileged that I happened to be the one who took the first step. But the credit goes to all the enthusiasts seeking to make a change in our &quot;throw-away&quot; culture. Our team of volunteers, interns, friends, colleagues, hosts, press, helping hands, and participants of our events. Thank you everyone for being part of this initiative.

THANK YOU! ANY QUESTIONS?

Repair Café Odense was founded in 2016 by a group of enthusiasts seeking to make a change! During this year we: *Saved 1.4 Mt of CO2 by fixing 89 bicycles & Repair/Upcycle 400 kg of clothing and textiles *Organise 11 events with more than 200 visitors in 8 locations *Donated 330 hours of volunteer work Read our Annual Environmental Report to learn more! Maybe your city or neighbourhood needs a Repair Cafe, too! 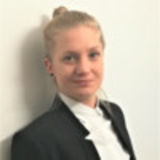