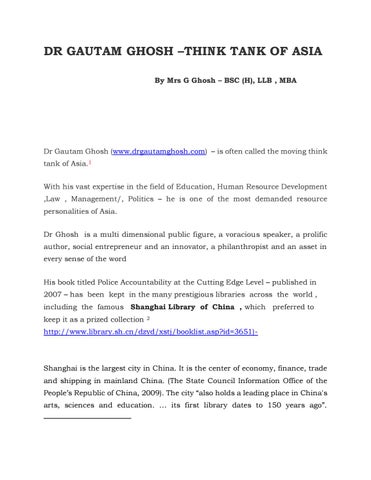 Dr Gautam Ghosh (www.drgautamghosh.com) – is often called the moving think tank of Asia.1 With his vast expertise in the field of Education, Human Resource Development ,Law , Management/, Politics – he is one of the most demanded resource personalities of Asia. Dr Ghosh is a multi dimensional public figure, a voracious speaker, a prolific author, social entrepreneur and an innovator, a philanthropist and an asset in every sense of the word His book titled Police Accountability at the Cutting Edge Level – published in 2007 – has been kept in the many prestigious libraries across the world , including the famous Shanghai Library of China , which preferred to keep it as a prized collection

Shanghai is the largest city in China. It is the center of economy, finance, trade and shipping in mainland China. (The State Council Information Office of the People’s Republic of China, 2009). The city “also holds a leading place in China's arts, sciences and education. … its first library dates to 150 years ago”.

A library is a curated collection of sources of information and similar resources, selected by experts and made accessible to a defined community for reference or borrowing. It provides physical or digital access to material, and may be a physical location or a virtual space, or both.4 Getting a space in the book shelf of Shanghai library is no mean task , - The Shanghai Library (Institute of Scientific and Technical Information of Shanghai) is a national postdoctoral research center, the Ministry of Culture and Tourism Research Center for Public Culture Affairs, the branch of the National Cultural Information Resource Sharing Project in Shanghai, the Shanghai Historical Collection Preservation and Conservation Center, the main library of the Shanghai Central Library System, the "Cutting-edge Technology Development Research Center" of the Shanghai soft science research base, and the Information Center of Shanghai Cultural Creative Industry and each book is kept after conducting a thorough selection process by experts of highest degree

While, today, Police oversight and accountability are hotly debated issues; (5) more than a decade back , in 2007, Dr Ghosh has visualized this and have chronologically analyzed the requirements of Police accountability in his book , the Chinese Scholars must have visualized the potentialities of Dr Ghosh a decade back and have aptly decided to keep his book in their famous library .

Beneath the shining economic development in a seemingly harmonious society, China’s social control apparatus, particularly its police forces, is experiencing a crisis of legitimacy and trustworthiness. The Lei case

sources and consequences of public discontent with the police. Notwithstanding three decades of the rule of law campaign and successive waves of police reforms, China’s domestic policing has frequently run counter to such internationally accepted principles as fairness, accountability, transparency, and human rights. The government’s obsession with stability maintenance and heavy reliance on the police to reach that goal, coupled with an absence of checks and balances, have made the police extremely prone to abusive, even illegal, behaviour. Recent research on Chinese evaluations of police trustworthiness has revealed several interesting findings regarding factors affecting public trust and image7 . Aware of the detrimental impact of low police legitimacy and public trust, the government has rolled out a number of measures, such as requiring video recording of criminal interrogation and police interaction with the public, to enhance police integrity and accountability. Most strikingly, way back in 2007 , , Dr Ghosh

have pointed out that Civilian

oversight has two important aims: ensuring public confidence in the police and achieving the rule of law. Public confidence in a police service helps the police service maintain public safety. The rule of law is also important because it’ is fundamental to good governance As an expert ,on Policing , Dr Ghosh in his book , have precisely explained both the civilian-led oversight mechanisms.

as well as of the mechanism

Executive vis a vis the

Parliamentary oversight of the police which embodies the ultimate democratic

legitimacy as the Parliament exercise legislative, budgetary and monitoring functions before, during and after police actions. The book is unique as it has put forth the importance of leveraging good police public relation which not only enhances the

legitimacy and trustworthiness and but also acts an essential tool of maintaining Police Accountability â&#x20AC;&#x201C; In fact , Dr Ghoshâ&#x20AC;&#x2122;s idea of Public Participative Policing model (PPP- Model ) is today - a role model for an accountable police service across the world . Getting a space in a Major Chinese library is no mean task , especially when the iron curtains are too air tight in matters of Policing & Hu...

Getting a space in a Major Chinese library is no mean task , especially when the iron curtains are too air tight in matters of Policing & Hu...