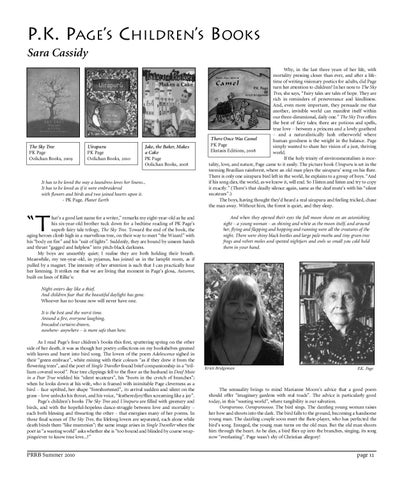 hat’s a good last name for a writer,” remarks my eight-year-old as he and his six-year-old brother tuck down for a bedtime reading of PK Page’s superb fairy tale trilogy, The Sky Tree. Toward the end of the book, the aging heroes climb high in a marvellous tree, on their way to meet “the Wizard” with his “body on fire” and his “suit of lights”. Suddenly, they are bound by unseen hands and thrust “gagged and helpless” into pitch-black darkness. My boys are unearthly quiet; I realise they are both holding their breath. Meanwhile, my ten-year-old, in pyjamas, has joined us in the lamplit room, as if pulled by a magnet. The intensity of her attention is such that I can practically hear her listening. It strikes me that we are living that moment in Page’s glosa, Autumn, built on lines of Rilke’s:

Why, in the last three years of her life, with mortality pressing closer than ever, and after a lifetime of writing visionary poetics for adults, did Page turn her attention to children? In her note to The Sky Tree, she says, “Fairy tales are tales of hope. They are rich in reminders of perseverance and kindliness. And, even more important, they persuade me that another, invisible world can manifest itself within our three-dimenional, daily one.” The Sky Tree offers the best of fairy tales; there are potions and spells, true love – between a princess and a lowly goatherd – and a naturalistically lush otherworld where There Once Was Camel human goodness is the weight in the balance. Page PK Page simply wanted to share her vision of a just, thriving Ekstasis Editions,  world. If the holy trinity of environmentalism is mortality, love, and nature, Page came to it easily. The picture book Uirapuru is set in the teeming Brazilian rainforest, where an old man plays the uirapuru’ song on his flute. There is only one uirapuru bird left in the world, he explains to a group of boys. “And if his song dies, the world, as we know it, will end. So I listen and listen and try to copy it exactly.” (There’s that deadly silence again, same as the deaf mute’s with his “silent secateurs”.) The boys, having thought they’d heard a real uirapuru and feeling tricked, chase the man away. Without him, the forest is quiet, and they sleep. And when they opened their eyes the full moon shone on an astonishing sight – a young woman – as shining and white as the moon itself, and around her, flying and flapping and hopping and running were all the creatures of the night. There were shiny black beetles and large pale moths and tiny green tree frogs and velvet moles and spotted nightjars and owls so small you cold hold them in your hand.

Night enters day like a thief. And children fear that the beautiful daylight has gone. Whoever has no house now will never have one. It is the best and the worst time. Around a fire, everyone laughing, brocaded curtains drawn, nowhere- anywhere – is more safe than here. As I read Page’s four chidren’s books this first, sputtering spring on the other side of her death, it was as though her poetry collections on my bookshelves greened with leaves and burst into bird song. The lovers of the poem Adolescence sighed in their “green embrace”, white mixing with their colours “as if they drew it from the flowering trees”, and the poet of Single Traveller found brief companionship in a “trillium covered wood”. Pear tree clippings fell to the floor as the husband in Deaf Mute in a Pear True wielded his “silent secateurs”, his “boots in the crotch of branches”; when he looks down at his wife, who is framed with inimitable Page cleverness as a bird – face uptilted, her shape “foreshortened”, its arrival sudden and silent on the grass – love unlocks his throat, and his voice, “featheredjoy/flies screaming like a jay”. Page’s children’s books The Sky Tree and Uirapuru are filled with greenery and birds, and with the hopeful-hopeless dance-struggle between love and mortality – each both blessing and thwarting the other – that energises many of her poems. In those final scenes of The Sky Tree, the lifelong lovers are separated, each alone while death binds them “like mummies”; the same image arises in Single Traveller when the poet in “a wasting world” asks whether she is “too bound and blinded by coarse wrappings/ever to know true love...?”

The sensuality brings to mind Marianne Moore’s advice that a good poem should offer “imaginary gardens with real toads”. The advice is particularly good today, in this “wasting world”, where tangibility is our salvation. Oorapurooo. Oorapurooooo. The bird sings. The dazzling young woman raises her bow and shoots into the dark. The bird falls to the ground, becoming a handsome young man. The dazzling couple soon meet the flute-player, who has perfected the bird’s song. Enraged, the young man turns on the old man. But the old man shoots him through the heart. As he dies, a bird flies up into the branches, singing, its song now “everlasting”. Page wasn’t shy of Christian allegory! The Pacific Rim Review of Books

The Pacific Rim Review of Books