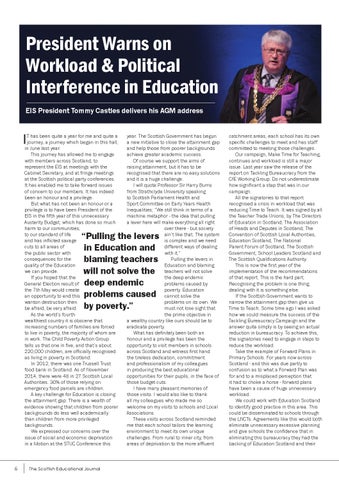 T has been quite a year for me and quite a journey, a journey which began in this hall, in June last year. This journey has allowed me to engage with members across Scotland, to represent the EIS at meetings with the Cabinet Secretary, and at fringe meetings at the Scottish political party conferences. It has enabled me to take forward issues of concern to our members. It has indeed been an honour and a privilege. But what has not been an honour or a privilege is to have been President of the EIS in the fifth year of this unnecessary Austerity Budget, which has done so much harm to our communities, to our standard of life and has inflicted savage cuts to all areas of the public sector with consequences for the quality of the Education we can provide. If you hoped that the General Election result of the 7th May would create an opportunity to end this wanton destruction then be afraid, be very afraid. As the world’s fourth wealthiest country it is obscene that increasing numbers of families are forced to live in poverty, the majority of whom are in work. The Child Poverty Action Group tells us that one in five, and that’s about 220,000 children, are officially recognised as living in poverty in Scotland. In 2012, there was one Trussell Trust food bank in Scotland. As of November 2014, there were 48 in 27 Scottish Local Authorities. 30% of those relying on emergency food parcels are children. A key challenge for Education is closing the attainment gap. There is a wealth of evidence showing that children from poorer backgrounds do less well academically than children from more privileged backgrounds. We expressed our concerns over the issue of social and economic deprivation in a Motion at the STUC Conference this

year. The Scottish Government has begun a new initiative to close the attainment gap and help those from poorer backgrounds achieve greater academic success. Of course we support the aims of raising attainment, but it has to be recognised that there are no easy solutions and it is a huge challenge. I will quote Professor Sir Harry Burns from Strathclyde University speaking to Scottish Parliament Health and Sport Committee on Early Years Health Inequalities; “We still think in terms of a machine metaphor - the idea that pulling a lever here will make everything all right over there - but society ain’t like that. The system is complex and we need different ways of dealing with it.” Pulling the levers in Education and blaming teachers will not solve the deep endemic problems caused by poverty. Education cannot solve the problems on its own. We must not lose sight that the prime objective in a wealthy country like ours should be to eradicate poverty. What has definitely been both an honour and a privilege has been the opportunity to visit members in schools across Scotland and witness first hand the tireless dedication, commitment and professionalism of my colleagues in producing the best educational opportunities for their pupils, in the face of those budget cuts. I have many pleasant memories of those visits. I would also like to thank all my colleagues who made me so welcome on my visits to schools and Local Associations. These visits across Scotland reminded me that each school tailors the learning environment to meet its own unique challenges. From rural to inner city, from areas of deprivation to the more affluent

“Pulling the levers in Education and blaming teachers will not solve the deep endemic problems caused by poverty.”

catchment areas, each school has its own specific challenges to meet and has staff committed to meeting those challenges. Our campaign, Make Time for Teaching, continues and workload is still a major issue. Last year saw the release of the report on Tackling Bureaucracy from the CfE Working Group. Do not underestimate how significant a step that was in our campaign. All the signatories to that report recognised a crisis in workload that was reducing Time to Teach. It was signed by all the Teacher Trade Unions, by The Directors of Education in Scotland, The Association of Heads and Deputes in Scotland, The Convention of Scottish Local Authorities, Education Scotland, The National Parent Forum of Scotland, The Scottish Government, School Leaders Scotland and The Scottish Qualifications Authority. This is now the first year of the implementation of the recommendations of that report. This is the hard part. Recognising the problem is one thing, dealing with it is something else. If the Scottish Government wants to narrow the attainment gap then give us Time to Teach. Some time ago I was asked how we could measure the success of the Tackling Bureaucracy Campaign and the answer quite simply is by seeing an actual reduction in bureaucracy. To achieve this, the signatories need to engage in steps to reduce the workload. Take the example of Forward Plans in Primary Schools. For years now across Scotland - and this was due partly to confusion as to what a Forward Plan was for and to a misplaced perception that it had to choke a horse - forward plans have been a cause of huge unnecessary workload. We could work with Education Scotland to identify good practice in this area. This could be disseminated to schools through the LNCTs. Agreements like this would both eliminate unnecessary excessive planning and give schools the confidence that in eliminating this bureaucracy they had the backing of Education Scotland and their