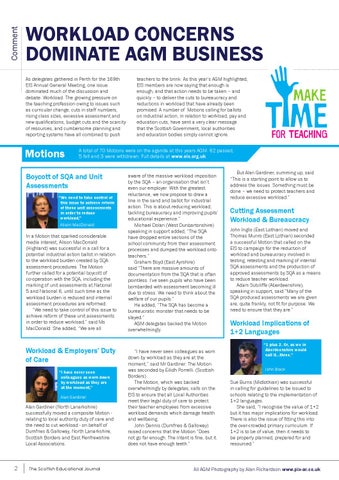 WORKLOAD CONCERNS DOMINATE AGM BUSINESS As delegates gathered in Perth for the 169th EIS Annual General Meeting, one issue dominated much of the discussion and debate: Workload. The growing pressure on the teaching profession owing to issues such as curricular change, cuts in staff numbers, rising class sizes, excessive assessment and new qualifications, budget cuts and the scarcity of resources, and cumbersome planning and reporting systems have all combined to push

A total of 70 Motions were on the agenda at this years AGM. 62 passed, 5 fell and 3 were withdrawn. Full details at www.eis.org.uk

Boycott of SQA and Unit Assessments “We need to take control of this issue to achieve reform of these unit assessments in order to reduce workload,” Alison MacDonald

In a Motion that sparked considerable media interest, Alison MacDonald (Highland) was successful in a call for a potential industrial action ballot in relation to the workload burden created by SQA assessment procedures. The Motion further called for a potential boycott of co-operation with the SQA, including the marking of unit assessments at National 5 and National 6, until such time as the workload burden is reduced and internal assessment procedures are reformed. “We need to take control of this issue to achieve reform of these unit assessments in order to reduce workload,” said Ms MacDonald. She added, “We are all

Workload & Employers’ Duty of Care “I have never seen colleagues as worn down by workload as they are at the moment,” Alan Gardiner

teachers to the brink. As this year’s AGM highlighted, EIS members are now saying that enough is enough, and that action needs to be taken – and quickly – to deliver the cuts to bureaucracy and reductions in workload that have already been promised. A number of Motions calling for ballots on industrial action, in relation to workload, pay and education cuts, have sent a very clear message that the Scottish Government, local authorities and education bodies simply cannot ignore.

aware of the massive workload imposition by the SQA – an organisation that isn’t even our employer. With the greatest reluctance, we now propose to draw a line in the sand and ballot for industrial action. This is about reducing workload, tackling bureaucracy and improving pupils’ educational experience.” Michael Dolan (West Dunbartonshire) speaking in support added, “The SQA have dropped entire sections of the school community from their assessment processes and dumped the workload onto teachers.” Graham Boyd (East Ayrshire) said “There are massive amounts of documentation from the SQA that is often pointless. I’ve seen pupils who have been bombarded with assessment becoming ill due to stress. We need to think about the welfare of our pupils.” He added, “The SQA has become a bureaucratic monster that needs to be slayed.” AGM delegates backed the Motion overwhelmingly.

“I have never seen colleagues as worn down by workload as they are at the moment,” said Mr Gardiner. The Motion was seconded by Eilidh Porrelli. (Scottish Borders) The Motion, which was backed overwhelmingly by delegates, calls on the EIS to ensure that all Local Authorities meet their legal duty of care to protect their teacher employees from excessive workload demands which damage health and wellbeing. John Dennis (Dumfries & Galloway) raised concerns that the Motion “Does not go far enough. The intent is fine, but it does not have enough teeth.”

But Alan Gardiner, summing up, said “This is a starting point to allow us to address the issues. Something must be done – we need to protect teachers and reduce excessive workload.”

Cutting Assessment Workload & Bureaucracy John Inglis (East Lothian) moved and Thomas Munro (East Lothian) seconded a successful Motion that called on the EIS to campaign for the reduction of workload and bureaucracy involved in testing, retesting and marking of internal SQA assessments and the production of approved assessments by SQA as a means to reduce teacher workload. Adam Sutcliffe (Aberdeenshire), speaking in support, said “Many of the SQA produced assessments we are given are, quite frankly, not fit for purpose. We need to ensure that they are.”

Workload Implications of 1+2 Languages “1 plus 2. Or, as we in Aberdeenshire would call it…three.” John Black

Sue Burns (Midlothian) was successful in calling for guidelines to be issued to schools relating to the implementation of 1+2 languages. She said, “I recognise the value of 1+2 but it has major implications for workload. There is also the issue of fitting this into the over-crowded primary curriculum. If 1+2 is to be of value, then it needs to be properly planned, prepared for and resourced.”