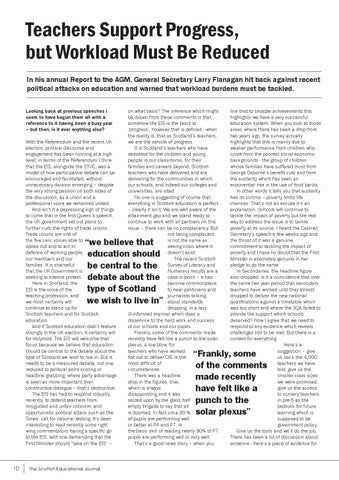 Teachers Support Progress, but Workload Must Be Reduced In his annual Report to the AGM, General Secretary Larry Flanagan hit back against recent political attacks on education and warned that workload burdens must be tackled. Looking back at previous speeches I seem to have begun them all with a reference to it having been a busy year – but then, is it ever anything else? With the Referendum and the recent UK election, political discourse and engagement has been running at a high level; in terms of the Referendum I think that the EIS, alongside the STUC, was a model of how participative debate can be encouraged and facilitated, without unnecessary division emerging – despite the very strong passion on both sides of the discussion, as a union and a professional voice we remained united. And isn’t it a depressing sign of things to come that in the first Queen’s speech, the UK government set out plans to further curb the rights of trade unions. Trade unions are one of the few civic voices able to speak out and to act in defence of working people, our members and our families. It is shameful that the UK Government is seeking to silence protest. Here in Scotland, the EIS is the voice of the teaching profession, and we most certainly will continue to stand up for Scottish teachers and for Scottish education. And if Scottish education didn’t feature strongly in the UK election, it certainly will for Holyrood. The EIS will welcome that focus because we believe that education should be central to the debate about the type of Scotland we wish to live in. But it needs to be a measured debate, not one reduced to political point scoring or headline grabbing, where party advantage is seen as more important than constructive dialogue – that’s destructive. The EIS has had to respond robustly, recently, to defend teachers from misguided and unfair criticism, and opportunistic political attack such as the Tories’ call for national testing. It’s been interesting to read recently some right wing commentators having a specific go at the EIS, with one demanding that the First Minister should “take on the EIS” –

on what basis? The inference which might be drawn from these comments is that somehow the EIS is the block to ‘progress’, however that is defined - when the reality is, that as Scotland’s teachers, we are the vehicle of progress. It is Scotland’s teachers who have delivered for the children and young people in our classrooms, for their families and careers beyond, Scottish teachers who have delivered and are delivering for the communities in which our schools, and indeed our colleges and universities, are sited. No one is suggesting of course that everything in Scottish education is perfect – clearly it isn’t. We are well aware of the attainment gap and we stand ready to continue to work with all partners on this issue – there can be no complacency. But not being complacent is not the same as seeing crisis where it doesn’t exist. The recent Scottish Survey of Literacy and Numeracy results are a case in point – it has become commonplace to hear politicians and journalists talking about standards dropping, in a lazy ill-informed manner which does a disservice to the hard work and success of our schools and our pupils. Frankly, some of the comments made recently have felt like a punch to the solar plexus, a low blow, for teachers who have worked flat out to deliver CfE in the most difficult of circumstances. There was a headline drop in the figures, true, which is always disappointing and it was seized upon by the glass half empty brigade to say that all is doomed. In fact circa 80 % of pupils are performing well or better at P4 and P7; in the basic skill of reading nearly 90% of P7 pupils are performing well or very well. That’s a good news story – when you

link that to broader achievements this highlights we have a very successful education system. When you look at those areas where there has been a drop from two years ago, the survey actually highlights that this is mainly due to weaker performance from children who come from the poorest social economic backgrounds - the group of children whose families have suffered most from George Osborne’s benefit cuts and from the austerity which has seen an exponential rise in the use of food banks. In other words it tells you that austerity has its victims – poverty limits life chances. That’s not an excuse it’s an explanation. Schools will continue to tackle the impact of poverty but the real way to address the issue is to tackle poverty at its source. I heard the Cabinet Secretary’s speech a few weeks ago and the thrust of it was a genuine commitment to tackling the impact of poverty and I have no doubt that the First Minister is absolutely genuine in her pledge to do the same. In Secondaries, the headline figure also dropped. Is it a coincidence that over the same two year period that secondary teachers have worked until they almost dropped to deliver the new national qualifications against a timetable which was too short and where the SQA failed to provide the support which schools deserved? Now I agree that we need to respond to any evidence which reveals challenges still to be met. But there is a context for everything. Here’s a suggestion – give us back the 4,000 teachers we have lost; give us the smaller class sizes we were promised; give us the access to nursery teachers in pre-5 as the bedrock for future learning which is supposed to be government policy. Give us the tools and we’ll do the job. There has been a lot of discussion about evidence - here’s a piece of evidence for

“Frankly, some of the comments made recently have felt like a punch to the solar plexus”