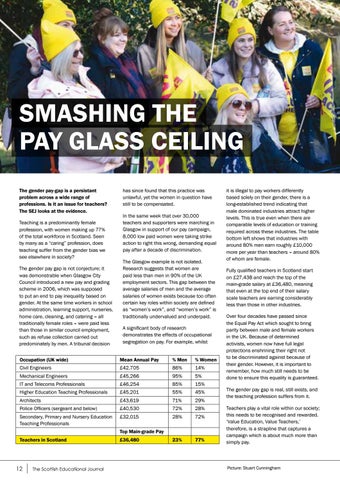 SMASHING THE PAY GLASS CEILING The gender pay-gap is a persistant problem across a wide range of professions. Is it an issue for teachers? The SEJ looks at the evidence. Teaching is a predominantly female profession, with women making up 77% of the total workforce in Scotland. Seen by many as a “caring” profession, does teaching suffer from the gender bias we see elsewhere in society? The gender pay gap is not conjecture; it was demonstrable when Glasgow City Council introduced a new pay and grading scheme in 2006, which was supposed to put an end to pay inequality based on gender. At the same time workers in school administration, learning support, nurseries, home care, cleaning, and catering – all traditionally female roles – were paid less than those in similar council employment, such as refuse collection carried out predominately by men. A tribunal decision Occupation (UK wide)

has since found that this practice was unlawful, yet the women in question have still to be compensated. In the same week that over 30,000 teachers and supporters were marching in Glasgow in support of our pay campaign, 8,000 low paid women were taking strike action to right this wrong, demanding equal pay after a decade of discrimination. The Glasgow example is not isolated. Research suggests that women are paid less than men in 90% of the UK employment sectors. This gap between the average salaries of men and the average salaries of women exists because too often certain key roles within society are defined as “women’s work”, and “women’s work” is traditionally undervalued and underpaid. A significant body of research demonstrates the effects of occupational segregation on pay. For example, whilst Mean Annual Pay

IT and Telecoms Professionals

Police Officers (sergeant and below)

it is illegal to pay workers differently based solely on their gender, there is a long-established trend indicating that male dominated industries attract higher levels. This is true even when there are comparable levels of education or training required across these industries. The table bottom left shows that industries with around 80% men earn roughly £10,000 more per year than teachers – around 80% of whom are female. Fully qualified teachers in Scotland start on £27,438 and reach the top of the main-grade salary at £36,480, meaning that even at the top end of their salary scale teachers are earning considerably less than those in other industries. Over four decades have passed since the Equal Pay Act which sought to bring parity between male and female workers in the UK. Because of determined activists, women now have full legal protections enshrining their right not to be discriminated against because of their gender. However, it is important to remember, how much still needs to be done to ensure this equality is guaranteed. The gender pay gap is real, still exists, and the teaching profession suffers from it. Teachers play a vital role within our society; this needs to be recognised and rewarded. ‘Value Education, Value Teachers,’ therefore, is a strapline that captures a campaign which is about much more than simply pay.