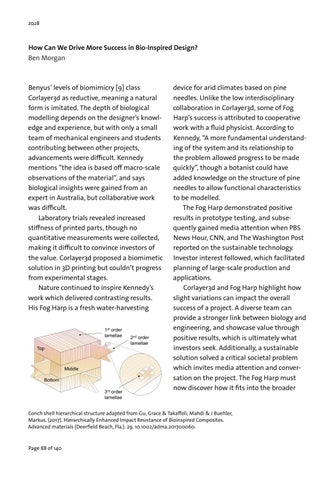 How Can We Drive More Success in Bio-Inspired Design? Ben Morgan

Benyus’ levels of biomimicry [9] class Corlayer3d as reductive, meaning a natural form is imitated. The depth of biological modelling depends on the designer’s knowledge and experience, but with only a small team of mechanical engineers and students contributing between other projects, advancements were difficult. Kennedy mentions ”the idea is based off macro-scale observations of the material”, and says biological insights were gained from an expert in Australia, but collaborative work was difficult. Laboratory trials revealed increased stiffness of printed parts, though no quantitative measurements were collected, making it difficult to convince investors of the value. Corlayer3d proposed a biomimetic solution in 3D printing but couldn’t progress from experimental stages. Nature continued to inspire Kennedy’s work which delivered contrasting results. His Fog Harp is a fresh water-harvesting

device for arid climates based on pine needles. Unlike the low interdisciplinary collaboration in Corlayer3d, some of Fog Harp’s success is attributed to cooperative work with a fluid physicist. According to Kennedy, “A more fundamental understanding of the system and its relationship to the problem allowed progress to be made quickly”, though a botanist could have added knowledge on the structure of pine needles to allow functional characteristics to be modelled. The Fog Harp demonstrated positive results in prototype testing, and subsequently gained media attention when PBS News Hour, CNN, and The Washington Post reported on the sustainable technology. Investor interest followed, which facilitated planning of large-scale production and applications. Corlayer3d and Fog Harp highlight how slight variations can impact the overall success of a project. A diverse team can provide a stronger link between biology and engineering, and showcase value through positive results, which is ultimately what investors seek. Additionally, a sustainable solution solved a critical societal problem which invites media attention and conversation on the project. The Fog Harp must now discover how it fits into the broader