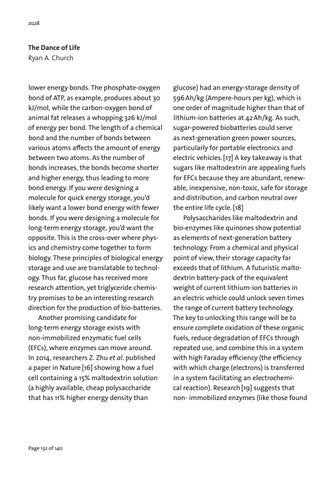 lower energy bonds. The phosphate-oxygen bond of ATP, as example, produces about 30 kJ/mol, while the carbon-oxygen bond of animal fat releases a whopping 326 kJ/mol of energy per bond. The length of a chemical bond and the number of bonds between various atoms affects the amount of energy between two atoms. As the number of bonds increases, the bonds become shorter and higher energy, thus leading to more bond energy. If you were designing a molecule for quick energy storage, you’d likely want a lower bond energy with fewer bonds. If you were designing a molecule for long-term energy storage, you’d want the opposite. This is the cross-over where physics and chemistry come together to form biology. These principles of biological energy storage and use are translatable to technology. Thus far, glucose has received more research attention, yet triglyceride chemistry promises to be an interesting research direction for the production of bio-batteries. Another promising candidate for long-term energy storage exists with non-immobilized enzymatic fuel cells (EFCs), where enzymes can move around. In 2014, researchers Z. Zhu et al. published a paper in Nature [16] showing how a fuel cell containing a 15% maltodextrin solution (a highly available, cheap polysaccharide that has 11% higher energy density than

glucose) had an energy-storage density of 596 Ah/kg (Ampere-hours per kg), which is one order of magnitude higher than that of lithium-ion batteries at 42 Ah/kg. As such, sugar-powered biobatteries could serve as next-generation green power sources, particularly for portable electronics and electric vehicles. [17] A key takeaway is that sugars like maltodextrin are appealing fuels for EFCs because they are abundant, renewable, inexpensive, non-toxic, safe for storage and distribution, and carbon neutral over the entire life cycle. [18] Polysaccharides like maltodextrin and bio-enzymes like quinones show potential as elements of next-generation battery technology. From a chemical and physical point of view, their storage capacity far exceeds that of lithium. A futuristic maltodextrin battery-pack of the equivalent weight of current lithium-ion batteries in an electric vehicle could unlock seven times the range of current battery technology. The key to unlocking this range will be to ensure complete oxidation of these organic fuels, reduce degradation of EFCs through repeated use, and combine this in a system with high Faraday efficiency (the efficiency with which charge (electrons) is transferred in a system facilitating an electrochemical reaction). Research [19] suggests that non- immobilized enzymes (like those found