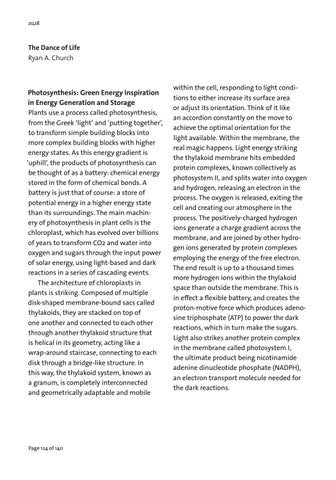 Photosynthesis: Green Energy Inspiration in Energy Generation and Storage Plants use a process called photosynthesis, from the Greek ‘light’ and ‘putting together’, to transform simple building blocks into more complex building blocks with higher energy states. As this energy gradient is ‘uphill’, the products of photosynthesis can be thought of as a battery: chemical energy stored in the form of chemical bonds. A battery is just that of course: a store of potential energy in a higher energy state than its surroundings. The main machinery of photosynthesis in plant cells is the chloroplast, which has evolved over billions of years to transform CO2 and water into oxygen and sugars through the input power of solar energy, using light-based and dark reactions in a series of cascading events. The architecture of chloroplasts in plants is striking. Composed of multiple disk-shaped membrane-bound sacs called thylakoids, they are stacked on top of one another and connected to each other through another thylakoid structure that is helical in its geometry, acting like a wrap-around staircase, connecting to each disk through a bridge-like structure. In this way, the thylakoid system, known as a granum, is completely interconnected and geometrically adaptable and mobile

within the cell, responding to light conditions to either increase its surface area or adjust its orientation. Think of it like an accordion constantly on the move to achieve the optimal orientation for the light available. Within the membrane, the real magic happens. Light energy striking the thylakoid membrane hits embedded protein complexes, known collectively as photosystem II, and splits water into oxygen and hydrogen, releasing an electron in the process. The oxygen is released, exiting the cell and creating our atmosphere in the process. The positively-charged hydrogen ions generate a charge gradient across the membrane, and are joined by other hydrogen ions generated by protein complexes employing the energy of the free electron. The end result is up to a thousand times more hydrogen ions within the thylakoid space than outside the membrane. This is in effect a flexible battery, and creates the proton-motive force which produces adenosine triphosphate (ATP) to power the dark reactions, which in turn make the sugars. Light also strikes another protein complex in the membrane called photosystem I, the ultimate product being nicotinamide adenine dinucleotide phosphate (NADPH), an electron transport molecule needed for the dark reactions.