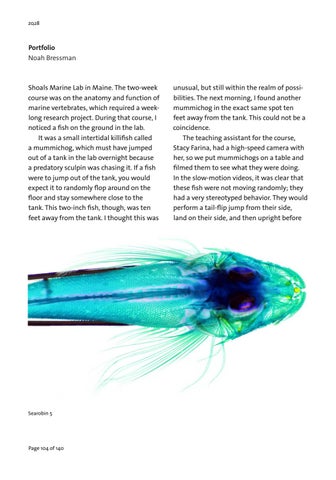 Shoals Marine Lab in Maine. The two-week course was on the anatomy and function of marine vertebrates, which required a weeklong research project. During that course, I noticed a fish on the ground in the lab. It was a small intertidal killifish called a mummichog, which must have jumped out of a tank in the lab overnight because a predatory sculpin was chasing it. If a fish were to jump out of the tank, you would expect it to randomly flop around on the floor and stay somewhere close to the tank. This two-inch fish, though, was ten feet away from the tank. I thought this was

unusual, but still within the realm of possibilities. The next morning, I found another mummichog in the exact same spot ten feet away from the tank. This could not be a coincidence. The teaching assistant for the course, Stacy Farina, had a high-speed camera with her, so we put mummichogs on a table and filmed them to see what they were doing. In the slow-motion videos, it was clear that these fish were not moving randomly; they had a very stereotyped behavior. They would perform a tail-flip jump from their side, land on their side, and then upright before