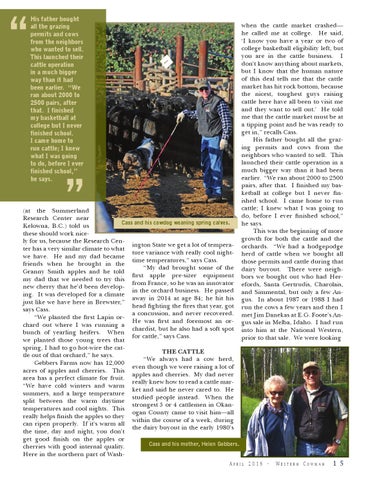 His father bought all the grazing permits and cows from the neighbors who wanted to sell. This launched their cattle operation in a much bigger way than it had been earlier. “We ran about 2000 to 2500 pairs, after that. I finished my basketball at college but I never finished school. I came home to run cattle; I knew what I was going to do, before I ever finished school,” he says.

(at the Summerland Research Center near Cass and his cowdog weaning spring calves. Kelowna, B.C.) told us these should work nicely for us, because the Research Cenington State we get a lot of temperater has a very similar climate to what ture variance with really cool nightwe have. He and my dad became time temperatures,” says Cass. friends when he brought in the “My dad brought some of the Granny Smith apples and he told first apple pre-sizer equipment my dad that we needed to try this from France, so he was an innovator new cherry that he’d been developin the orchard business. He passed ing. It was developed for a climate away in 2014 at age 84; he hit his just like we have here in Brewster,” head fighting the fires that year, got says Cass. a concussion, and never recovered. “We planted the first Lapin orHe was first and foremost an orchard out where I was running a chardist, but he also had a soft spot bunch of yearling heifers. When for cattle,” says Cass. we planted those young trees that spring, I had to go hot-wire the catTHE CATTLE tle out of that orchard,” he says. “We always had a cow herd, Gebbers Farms now has 12,000 even though we were raising a lot of acres of apples and cherries. This apples and cherries. My dad never area has a perfect climate for fruit. really knew how to read a cattle mar“We have cold winters and warm ket and said he never cared to. He summers, and a large temperature studied people instead. When the split between the warm daytime strongest 3 or 4 cattlemen in Okantemperatures and cool nights. This ogan County came to visit him—all really helps finish the apples so they within the course of a week, during can ripen properly. If it’s warm all the dairy buyout in the early 1980’s the time, day and night, you don’t get good finish on the apples or Cass and his mother, Helen Gebbers. cherries with good internal quality. Here in the northern part of Wash-

when the cattle market crashed— he called me at college. He said, ‘I know you have a year or two of college basketball eligibility left, but you are in the cattle business. I don’t know anything about markets, but I know that the human nature of this deal tells me that the cattle market has hit rock bottom, because the nicest, toughest guys raising cattle here have all been to visit me and they want to sell out.’ He told me that the cattle market must be at a tipping point and he was ready to get in,” recalls Cass. His father bought all the grazing permits and cows from the neighbors who wanted to sell. This launched their cattle operation in a much bigger way than it had been earlier. “We ran about 2000 to 2500 pairs, after that. I finished my basketball at college but I never finished school. I came home to run cattle; I knew what I was going to do, before I ever finished school,” he says. This was the beginning of more growth for both the cattle and the orchards. “We had a hodgepodge herd of cattle when we bought all those permits and cattle during that dairy buyout. There were neighbors we bought out who had Herefords, Santa Gertrudis, Charolais, and Simmental, but only a few Angus. In about 1987 or 1988 I had run the cows a few years and then I met Jim Danekas at E.G. Foote’s Angus sale in Melba, Idaho. I had run into him at the National Western, prior to that sale. We were looking 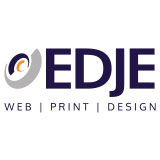