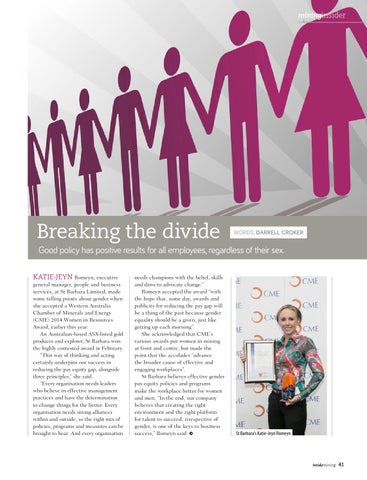 Good policy has positive results for all employees, regardless of their sex. KATIE-JEYN Romeyn, executive general manager, people and business services, at St Barbara Limited, made some telling points about gender when she accepted a Western Australia Chamber of Minerals and Energy (CME) 2014 Women in Resources Award, earlier this year. An Australian-based ASX-listed gold producer and explorer, St Barbara won the highly contested award in February. “This way of thinking and acting certainly underpins our success in reducing the pay equity gap, alongside three principles,” she said. “Every organisation needs leaders who believe in effective management practices and have the determination to change things for the better. Every organisation needs strong alliances within and outside, so the right mix of policies, programs and measures can be brought to bear. And every organisation

needs champions with the belief, skills and drive to advocate change.” Romeyn accepted the award “with the hope that, some day, awards and publicity for reducing the pay gap will be a thing of the past because gender equality should be a given, just like getting up each morning”. She acknowledged that CME’s various awards put women in mining at front and centre, but made the point that the accolades “advance the broader cause of effective and engaging workplaces”. St Barbara believes effective gender pay equity policies and programs make the workplace better for women and men. “In the end, our company believes that creating the right environment and the right platform for talent to succeed, irrespective of gender, is one of the keys to business success,” Romeyn said. 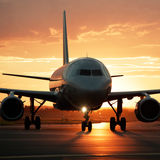