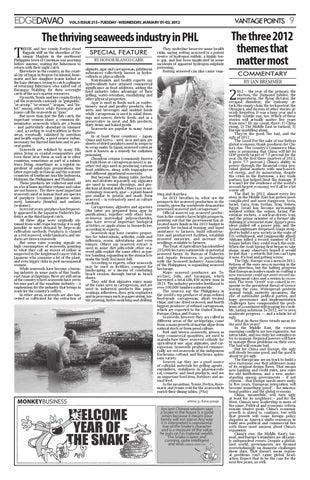 The thriving seaweeds industry in PHL

ESSIE and her cousin Evelyn stood flagpole stiff on the shoreline of Barangay Maglaoi in the northwest Philippine town of Currimao one morning before sunrise, waiting for fishermen to return with their night catch. Elsewhere in the country, in the coastal city of Sagay in Negros Occidental, Rosemarie and her daughter Jeanie looked at the hazy distance, trying to catch a glimpse of returning fishermen who sailed out of Barangay Makiling for their overnight catch of the sea’s marine resources. up north, Tessie and her cousin Evelyn call the seaweeds variously as ”pokpoklo,” “ar-arusip,” “or-ormot,” “aragan,” and “kulot,” among others while Rosemarie and Jeanie call the seaweeds as “guso.” But more than just the fish catch, the expectant women share a common denominator: seaweeds which are a bonus – and particularly abundant in summer – and, according to oral tradition in these areas, eventually validated by nutrition and health experts, a good source iodine, necessary for thyroid function and to prevent goiter. Seaweeds are relished by many Filipinos living in coastal communities and even those near them as well as in other countries, sometimes as part of a subsistence living, sometimes as a regular ingredient of salad-type preparations, the latter especially in hawaii and the warmer countries of Southeast Asia like Indonesia, Malaysia, the Philippines and Thailand. These products are collected and sold on a local basis and their volume and value are not known. The three most important seaweeds used as human food are species of porphyra (common Japanese name, nori), laminaria (kombu) and undaria (wakame). In recent years, porphyra has frequently appeared in the Japanese Fisheries Statistics as the third largest catch. All three algae were originally obtained from wild crops but today it is only possible to meet demand by large-scale cultivation methods. Porphyra is classed as a red seaweed, while laminaria and undaria are brown seaweeds. But some raise warning signals on high consumption of seaweeds, pointing to what they call an excess of iodine is suspected in the heightened cancer risk in Japanese who consume a lot of the plant, and even bigger risks in post-menopausal women. While seaweeds have become a booming industry in some parts of this Southeast Asian archipelago, there are still areas of the country where seaweeds have yet to become part of the sunshine industry – a euphemism for the industry that brings in wads for the country’s coffers. In other areas, seaweeds are also harvested or cultivated for the extraction of

SPECIAL FEATURE By Honor Blanco caBie alginate, agar and carrageenan, gelatinous substances collectively known as hydrocolloids or phycocolloids. Nutritionists and health experts say hydrocolloids have attained commercial significance as food additives, adding the food industry takes advantage of their gelling, water-retention, emulsifying and other physical properties. Agar is used in foods such as confectionery, meat and poultry products, desserts and beverages and molded foods while carrageenan is used in salad dressings and sauces, dietetic foods, and as a preservative in meat and fish products, dairy items and baked goods. Seaweeds are popular in many Asian plates. In at least three countries – Japan, China and Korea – nori, zicai and gim are sheets of dried porphyra used in soups or to wrap sushi. In Japan, seaweed eaten as nori is known as a remedy for radiation poisoning. Chondrus crispus (commonly known as Irish Moss or carrageenan moss) is another red alga used in producing various food additives, along with kappaphycus and different gigartinoid seaweeds. But beyond the dining table, herbalists and dentists separately say alginates are used in wound dressings, and production of dental molds. Others say in microbiology research, agar -- a plant-based goo similar to gelatin and made from seaweed -- is extensively used as culture medium. Carrageenans, alginates and agaroses (the latter are prepared from agar by purification), together with other lesser-known macroalgal polysaccharides, also have several important biological activities or applications in biomedicine, according to experts. Seaweeds may have curative properties for tuberculosis, arthritis, colds and influenza, worm infestations and even tumors. Others say seaweed extract is used in some diet pills.while other seaweed pills exploit the same effect as gastric banding, expanding in the stomach to make the body feel more full. According to experts, other seaweeds may be used as fertilizer, compost for landscaping, or a means of combating beach erosion through burial in beach dunes. They add that alginates enjoy many of the same uses as carrageenan, and are used in industrial products like paper coatings, adhesives, dyes, gels, explosives and in processes such as paper sizing, textile printing, hydro-mulching and drilling.

They underline however some health risks, saying rotting seaweed is a potent source of hydrogen sulfide, a highly toxic gas, and has been implicated in some incidents of apparent hydrogen-sulphide poisoning. Rotting seaweed can also cause vom-

The three 2012 themes that matter most COMMENTARY By ian Bremmer

iting and diarrhea. As 2013 breathes in, what are the prospects for seaweed production in the country, given the worldwide demand for processed seaweed and carrageenan? Official sources say seaweed production in the country faces bright prospects, pointing out that the government has allocated more funds in the 2013 budget to provide for technical training and input assistance to farmers, build infrastructure and postharvest facilities, establish seaweed nurseries, and increase the seedlings available to farmers. The Dept. of Agriculture has identified 255,000 hectares nationwide as potential seaweed farms. Its Bureau of Fisheries and Aquatic Resources, in partnership with the Seaweed Industry Association of the Philippines, is expanding seaweed hectarage. Major seaweed producers are Tawi-Tawi, Sulu, and Sarangani, which harvested a total 686,450 metric tons in 2011. The industry provides livelihood to over 100,000 families nationwide. The sources say the Philippines is the world’s top producer of semi-refined food-grade carrageenan, alkali treated chips, and raw dried seaweed, and fourth biggest producer of refined carrageenan, which are exported to the united States, Europe, China, and France. Seaweeds, however they are called in different areas of the archipelago, come from a mass growth of marine algae from natural stock or from pond culture. Red and brown seaweeds, grown in large commercial quantities, are used to manufacture three seaweed colloids for agricultural use: agar, alginates, and carrageenan. Seaweeds produced commercially are red seaweeds of the indigenous Eucheuma cottonii and Euchema spinosum variety. Sources say they are a good source of colloidal materials for gelling agents , emulsifiers, stabilizers in pharmaceutical, cosmetic and food products, and are an important food item, fertilizer and animal feed. In the meantime, Tessie, Evelyn, Rosemarie and Jeanie wait for the seaweeds to enrich their dining tables. [PNA]

012 – the year of the primary, the election, the Diamond Jubilee, the superstorm, the flying dictator, the escaped dissident, the embassy attack, the empty chair, the tech protest, the Olympics, and dozens of other stories already forgotten. It was a busy year and a terribly volatile one, too. Which of these stories will actually matter five years from now? By my count, three: 1) China rising, 2) The Middle East in turmoil, 3) Europe muddling along. They’re the good, the bad, and the ugly of 2012. The Good: For the sake of our listless global economy, thank goodness for China’s rise. The country’s Commerce Minister is promising that China will hit its GDP growth target of 7.5 percent for the year. (In the first three quarters of 2012, it grew 7.7 percent.) China’s ability to power through the financial crisis provided global markets with much-needed energy, and its momentum, despite the crisis in the Eurozone, a key trade partner, has helped limit the damage. If it wasn’t for the resilience of the world’s second-largest economy, we’d all be a lot worse off. The Bad: In 2012, almost every key story in the Middle East has gotten more complicated and more dangerous. Syria, Israel, Gaza, Iran, Jordan, Iraq, yemen, Egypt. Israel has become increasingly isolated within the region, facing Palestinian rockets, a nuclear-driven Iran, and the prime minister of a former ally dubbing it ‘a terrorist state’. Egypt’s president pulled off a power play, and the Syrian nightmare deepened. Iraqis struggled to build a new society in the wake of u.S. withdrawal, and (supposedly allied) Afghans killed a record number of u.S. troops before they could reach the exits. When the Arab Spring first began to take shape, many observers hoped it would be just that – a rebirth. But you can’t spin it now. It’s bad and getting worse. The ugly: Europe was a mess in 2012. Reform of the euro area is moving in the right direction, but the halting progress that European leaders made in crafting a new eurozone could not avert record unemployment rates and a return to recession. The term ‘Grexit’ was coined in response to the persistent threat of Greece leaving the euro. Widespread protests against tough austerity measures, the rise of nationalist political parties, and huge governance and implementation challenges have compounded the problems of a continent still groping for credible, lasting solutions. In 2012, we’ve seen moderate progress — and a whole lot of ugly. What do these three trends mean for the next five years? In the Middle East, the various emerging conflicts are too expensive, too intractable, and too risky for outsiders to try to manage. Regional powers will have to manage these problems on their own. The bad will remain bad. But for China and Europe, the ugly will slowly become good, and the good is about to get ugly. The Europeans are on track to build a new eurozone, one that addresses many of its original design flaws. That means new banking and credit rules, new roles for old institutions, and a new understanding among governments – if not citizens – that Europe needs more unity. In five years, European integration will become something ‘good’ – for international politics and the global economy. China, meanwhile, will turn ugly, at least for its neighbors – and for the West. China’s new leadership is more of the same. Political and economic reform remain elusive goals. China’s economic growth is slated to continue, but with that growth will come foreign policy disputes as America shifts resources to build new political and commercial ties with those most anxious about China’s expansion. China’s rise, the Middle East’s turmoil, and Europe’s stumbles are all largely independent events. Despite a globalized world, governments are focused overwhelmingly on domestic challenges these days. That doesn’t mean regional problems can’t cause global headaches. Expect that to be the case for the next five years, as well. 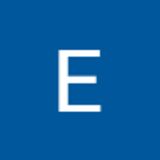