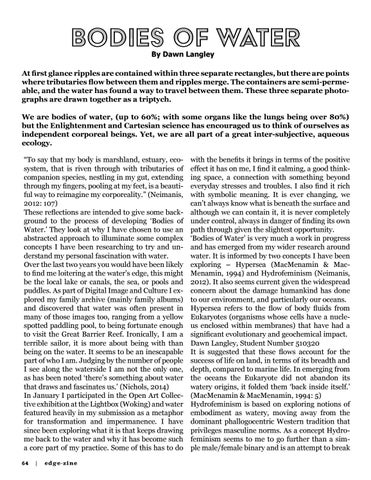 Bodies of Water By Dawn Langley

At first glance ripples are contained within three separate rectangles, but there are points where tributaries flow between them and ripples merge. The containers are semi-permeable, and the water has found a way to travel between them. These three separate photographs are drawn together as a triptych. We are bodies of water, (up to 60%; with some organs like the lungs being over 80%) but the Enlightenment and Cartesian science has encouraged us to think of ourselves as independent corporeal beings. Yet, we are all part of a great inter-subjective, aqueous ecology. “To say that my body is marshland, estuary, ecosystem, that is riven through with tributaries of companion species, nestling in my gut, extending through my fingers, pooling at my feet, is a beautiful way to reimagine my corporeality.” (Neimanis, 2012: 107) These reflections are intended to give some background to the process of developing ‘Bodies of Water.’ They look at why I have chosen to use an abstracted approach to illuminate some complex concepts I have been researching to try and understand my personal fascination with water. Over the last two years you would have been likely to find me loitering at the water’s edge, this might be the local lake or canals, the sea, or pools and puddles. As part of Digital Image and Culture I explored my family archive (mainly family albums) and discovered that water was often present in many of those images too, ranging from a yellow spotted paddling pool, to being fortunate enough to visit the Great Barrier Reef. Ironically, I am a terrible sailor, it is more about being with than being on the water. It seems to be an inescapable part of who I am. Judging by the number of people I see along the waterside I am not the only one, as has been noted ‘there’s something about water that draws and fascinates us.’ (Nichols, 2014) In January I participated in the Open Art Collective exhibition at the Lightbox (Woking) and water featured heavily in my submission as a metaphor for transformation and impermanence. I have since been exploring what it is that keeps drawing me back to the water and why it has become such a core part of my practice. Some of this has to do 64

with the benefits it brings in terms of the positive effect it has on me, I find it calming, a good thinking space, a connection with something beyond everyday stresses and troubles. I also find it rich with symbolic meaning. It is ever changing, we can’t always know what is beneath the surface and although we can contain it, it is never completely under control, always in danger of finding its own path through given the slightest opportunity. ‘Bodies of Water’ is very much a work in progress and has emerged from my wider research around water. It is informed by two concepts I have been exploring – Hypersea (MacMenamin & MacMenamin, 1994) and Hydrofeminism (Neimanis, 2012). It also seems current given the widespread concern about the damage humankind has done to our environment, and particularly our oceans. Hypersea refers to the flow of body fluids from Eukaryotes (organisms whose cells have a nucleus enclosed within membranes) that have had a significant evolutionary and geochemical impact. Dawn Langley, Student Number 510320 It is suggested that these flows account for the success of life on land, in terms of its breadth and depth, compared to marine life. In emerging from the oceans the Eukaryote did not abandon its watery origins, it folded them ‘back inside itself.’ (MacMenamin & MacMenamin, 1994: 5) Hydrofeminism is based on exploring notions of embodiment as watery, moving away from the dominant phallogocentric Western tradition that privileges masculine norms. As a concept Hydrofeminism seems to me to go further than a simple male/female binary and is an attempt to break 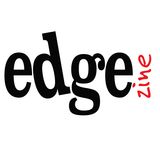 The seventh issue of edge-zine, a student led publication featuring and showcasing works of students, alumni and tutors of the Open College...

The seventh issue of edge-zine, a student led publication featuring and showcasing works of students, alumni and tutors of the Open College...