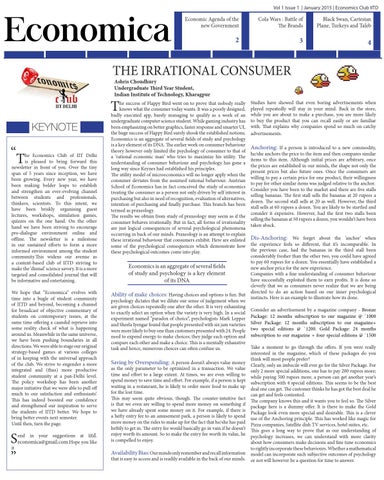 Economic Agenda of the new Government

Cola Wars : Battle of The Brands

he Economics Club of IIT Delhi is pleased to bring forward this newsletter in front of you. Over the tiny span of 5 years since inception, we have been growing. Every new year, we have been making bolder leaps to establish and strengthen an ever-evolving channel between students and professionals, thinkers, scientists. To this intent, we have been briskly organising guest lectures, workshops, simulation games, quizzes on the one hand. On the other hand we have been striving to encourage pro-dialogue environment online and offline. The newsletter is a milestone in our sustained efforts to form a more informed environment among the student community.This widens our avenue as a content-based club of IITD striving to make the ‘dismal’ science savory. It is a more targeted and consolidated journal that will be informative and entertaining. We hope that “Economica” evolves with time into a bugle of student community of IITD and beyond, becoming a channel for broadcast of objective commentary of students on contemporary issues, at the same time offering a caandid reprieve into some reality check of what is happening around us. Meanwhile in the same universe, we have been pushing boundaries in all directions. We were able to stage our original strategy-based games at various colleges of in keeping with the universal approach of the club. We strive to engender a more integrated and (thus) more productive student community at a pan-Delhi level. The policy workshop has been another major initiative that we were able to pull off much to our satisfaction and enthusiasts’. This has indeed boosted our confidence and strengthened our inspiration to serve the students of IITD better. We hope to bring better events next semester. Until then, turn the page.

end in your suggestions at iitd. economica@gmail.com.Hope you like

he success of Flappy Bird went on to prove that nobody really knows what the consumer today wants. It was a poorly designed, badly executed app, barely managing to qualify as a work of an undergraduate computer science student. While gaming industry has been emphasizing on better graphics, faster response and smarter UI, the huge success of Flappy Bird surely shook the established notions. Economics is an aggregate of several fields of study and psychology is a key element of its DNA. The earlier work on consumer behaviour theory however only limited the psychology of consumer to that of a ‘rational economic man’ who tries to maximize his utility. The understanding of consumer behaviour and psychology has gone a long way since Keynes had established his principles. The utility model of microeconomics will no longer apply when the consumer deviates from the assumed rational behaviour. Austrian School of Economics has in fact conceived the study of economics treating the consumer as a person not only driven by self interest in purchasing but also in need of recognition, evaluation of alternatives, intention of purchasing and finally purchase. This branch has been termed as praxeology. The results we obtain from study of praxeology may seem as if the consumer behaves irrationally. But in fact, all forms of irrationality are just logical consequences of several psychological phenomena occurring in back of our minds. Praxeology is an attempt to explain these irrational behaviour that consumers exhibit. Here are enlisted some of the psychological consequences which demonstrate how these psychological outcomes come into play.

Economics is an aggregate of several fields of study and psychology is a key element of its DNA Ability of make choices: Having choices and options is fun. But

psychology dictates that we dilute our sense of judgement when we are given choices repeatedly one after the other. It is very exhausting to exactly select an option when the variety is very high. In a social experiment named “paradox of choice”, psychologists Mark Lepper and Sheela Iyengar found that people presented with six jam varieties were more likely to buy one than customers presented with 24. People need to expend energy to make choices; they judge each option and compare each other and make a choice. This is a mentally exhaustive task and hence, numerous choices can often confuse us.

as the only parameter to be optimized in a transaction. We value time and effort to a large extent. At times, we are even willing to spend money to save time and effort. For example, if a person is kept waiting in a restaurant, he is likely to order more food to make up for the lost time. This may seem quite obvious, though. The counter-intuitive fact is that we even are willing to spend more money on something if we have already spent some money on it. For example, if there is a hefty entry fee to an amusement park, a person is likely to spend more money on the rides to make up for the fact that he/she has paid heftily to get in. The entry fee would basically go in vain if he doesn’t enjoy worth its amount. So to make the entry fee worth its value, he is compelled to enjoy.

Availability Bias: Our minds only remember and recall information

that is easy to access and is readily available in the back of our minds.

Studies have showed that even boring advertisements when played repeatedly will stay in your mind. Back in the store, while you are about to make a purchase, you are more likely to buy the product that you can recall easily or are familiar with. That explains why companies spend so much on catchy advertisements.

Anchoring: If a person is introduced to a new commodity,

he/she anchors the price to the item and then compares similar items to this item. Although initial prices are arbitrary, once the prices are established in our minds, the shape not only the present prices but also future ones. Once the consumers are willing to pay a certain price for one product, their willingness to pay for other similar items was judged relative to the anchor. Consider you have been to the market and there are five stalls selling bananas. The first stall sells the bananas at 20 rupees a dozen. The second stall sells at 20 as well. However, the third stall sells at 60 rupees a dozen. You are likely to be startled and consider it expensive. However, had the first two stalls been selling the bananas at 50 rupees a dozen, you wouldn’t have been taken aback.

Dis-Anchoring: We forget about the ‘anchor’ when

the experience feels so different, that it’s incomparable. In the previous case, had the bananas in the third stall been considerably fresher than the other two, you could have agreed to pay 60 rupees for a dozen. You essentially have established a new anchor price for the new experience. Companies with a fine understanding of consumer behaviour have successfully exploited them to earn profits. It is done so cleverly that we as consumers never realize that we are being directed to do an action based on our inner psychological instincts. Here is an example to illustrate how its done. Consider an advertisement by a magazine company - Bronze Package: 12 months subscription to our magazine @ `1000 Silver Package: 12 months subscription to our magazine+ two special editions @ `1200. Gold Package: 24 months subscription to our magazine + four special editions @ `1500 Take a moment to go through the offers. If you were really interested in the magazine, which of these packages do you think will most people prefer? Clearly, only an imbecile will ever go for the Silver Package. For only 2 more special additions, one has to pay 200 rupees more; while paying 500 rupees more, a person can get another year’s subscription with 4 special editions. This seems to be the best deal one can get. The customer thinks he has got the best deal he can get and feels contented. The company knows this and it wants you to feel so. The Silver package here is a dummy offer. It is there to make the Gold Package look even more special and desirable. This is a clever use of the Anchoring principle. This has worked like magic for Pizza companies, Satellite dish TV services, hotel suites, etc. This goes a long way to prove that as our understanding of psychology increases, we can understand with more clarity about how consumers make decisions and fine tune economics to rightly incorporate these behaviours. Whether a mathematical model can incorporate such subjective outcomes of psychology or not will however be a question for time to answer. 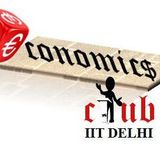