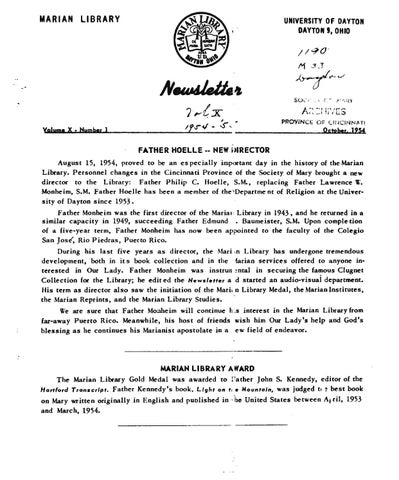 FATHER HOELLE·· HEW HIRECTOR August 15, 1954, proved to be an especially important day in the history of the Marian Library. Personnel changes in the Cincinnati Province of the Society of Mary brought a new director to the Library: Father Philip C. Hoelle, S.M., replacing Father Lawrence , .• Monheim, S.M. Father Hoelle has been a member of thel'Departme nt of Religion at the Univer· sity of Dayton since 1953. Father Monheim was the first director of the Mariat: Library in 1943, and he returned in a similar capacity in 1949, succeeding Father Edmund • Baumeister, S.M. Upon completion of a five-year term, Father Monheim has now been appointed to the faculty of the Colegio San Jose", Rio Piedras, Puerto Rico. During his last five years as director, the Mari •n Library has undergone tremendous development, both in its book collection and in the .farian services offered to anyone in· terested in Our Lady. Father Monheim was instrun :ntal in securing the famous Clugnet Collection for the Library; he edited the Newsfettttr a .d started an audio·visuai department. His term as director also saw the initiation of the Mari• n Library Medal, the Marian Institutes, the Marian Reprints, and the Marian Library Studies. , We are sure that Father Moaheim will continue h ~s interest in the Marian Library from far-away Puerto Rico. Meanwhile, his host of friends wish him Our Lady's help and God's blessing as he continues his Marianist apostolate in a ew field of endeavor. 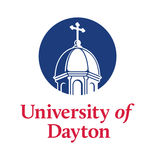